Living in Nara as I do I get to know some of the local residents in my local neighborhood and one I have got to know is a lively seventy-year old Japanese woman, who's a member of a religious church group that practices a form of spiritual healing. A few weeks ago she invited me to an exhibition that her group was putting on in Nara at their local center. It was an exhibition of flowers, more specifically ikebana, or the art of flower arranging. I thought I would go along and have a look.

The hall is about a 15-20 minute walk south of Kintetsu Ayameike station and close to a fairly large lake. I parked my bicycle and there were many people around, manning the reception desk and serving food and drinks. I had an invitation card so I handed it in at the table and received a voucher to exchange for some chemical free organic vegetables. This religion practices gardening too!

Inside the main hall there were many people milling around and in the middle of the room were people sitting on chairs facing each other. One person had her hand raised in front of herself, and through the use of synergistic energy was able to provide comfort and relaxation from stress to the other person. The healing process took about twenty minutes from beginning to end.

When I was finished I walked around the room and there were many displays of ikebana designs. Some were in tall pots while others were in low shallow trays and of many different colors and styles. They looked incredibly beautiful.

The oldest school of Ikebana (living flower) is said to be Ikenobo, founded by a Buddhist priest in the 15th century, one of several schools of ikebana thought. The “rikka” style (standing) was said to be one of his inventions and developed as a Buddhist expression of nature with seven branches, representing hills, waterfalls, valleys etc. A more simplified style called seika or shoka uses only three main branches representing ten (heaven), chi (land), and jin (man) to show the beauty of the plant itself . Another form is nagaire, used in the tea ceremony. There are two basic styles. The moribana shallow base style and the nageire tall vase style.  Branches are trimmed and the flowers are selected for their asthetic qualities and to create a certain feel or ambience as they combine with other flowers in the pot. In one of the rooms I was able to try creating my own ikebana vase where you could choose the flowers such as a lily or a rose and decorate them with a small white flower.

Ikebana is about being in tune with nature, making beautiful things and you can study for many years in learning to make the quintessential art form. Before I left I sat down and had some “maccha” green tea and a Japanese rice-cake (o-mochi) which went down very well, a nice ending to an interesting day. 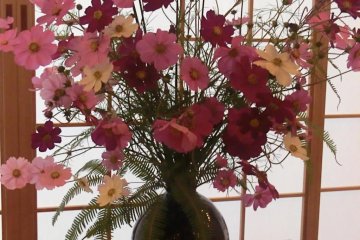 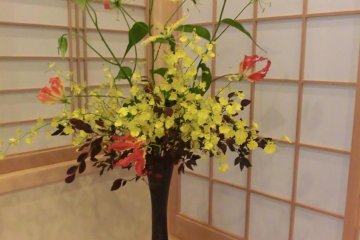 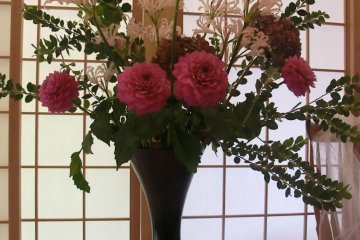 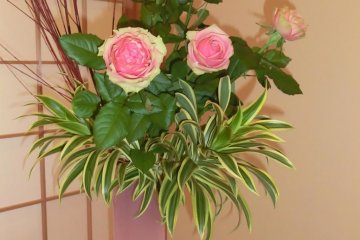 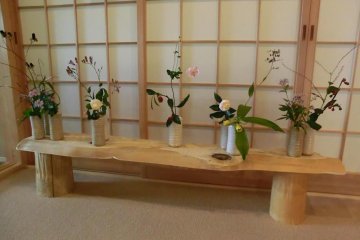 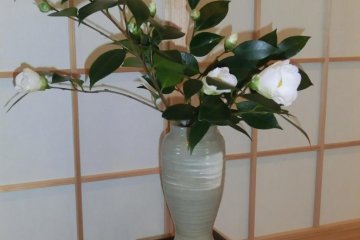 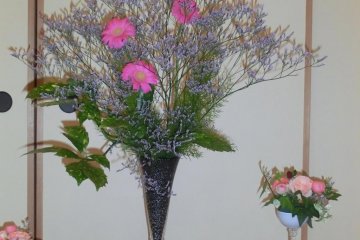 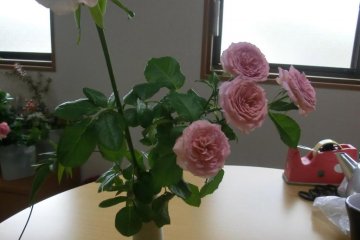 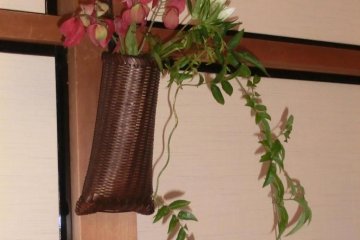 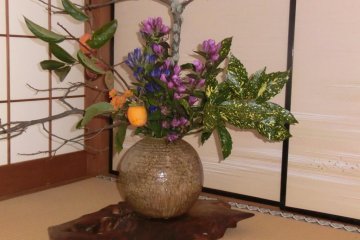