When my wife and I learned we were going to become fresh new grandparents, she did a little “reverse engineering” to come up with the optimal date to pray for our daughter’s easy labor and safe delivery. I’ve been through my wife’s own two pregnancies, but in all the decades that I’ve lived in Japan, I don’t recall ever hearing about the custom of praying for an easy labor on a dog-day. Gee, where have I been all these years?

Turns out, it works like this: In addition to the oriental zodiac’s rotation of animals in a twelve-year cycle -- which I suppose most readers will probably have heard of -- those same animals are re-purposed for a twelve-day cycle, too, meaning that each animal will have its day a minimum of twice a month. Since dogs with their big litters represent easy delivery, it only stands to reason that the dog days of your pregnancy’s fifth month are the best days to pray for this for yourself, too.

This was all news to me, truly. Since then I’ve learned that there are other Shinto shrines or Buddhist temples in different regions also catering to expectant mothers, but in Nara the go-to temple is this one, Obitoke-dera. It dates back to the year 858, which would put its foundation well into the Heian Period, after the Imperial capital had moved from Nara to Kyoto. Anyway, it seems that one of the empresses of those days, Empress Fujiwara Akiko, trekked all the way to Nara to pray here, and her resulting successful, safe delivery put Obitoke-dera permanently on the map. In modern times, the current empress too -- Empress Michiko --  is said to have made the trek here from Tokyo.

As temples go, it’s not such a big one, but its unique niche keeps it busy. According to the English handout, there are separate fees for “general” admission and “special exhibition special visit” admission, but my wife and I were able to walk right up to the donation box at the main hall without buying any tickets or paying any kind of fee. Just inside, however, there is a closed door, behind which we could hear some goings-on; I presume that’s what the admission is all about. Not listed on the English handout, there is also a menu of prayer recital options, priced by duration.

As with other temples in Japan, Obitoke-dera has a side-shop selling amulets (o-mamori) and other souvenirs. In addition to ordinary amulets of the usual folded-cloth style, this shop also features an easy-labor amulet in the shape of a dog -- and the pièce de résistance, a line of corsets (the “obi” of obitoke). In the old days, it was thought that binding the abdomen tightly would keep the fetus small and thus ensure an easy delivery. (So much for folk medicine, eh?) Nowadays, the corsets are designed for support rather than constriction, they say.

So, the next time you're feeling pregnant, you know where to go -- and when. Obitoke-dera is a short walk north of Obitoke station, the second stop from JR Nara on the Sakurai line. 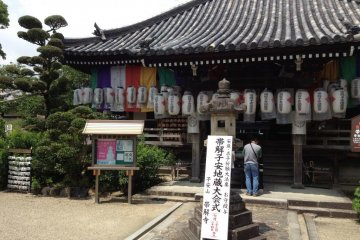 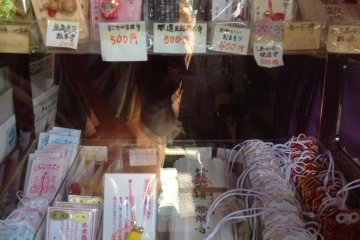 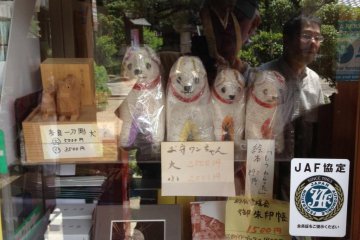 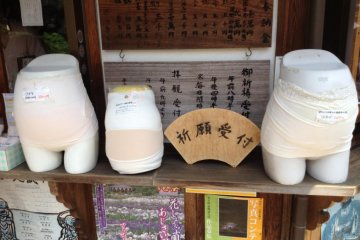