The Yamato region in Nara prefecture is well-known for being the birthplace of ancient Japan and Japanese culture. Thousand year-old traditions as sumo, Japanese Buddhism, sake, rice and tea all originated here during the Asuka and Nara periods. Vast valleys of land surrounded by old mountains, Yamato is a place where you can feel the core of Japanese culture. There is rich historical significance that still exists today from the oldest Shinto sanctuary in Japan, the Omiwa-jinja Shrine, to the ancient road used by the imperial messengers, the Yamanobe-no-michi. The former capitals of Asuka and Fujiwara are also both found in this region.

The Omiwa-jinja Shrine located in Sakurai City has offered sake, Japanese alcohol made from fermented rice, for more than a thousand year and counting. At the worship hall, a gigantic ball made from cedar, weighing more than 200 kg, greets visitors. Makers and sellers of sake usually have a smaller ball shaped decoration at the entrance of their shops. This tradition is renewed annually and ensures that the sake of the year will be of excellent quality. It also lets visitors know when a fresh brew of sake has been produced. This is one of the few shrines in Japan without any main hall. The hall is replaced by direct access to Mount Miwa, the deity revered in the shrine.

The Omiwa-jinja Shrine, as many destinations in Yamato, was also a scene for numerous legends and tales. Among them is the story of the princess Iku-tama-yori-bime. Famous for her incomparable beauty, the story tells of a man who would visit her every night and disappear without a trace by morning. The two fell in love and she eventually became pregnant without ever knowing the man's true identity. She and her parents worked to discover the identity of her mysterious visitor. When he appeared next, she attached a needle to his kimono sleeve linked to a spindle of hemp thread. The next morning he was gone with only three loops of thread remaining around the spindle. Following the thread trail, she reached the Mount Miwa and realized that her lover was the god of Mount Miwa himself, O-mono-nushi.

Visitors are welcome to climb the sacred Mount Miwa which starts from one end of the ancient road, Yamanobe no michi. At the bottom of the mountain, nearby the Sai-jinja Shrine there is a path to start hiking the mountain. Pictures, food and drinks are prohibited along the sacred grounds and the trail is often taken in complete silence for a truly serene and spiritual experience. Nearby the shrine and the start of the path is a famous stream known for the purity of its water. Be sure to try some of the water by bringing a bottle yourself.

Hiking on the Yamanobe no michi outside of Mount Miwa is also an interesting experience. The ancient road of imperial messengers connected the neighboring lands by cutting between the mountains. A road running north and south along the eastern edge the Nara Basin, connedting Mount Miwa in Sakurai City and Mount Kasuga in Nara City. It is said to be “the oldest road in Japan” because it is the oldest road to be mentioned in the Chronicles of Japan. The most common hike for visitors connects Sakurai to Tenri, for a moderate 16 km walk. It is an adorably narrow road, winding between rice fields and farms. Here and there along the path you will find small stands where local farmers have their production of vegetable and fruits on sale for passersby. The road passes by shrines and a mausoleum as well. Be prepared as there are few restaurants or cafes outside of the starting and end points of the trail. Conveniently, there also is a delicious soumen restaurant at the entrance of Oomiwa-jinja Shrine. Soumen are thin wheat noodles, eaten in hot soup with vegetables in winter and cold soy sauce in summer. Quite delicious and always adapted to the season!

From the Oomiwa-jinja Shrine, you can also see the three mountains of Yamato : Unebi, Miminashi and Kagu. It’s between those three mountains where the ancient imperial capital, Fujiwara-kyo, currently Kashihara City, was founded. Slightly further out, along the Asuka River, is the village of Asuka, ancient capitol of Japan before Nara and Kyoto were capitals. Known for its thousand year-old graves and its charming landscapes of traditional houses next to rice fields covered with flowers, Asuka is yet another beautiful and historic location of the Yamato Region.

The Yamato region is easily accessible by trains from Nara, Kyoto or Osaka. For the Oomiwa-jinja shrine and the Yamanobe no michi, take the JR train from Nara to Miwa Station. Or take the Kintetsu line from Sakurai, then change for the JR line and get off at Miwa station.

The shrine is 10 minutes walk away from the station. For Kashihara and Asuka, take the Kintetsu line up to Yamato Yagi Station or Asuka Station. From there, walk 30 to 40 minutes up to Fujiwara-kyo or rent bicycles at the station and explore Asuka village by bike. 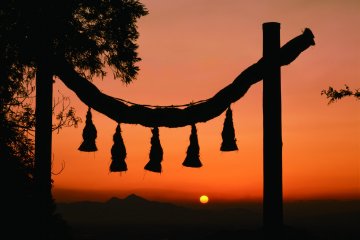 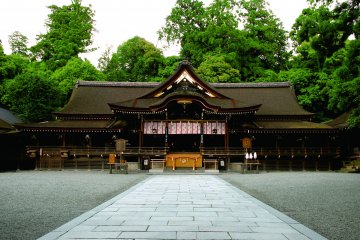 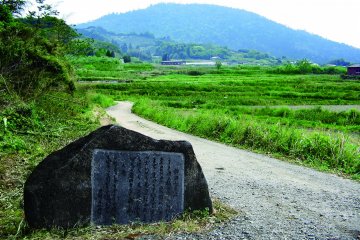 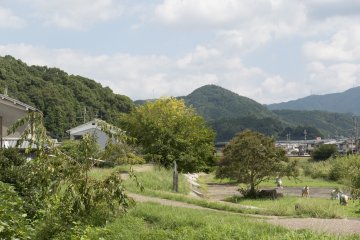 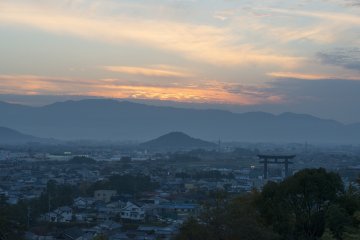 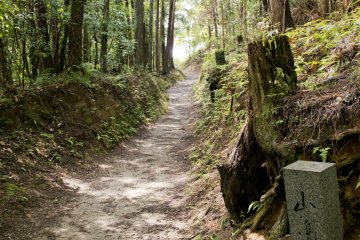 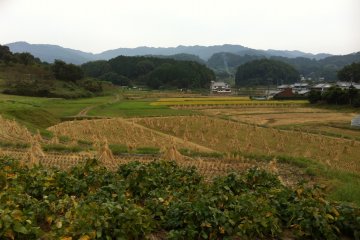 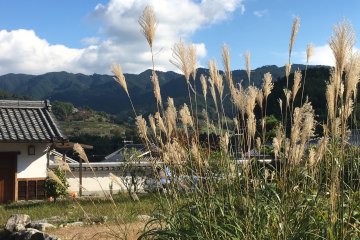 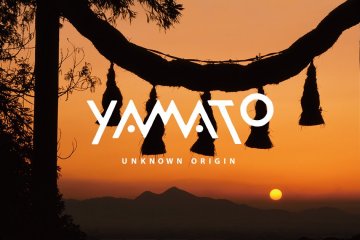