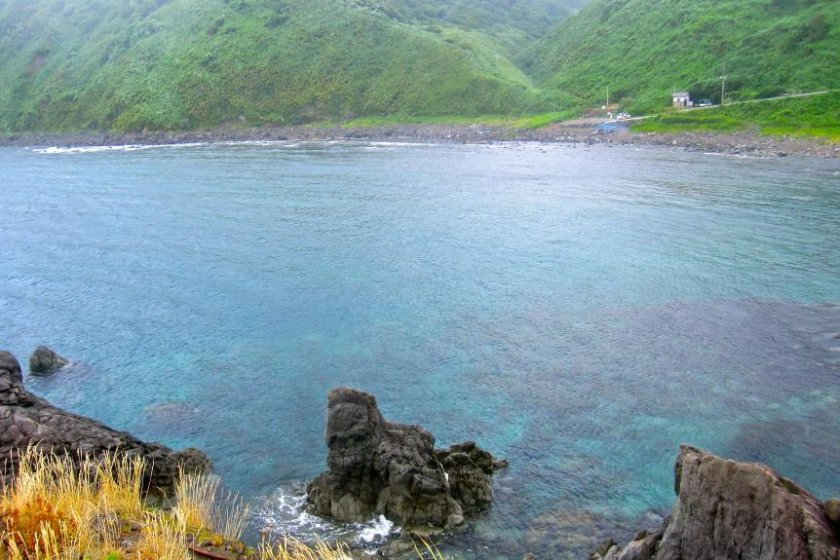 Kamaya Beach and campground and the blue water of the cove

​Waves blown up by a light rainstorm set the ferry rocking. Occasionally, a larger wave would send a blast of spray up to the main deck two stories above. The kids gathered along the railing squealed with surprise and delight as they were hit by the refreshing water. Every now and again, a flying fish, startled by the ferry, would appear suddenly above the surface of the water, and float silently above the waves for several seconds before disappearing into the blue as if it had never been. On both sides of the ferry, flocks of aerobatic albatross navigated the troughs between waves, their wingtips skimming centimeters off the surface of the water as they hunted for fish. A Blue Angel pilot only wishes he could fly this well. Mainland Japan was hidden by gray clouds, but no one was worried. The ferry ride through the wind, the light rain, and the spray from the waves provided a most welcome relief from summer’s oppressive heat and humidity.

Actually, that's how this story ends. It began with an email from a couch surfer (see couchsurfing.org) asking me about places to camp in Niigata city. A few correspondences later and a camping trip to Awashima had spontaneously formed.

I picked my couch surfer up the next morning, shopped for some campfire food and supplies, and made the hour and a half drive to Iwafune Port in Murakami for the 90-minute, ¥1830 ferry ride to Awashima.

Located 35km off the coast of Murakami, with a circumference of just 23km, and with a population of only 348, Awashima is the smallest most remote body of land I've ever set foot on. And also one of the most beautiful.

After speaking to a family of tourists from Chiba and the owner of their ryokan, my couch surfer scored us a free ride from Uchiura Village on the side of the island facing Japan, to Kamaya Village on the opposite side. The drive along the steep, mountainous coastline around the south end of Awashima was breathtaking. I have only been to 2 other places where the water was as clear and blue.

Kamaya Campground is a rocky crescent moon-shaped beach tucked between two mountainous capes. The rock formations on one side and the mountain on other augmented the sunset spectacularly. A cold fresh water spring that has been modified with a raised platform and spouts (making refilling your water bottle easy), and a bathroom complete Kamaya Campground's amenities. The village of Kamaya itself is also only a 10 minute walk away.

Once our tent was built, the campfire burning, dinner finished and the sun long set, my couch surfer and I turned our faces skywards. With functionally no light pollution to spoil the view, the sky was more star-filled than I can describe, and shooting stars from the Leonid Meteor Shower were especially vivid. We saw several quite spectacular meteors before the sky clouded over.

Humid and rainy weather greeted us next morning, but it was still comfortably warm. I donned my mask, snorkel and flippers and plunged into the sea. The water clarity was amazing. I could see for several meters in every direction. The gray rock floor of the cove was covered in red, maroon, green and rust-colored sea plants. Maroon snails clung to the rocks, and several different kinds of colorful fish fed off the plants and swam in the clear blue water. Some even allowed me to swim right into their midst. My one regret is that I didn't, and still don't, have a waterproof camera. A family of campers who arrived in the morning quickly set about diving for sazae snails. Three of them carried forked spears and tried their hand at spear fishing. The sazae snails were easy enough to find and pick up. They had a bulging bag of them after just minutes. If this is survival, it looks easy.

I wanted to stay all day but with the wind growing in strength, waves growing in height and my couch surfer, eager to catch a late afternoon highway bus to Sendai, we elected to catch the 12:07 bus so that we could get a ferry back to Iwafune by 2:30. It was too short a stay for my liking. There's so much more to see and appreciate on Awashima, but my time there did give me the taste of adventure I'd been craving for a long time. And I didn't have to go very far to get it. 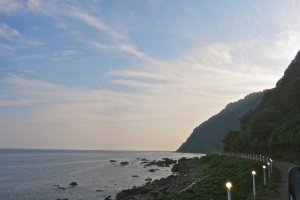 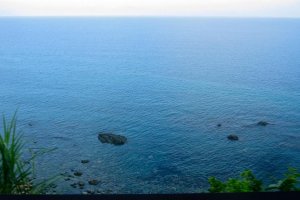 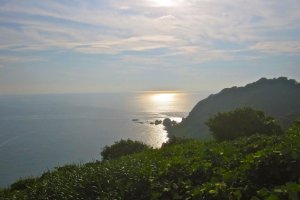 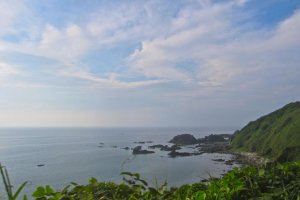 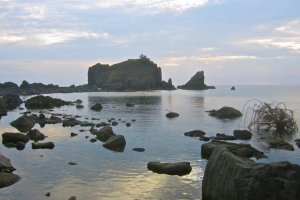