Tunneling through the rock in Oita Prefecture

Before the arrival of Zenkai the monk, the people of Yabakei town had a problem. One of their most revered temples - the mountaintop religious retreat of Rakanji - could only be reached by a precarious climb over rocky cliffs. The path was so dangerous that travelers regularly fell to their deaths.

Enter Zenkai, a former murderer who had found redemption in religious life. Seizing on the geographical situation as a way to atone for his past sins, the enterprising monk spent three decades tunneling through the rocky mountain to provide pilgrims to the shrine with a safer mode of passage. According to legend, he dug the entire tunnel with a hammer and a chisel.

Whether you believe the tale or not, the Ao no Domon tunnel is a rather remarkable feature in a landscape replete with fascinating rock formations. All 185 meters of the tunnel can be walked or driven, though drivers should note that some sections of the original tunnel are either underground or only accessible to pedestrians. Cuts in the rock allow visitors to see out to the Yamakuni river beyond.

At the beginning of the tunnel, there is a statue of Zenkai holding the tools he used to dig the tunnel. The real instruments are on display at Rakanji Temple in a small museum dedicated to the monk.

For more intrepid explorers, there are paths through the woods up onto the cliffs above the tunnel. It's possible that these intersected with the former trail to the Rakanji Temple as they are marked at certain intervals with old jizo statues and moss-covered way markers. The initial climb is quite steep and the path gets very slick after rainy weather. Mapboards at the base of the mountain provide several possible routes to take but hikers should at least take a cell phone picture for guidance as signage along the trail is sparse.

For drivers, there is a large parking area at the south end of the tunnel. Traffic can only move in one direction through the tunnel itself so vehicles will have to wait at either end at the traffic lights for opposing cars to transit through the tunnel. 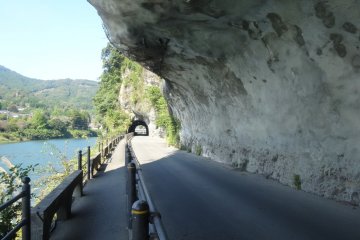 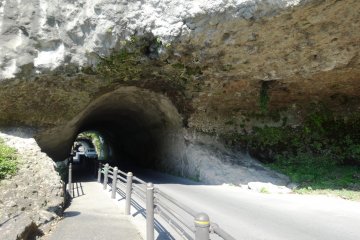 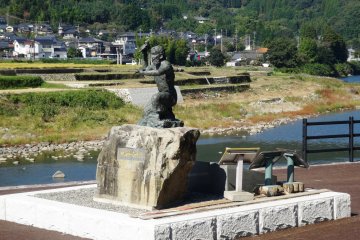