Kamoi Company originally made fly-traps, later progressing into industrial masking tape. It was a logical step after developing the infrastructure of paper and glue production. But how does a company go from fly-traps to designer masking tape?

According to an official at Kamoi, in 2006 they were contacted by a woman in Tokyo who wanted to get special masking tape produced for her scrapbook hobby. It was from this simple request that Kamoi developed a product that has become one of the hottest design success stories in Japan.

Each year they release a set of new designs that have expanded the concept of scrapbook making, allowing people to use their imaginations to cover greeting cards, photo album memory books and giftwrap presents. Truly, the number of uses for the tape is endless. I once visited a shop in the Bikan area of Kurashiki that had Kamoi masking tape for sale. At first I didn’t get it. I mean tape is tape right? But when I saw how people used it to express themselves I was blown away. One person in the shop artistically wrapped a small gift box using only different colors of tape. Then I realized that this is a kind of boutique art similar to origami.

I decided that I wanted to give it a try so I bought a set of three roles of tape; yellow, green and orange. I have used the tape in the spirit of the woman who first suggested the product. I use it to close envelopes, stick notes on the wall and of course for gift wrapping. Many people put the tape into patterns on top of whatever they want to decorate. No matter what you want to do, it looks better than cellophane tape especially on parcels and letters to friends and family. This product has been exhibited in store showcases in Europe and North America, where people have seen this very stylish and affordable product and have made it a must have in their households.

Many retail shops in and around Kurashiki sell the masking tape and the people who buy it continue to think of new ways to use this Kurashiki original. 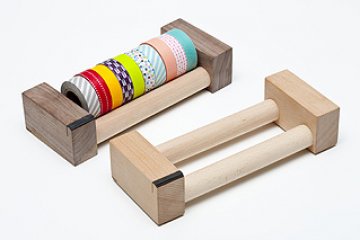 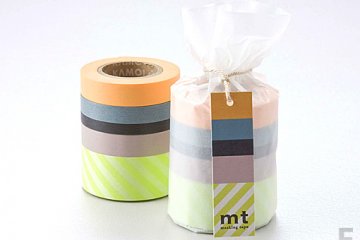 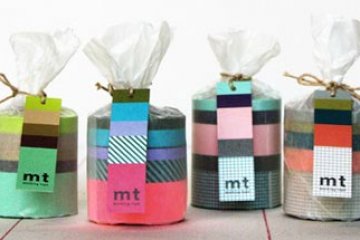