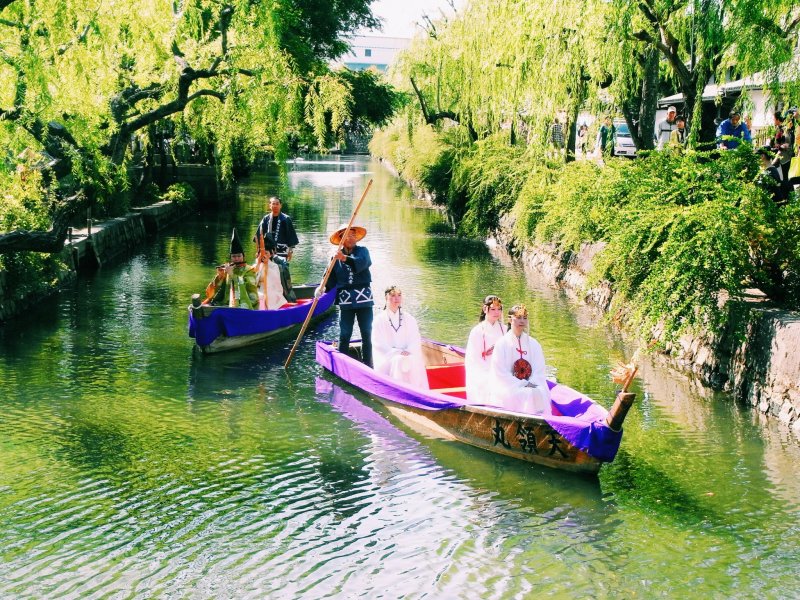 A day roaming amidst goddesses and demons

Mid Oct
The Sanjyojin being ferried over the canal to the ceremony area (Photo: Ellice Tan)
Venue : Achi Shrine When : Mid Oct 2021

The Kurashiki Autumn Festival or Achi-Jinja Aki Matsuri, happens every year on the 3rd weekend of October to celebrate abundant harvests. The Japanese name of the festival '阿智神社秋祭' is a combination of the shrine's name (Achi-Jinja), autumn (aki), and festival (matsuri).

The shrine is located in the Tsurugata-yama-koen, a park that overlooks the Bikan Historical Quarter, preserved from the Edo Period (1603-1867). This old merchant quarter on a normal day is already a very pleasant place to visit. The Kurashiki canal runs through the main area with white and black tiled warehouses found on both sides of the canal, giving this area a distinctive Japanese-European feel. Interestingly, Kurashiki takes its name from ‘Kura - 倉’ which means warehouse.

If you have not been to a festival in Japan before, I should explain that to aid the procession, the crowds may be cordoned off the parade area. But this particular festival in Kurashiki does it differently from Jidai Matsuri (Kyoto), as an example. The procession walks right into the heart of the old town amidst the crowd so all people can partake in it. People can choose to walk under the *Mikoshi (see additional information below) for good blessings, they can get knocked on the head by *Suinkyo for good health, and they may even meet an *Akuma or two prowling the streets.

I won’t go into the details of the full program but I would suggest that you hang around the ‘Kurashikikan’, formerly the Kurashiki town hall and now the Tourist Information Center, where you will likely get the best bits of the festival procession.

You can hear the procession before you see it coming as the bearers of the Mikoshi and the *Senzairaku will be chanting as they walk. The *Miko or priestess will travel on a horse and lead the procession. The *Sanjyojin or 3 goddesses will be carried over the water with court musicians playing *Gagaku in a separate boat slightly behind the goddesses. They will head down the canal before disembarking further down.

Once the priestess and the 3 goddesses are assembled on the stone bridge, the Miko makes a speech and then starts to sing. The beautiful voice is accompanied by the entrancing dance of the 3 goddesses and brings a calm over the whole area. Even with the crowd around, you do not feel flustered or annoyed as everyone seem to be charmed by the beauty of the scene. You can feel the gentle wind that whispers in your ear and the sunlight patting lightly on your cheeks, as you feel an overall sense of peace and calmness. After the song ends, the procession continues on but most people will have wandered off to have coffee or visit the many interesting shops around town.

Another event to highlight is that on this special occasion some of the residents open their houses to the public and display their Byobu (folding screens) which are handed down generation to generation. Some are accompanied with Ikebana (floral arrangements) as well as calligraphy works.

Many people attend festivals for its beauty, the grandeur, and to partake in the festivities but there is a long history of how things came to be. The following is just some additional information with the hope that it will help you enjoy the festival more when you do get a chance to attend.

Sanjojin 三女神
Munakata shrines are dedicated to the Munakata Sanjoshin 宗像三女神. Their worship began under the patronage of the Munakata 宗像 clan on Kyūshū (Kyushu) island, hence they are named the Three Goddesses of Munakata. The 3 Goddesses (Ichikishima-hime 市杵嶋姫, Tagitsu-hime 湍津姫, Tagori-hime 田心姫 ) are believed to be daughters of the Sun God Amaterasu. They are believed to be protectors of the nation, the imperial household, patrons of safe sea voyages and bountiful fishing.

Miko 巫女
Miko or priestess is the maiden of a shrine, trained to perform tasks in the shrine ranging from cleansing ceremonies to performing in ceremonial dances.

Gagaku 雅楽
Gagaku is the traditional music of the Japanese Imperial Court. It is believed that the music is used to communicate with the deities.

Mikoshi 神輿
A Mikoshi is a divine palanquin used to transport the deity during a festival or when moving from shrine to shrine. During a festival, people bear the mikoshi, on their shoulders and move it around the neighbourhood and wave it wildly from side to side to "amuse" the deity inside the Mikoshi.

Senzairaku 千歳楽
This particular floating stage carries the drum and its player. It is also known as Taiko-dai 太鼓台 and in the Okayama area it is called the Senzairaku. It is also shouldered by people and while moving the stage the people will chant a song. The origins of the name Senzairaku came from a Noh Song created in the Edo Period and due to its popularity, people started calling the drum stage itself 'Senzairaku'. This float serves to lead the parade and to entertain the deity.

Suinkyo 素隠居
Suinkyo are people dressed in traditional clothes and masks of elderly men and women. They are a humorous bunch as they go around hitting everyone on their heads with their red fans. It is said that the hitting on the head is supposed to make the person smarter and in turn bring about good health. There are a few versions on its origins but one of them is said to be a shortened form of 「素晴らしい隠居」which literally just means a ‘Grand Retirement’ which would relate to a rich long life.

Akuma 悪魔
Akuma is a devil or demon in Japanese.

- A short 10min train ride from JR Okayama Station to JR Kurashiki Station.
It is a straight, short and well signposted walk from Kurashiki train station.

However, I highly encourage a detour. Head towards Center-Gai Street (just on the left of the main street) There are plenty of old shops and restaurants. It is just a slightly longer route (longer also partly due to the distractions) but you’ll still end up in the Bikan Area.
- There is a old butcher shop that sells a mean katsu. I can still hear the crunch of that first bite.
- If you like old toys, there are a few shops here as well but prices are on a steep side.

My first trip to Japan coincided with SARS and that almost cancelled our trip but I was too stubborn to give up. Traveling on a budget with a friend, we went from Osaka to Hiroshima then up to Hokkaido before heading back up to Tokyo. I had the best time of my life. I was hooked. From then on,...