A hommage to the raised paw in Okayama

I once walked into a noodle shop in Kowloon, Hong Kong and was greeted by a curious ceramic cat with its paw raised. I had seen these in Japan and in almost every shop in Hong Kong and figured this was also a piece of Chinese culture. It took a visit to the Manekineko (beckoning or lucky cat) Museum of Art in Okayama City to correct my assumption.

This private museum is in the Kita ward of Okayama City and is tucked away in the hamlet of Kanayamaji. Getting to the general area is possible by bus but you have to get off and make the hike up the mountain. My little 660cc car’s engine was put to the test, and my ears popped as I made my way up the mountain. There was a good sized parking lot and I was shocked at the natural beauty of the entire area.

The museum’s curator is Mr. Mushiake, whose father came up with the idea for the museum in 1994. He told me with pride that the manekineko is a Japanese cultural creation. I was puzzled. Why was this object so popular around Asia? Perhaps it is because of the playful nature of the cat and belief that is good for business.

The museum has a temple-like feeling with over 700 cats on display. Some are large and wooden while others are small and ceramic. The colors and poses of each cat are as fascinating as the cats themselves. You can use your imagination to decide what they mean. The dominant interior feature of the museum is the bamboo poles that form the corridors. They are covered in paper with wishes written by visitors who can jot down their dreams in a serene salon that looks out on the village. The artwork that hangs on the walls was done by local school children who worked together to bring their spirit into the space.

The gift shop in the front of the museum contains unique creations, which include colorfully hand painted manekineko figurines, postcards and talismans. Prices range from 100 yen to 3500 yen. Take a manekineko home with you from a place that showcases a piece of uniquely Japanese culture. 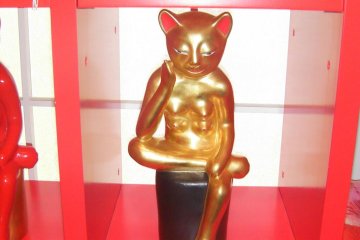 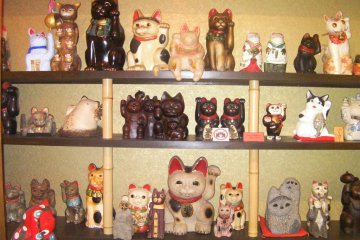 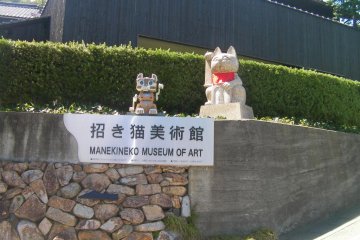