Nippon Olive is Japan's largest olive company and is located in the heart of Ushimado Town. Owned and operated as a family business, it has been in this area for over 300 years. Besides olive oil, they produce natural olive cosmetics, health supplements and mixtures of oil and other agricultural products grown in the area. You can purchase these products all around Japan but if you do decide to come to Ushimado, drive up to Nippon Olive's shop in their visitor's center from where Shikoku is visible on a clear day.

Running a family business might not appeal to some because of the high expectations and the feeling of being trapped by tradition. Still, Nippon Olive's president Kyoichiro Hattori took up the challenge to steer his family’s company into the future and take his place as a community leader.

Born and raised in Ushimado, Mr. Hattori attended Ushimado Junior High School. As Ushimado has no high school of its own all residents must go to high school outside the town. Mr. Hattori was no exception, attending the prestigious Sozan high school in Okayama City. This was his first taste of independence as he lived alone in Okayama City as a high school student away from his family. After graduating from Sozan, he attended Osaka University, where he graduated with a science degree.

Upon returning to Okayama he began to work for the family’s group of companies, spending several years managing the limestone mining business in Niimi City. Mr. Hattori later returned to Ushimado to assume the helm of Nippon Olive, a company that produces a line of olive based products from the largest olive grove in Japan and an additional grove located in Spain.

As I walked down the main road of Ushimado past Nippon Olive’s headquarters’ pink façade and reddish brown tiled roof I felt that I had been magically transported to the Mediterranean. I began to wonder about the origins of the Hattori family and their business so I tapped into Mr. Hattori’s knowledge. He told me that his earliest recorded ancestor in Ushimado arrived there from Osafune (now part of Setouchi City) in the late 18th century. He was a businessperson in what was then a bustling port compared to today. His ancestors dealt in various agricultural products including sake. During the pre-WWII era the Hattori family held rice fields in Korea which they lost after the war. Nippon Olive came out of the reconstruction period after the war.

While visiting Nippon Olive, Mr. Hattori treated me to a tour of the family home, a hop skip and a jump from the company. Along the way I noticed the name “Hattori” written on the mailboxes of all the houses we passed. “They are all relatives”, he explained. We reached the gate of house, which had a large courtyard and a rock garden. Inside, large tatami rooms went in every direction and a wide inner deck wrapped around the house. Mr. Hattori opened a smaller room which contained photos and paintings of his ancestors. “That’s my grandfather,” he said, referring to a black and white photo of a smiling man wearing glasses and a fedora. He had reason to smile as the family business was in good hands. 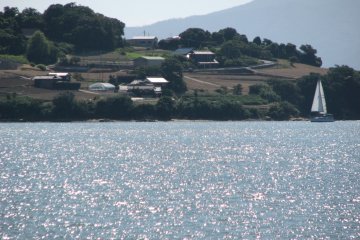 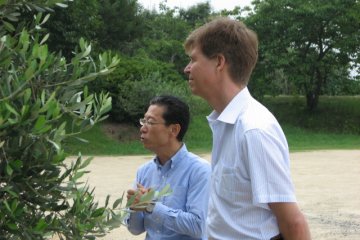 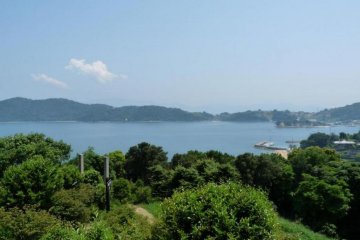