One of the best viewing points in Ushimado town

The Olive Garden in Ushimado is a sprawling estate that is owned and operated by Nippon Olive Company. The garden has over 10,000 olive trees that produce fruit that is used in Nippon Olive's range of products from food items to cosmetics. The Olive Garden in Ushimado is not the only one in Japan but it is the biggest single company owned facility.

The story of how the garden came to be is fascinating in itself. In the shadow of Japan’s defeat in WWII, Nippon Olive was born. It was a time of rebirth for all of Japan. In fact, there is an area of the garden called Roman Hill which perfectly illustrates this. During the war many neoclassical buildings were destroyed in the air raids in Japan by the allies. Neoclassical design was often used in banks and offices in Japan. Some of the rubble from the destruction wrought by the bombing was brought to the Olive Garden to form some sort of post-apocalyptic ruin on the top of a hill in Ushimado. It makes a point and serves a purpose. These fallen pillars arranged in the grass represent the recycling of hope for Japan’s future.

The Olive Garden hosts the Ushimado International villa and has a Hansel and Gretel type building that you have to love. The centerpiece of the garden would have to be the shop and tower that is easily visible from Ushimado’s main road. On the first floor there is a shop that sells olive related products such as soap and cosmetics. You can buy a live olive tree. The price depends on the size. Trees bearing fruit are the most expensive. The Olive Garden’s specialty is olive ice cream which you can eat from the look out point while peering out at the Seto Sea. Why olives in Japan? Well I’ve been told that the climate is similar to that of the Mediterranean so olives grow well in this region. After WWII there was a search for businesses that could help revitalize local economies. It was fate that the Mediterranean came to Japan. In a twist of irony perhaps in the future Japan will come to the Mediterranean. 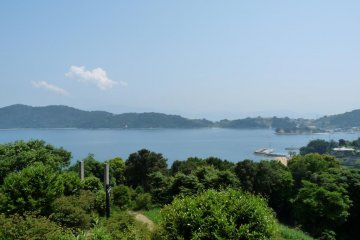 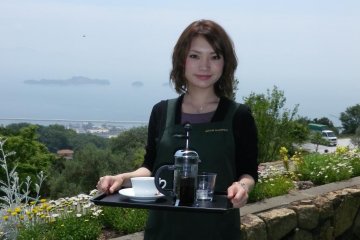 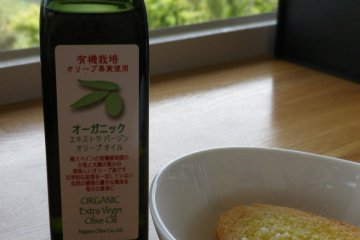 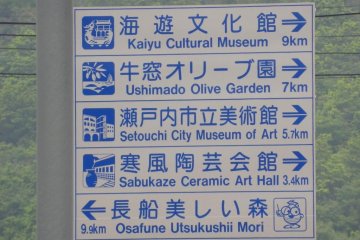