There are so many mountains in Japan that the best names are used more than once. While Tokyo’s Takaosan offers excellent views of Mt. Fuji, Okayama’s Takaosan is the natural protector of Shukumo Village in the Saidaiji area of Okayama City. The mountain is part of the Sannan chain that shadows Route 28.

You can get to Okayama’s Takaosan by taking the Ako line to Saidaiji from Okayama Station and transferring to the Ushimado bound bus that passes through the village of Kanzaki. Be careful about this because although there are two buses that go to Ushimado, only one of them passes through Kanzaki and travels along Route 28. The other bus takes an entirely different route through the town of Oku and will not bring you to Takaosan. After about a 20 minute bus ride you’ll be in the Shukumo area.  You can get off at Higashi Shukumo or the Shimo Achi stop. The next step is to walk to the adjacent road that runs parallel to Route 28. There are a few ways to the top but the easiest access is offered by a concrete road that runs up the side of the mountain.

Takaosan is alive. It has been for upwards of 10,000 years. I say this because both Jomon (early culture in Japan) and Yayoi (culture that came after Jomon) settlements have been found on the plateau of the mountain’s summit. People have been living here continuously since ancient times. These days, people farm the mountainside where plum and peach trees dominate. Houses are sprinkled along the mountain’s lower portion facing Route 28.

You can walk to the top in about an hour and a half. The last time I did it I actually drove half way up to the cemetery on one section of Takaosan were the ancestors of the villagers watch over their descendants. There are all kinds of statues that have origins in India and China here. Sanskrit is carved in blue on stone tablets. Heading up from a small temple above the cemetery you pass a narrow Buddha-lined path that leads to the caretaker’s house. The summit is a plateau with a look-out spot, a small playground, a picnic gazebo and a huge bell that can be heard for kilometers. There are hiking trails and a small temple on the mountaintop as well.

Local school children are taken for picnic-hikes up Takaosan. On your visit you might encounter lines of kids on their way to the top. Bring your water bottle and a towel and climb the heart of Shukumo, Okayama’s Takaosan. 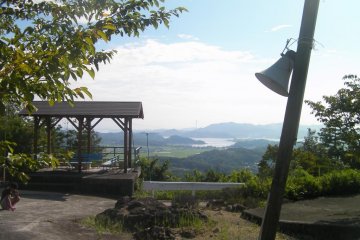 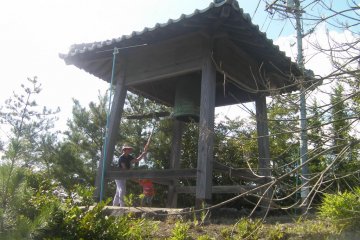 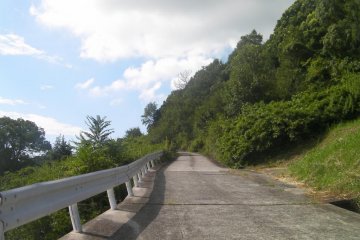 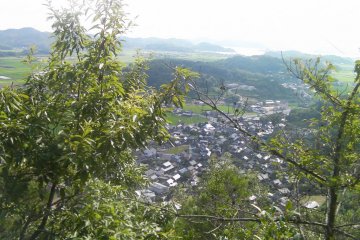 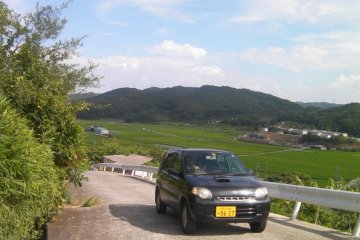 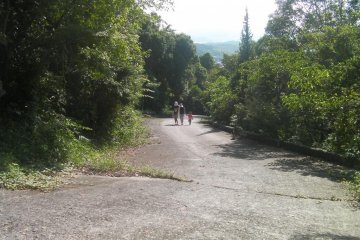 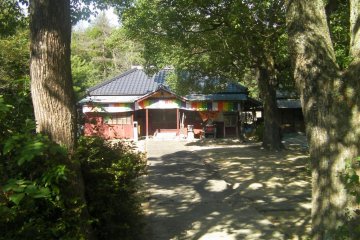 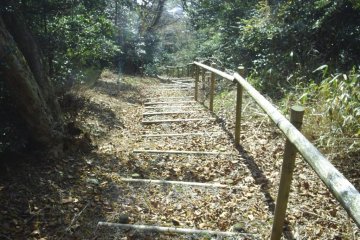