Perched high on a hill-top in present day Yomitan Village, romantic Zakimi Castle offers a commanding 360 degree view of central Okinawa, and a window into Okinawa’s past. Known as Zakimi-jo Gusuku to the natives, it is in ruins but the walls have been restored and the foundation of the castle manor inside is intact. The castle was built by Gosamaru in the 15th century, a local warrior and lord who helped unify Okinawa’s disparate nations into one Ryukyu Kingdom. The castle was designated as a World Heritage Site by the United Nations Educational, Scientific and Cultural Organization (UNESCO) in November 2000.

The castle is constructed primarily out of coral and stone. The exterior walls tower up to 10 meters high but look much higher due to the steep grade of the grounds it is built upon. A stone archway with coral steps on the south allows access into a lower court, which appears to be an add-on or afterthought as its walls are an outcrop from the walls of the upper court. The large grassy area inside the archway slopes upward and northerly to more steps and a second archway along the interior walls that is the entrance to the upper court.

The ground of the upper court slopes gently upward toward the foundation of the castle manor that would have given Gosamaru a clear and romantic view of the coastline and ocean. A recently emplaced stairway beyond the manor foundation allows visitors to scale atop Zakimi Castle’s exterior walls. The tops of the walls are surprisingly wide at nearly four meters is some areas. Access is allowed upon most of the fortress walls except for narrower and presumably more fragile walls that are marked as off limits in English and Japanese. There are no safety rails or ropes so visitors should keep a safe distance from the wall edges.

The spectacular views from Zakimi Castle’s walls are breathtaking and alone warrant a trip to gaze as its original owner once did. The North China Sea lies to the west. Cape Hedo is seen to the northeast. Northward across Cape Hedo the continuing coastline of Okinawa toward Onna Village is lined with a hilly forest and masquerades itself as a neighboring island. Northeasterly and easterly lies Nagaham Dam surrounded by farmland and topped by hills that prevent any view of the Pacific Ocean. Immediately to the south lies Yomitan; beyond to the south and southwest the cities and coastlines from Kadena Town to Naha can be seen on clear days.

The castle is a popular attraction for tourists and locals alike. It’s not unusual to hear Japanese, Chinese, Korean and English spoken during any one visit to Zakimi. Church groups congregate here for sunrise services. Lovers gather to watch the sunset and capture the enduring spirit of Zakimi in their own relationship.

The castle property contains not only the castle but a museum, trails and native structures as well. The trails along the winding tree-lined castle grounds lead to picnic tables, benches, native style structures, an open air gathering area, and picturesque viewpoints of the surrounding area. A Musuem of History and Folklore abuts the ample parking area at the entrance to the castle grounds. The castle is a 150 meter walk from the parking lot but the un-developed area around the castle is about one square kilometer, much of it covered in sloping jungle overgrowth leading toward the river by Nagaham Dam.

Entrance to Zakimi Castle and parking is free. The museum charges a modest 100 to 200 yen for admission. Bring comfortable shoes as a lot of walking awaits any visitors to this gusuku. Zakimi Castle is located on Route 12 just east of Route 58 in Yomitan and can easily be found by following the signs off of the main roads. The castle is always open. The museum is open 9 a.m. to 5 p.m. daily except Mondays, Japanese holidays, and Tuesdays if Monday is a Japanese holiday. 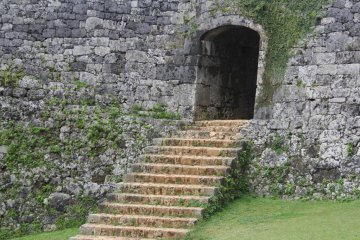 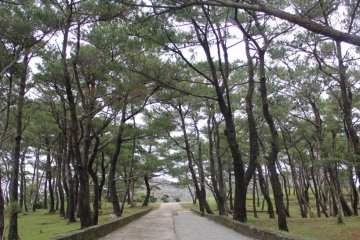 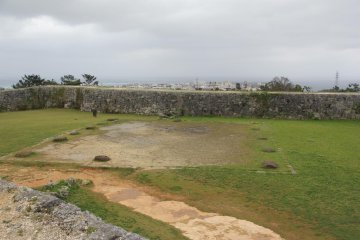 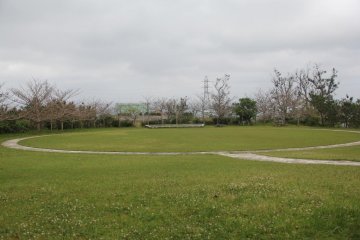