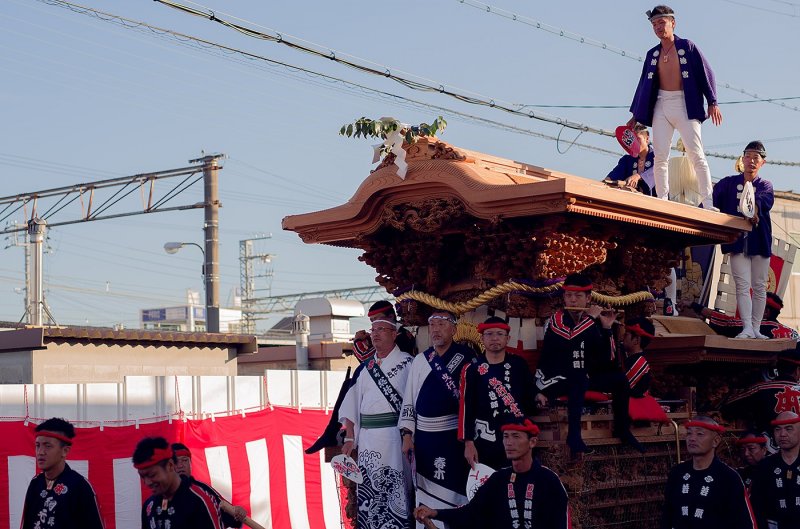 Rhythmic drumming pulses through the atmosphere, thick with anticipation. The airy melody of a flute wafts between the beats of the drum. The chants of cart-pullers drift across crowds of spectators, abuzz with excitement. They have gathered to witness one of the greatest spectacles in Japan - the Kishiwada Danjiri Matsuri.

As if religiously, they gather here every September to witness a festival celebrated as Japan's largest - if not greatest - danjiri matsuri (float festivals). Held across the weekend before 'Respect for the Aged' day, the Kishiwada Danjiri Matusi basks in 300 years of local tradition. During the festival, 35 neighborhood teams race their nearly 4-tonne danjiri through the streets of Kishiwada. Their energetic and high-spirited performance, is an impressive display of strength and endurance; each team is vying for glory - with the reputation of their neighborhood at stake.

Perched on the top of each float is the star of the show - the daikugata (carpenter). Dancing wildly on the danjiri roof, each daikugata employs their own style of performance. An admirable display of balance, the most famous move used by daikugata is 'Hikokinori', or 'Airplane' dance. The highly privileged and dangerous position of daikugata is reserved exclusively for local carpenters.

The festival was incepted 300 years ago by the lord of Kishiwada Castle. In prayer for an abundant harvest, the gates of the castle grounds were opened to the surrounding neighbourhoods. The festival has always received great popularity, of which is still felt today, with a large and excitable turnout each year.

If you're looking to get of the glimpse of the festival parade, head to Haruki Station off the Nankai Main Line. The festivities occur throughout the surrounding streets, and directly adjacent to the station. Being on the Nankai Line, it is easy to access the festivities directly from Kansai Airport.

One of the most popular vantage points for the festival is directly in front of Kispa La Park department store, just 5 minutes walk from Haruki Station. Crowds gather here in excitement to enjoy the festivities, and enjoy the local food and novelty souvenirs available from stalls set up in front of Kispa. You are also available to enjoy the excitement from inside Kispa, with a large screen displaying the event in the comfort that only air conditioning can offer. For an alternate view, you can also make your way to the third and fourth floors to view the proceedings from the Kispa La Park car parking area. Another great vantage point for the danjiri is Kishiwada's old town.

With the event's immense popularity, it is still possible to get an unobstructed view of the danjiri and the chanting float-pullers. If you follow the path directly opposite Kispa La Park, it is possible to explore the surrounding streets, which have reduced crowds and greater views.

If you would like to experience the excitement of the Kishiwada Danjiri Matsuri but won't be in Japan during the festival times, be sure to check out Kishiwada's Danjiri Museum. The museum displays high-quality footage and engaging displays related to the festival, as well as intricately carved danjiri replicas. There is also a second, less renowned, danjiri festival held in Kishiwada each October.

Additionally, you can also visit the place where is all began - Kishiwada Castle - which is just two stops from Haruki on the Nankai Main Line. The Kishiwada traditional town is also nearby. So whether you want to enjoy the quiet reflection of an Edo Japan or revel in festivities, Kishiwada has something to offer everyone.