The four halls of Sumiyoshi Taisha (Photo: By Saigen Jiro - Own work, CC0,)

The First Shrine of Osaka

Sumiyoshi Taisha is one of the largest, oldest and most prestigious Shinto shrines in Osaka Prefecture. For several centuries, it was the Ichinomiya or First Shrine of what was then Settsu Province. Whenever significant events happened in Japan, the Emperor would despatch messengers to inform the Kami of all the Ichinomiya.

Following the Meiji Restoration in 1876, a new ranking system for shrines called the kansha was introduced and under this, Sumiyoshi Taisha was designated as a kanpei taisha or Great Imperial Shrine.

The Kojiki, the oldest written record of Japan, states that the shrine was founded in the 3rd century after an oracle was given to Empress Jingu on her return from conquering Silla (Korea). It is said that the Sun Goddess, Amaterasu, guided her in establishing the shrine.

Empress Jingu is believed to have ruled Japan from 201 to 269 although there is little physical evidence of her existence and she is considered to be somewhat of a myth. She is also not considered part of the official succession order of Japanese Emperors, having only been a caretaker of the country following the death of her husband, Emperor Chuai. In 2011, Sumiyoshi Taisha celebrated the 1800th anniversary of its establishment, placing its founding in the year 211.

The shrine was built to enshrine the guardian gods of seafarers and sailors. While sea travel between the Korean Peninsular and China was common, it was also treacherous. Envoys and diplomats to Tang Dynasty China and the Kingdom of Silla would first travel to Sumiyoshi Taisha to offer prayers for a safe and successful journey. The four gods of Sumiyoshi are:

It may seem odd that a shrine venerating sea gods be built so far inland, but for much of its history, Sumiyoshi Taisha was in fact very near the coast. Japan's oldest international port, Suminoe-no-Tsu, was only a short distance to the south and was where diplomatic missions to China and Korea would begin their journey.

The main entrance to the shrine is marked with a huge torii called the Nishi-ootorii or west grand shrine gate. Passing under the torii and walking up the promenade brings you to one of the most recognizable symbols of Sumiyoshi Taisha. The famous Sori-bashi is a beautiful bright red, wooden bridge that spans the kami-ike divine pond. This arched bridge has very steep sides formed into narrow steps.

Crossing the bridge is made deliberately difficult as this act is part of the ritual of purification before entering the shrine proper. On the opposite side of the bridge is the water basin for purifying ones hands. The approach to the main shrine precinct, otherwise known as Unohi-sando consists of a set of stone steps that lead up and under another torii before passing through a colourful wooden gate.

The main precinct is a large square containing the four halls, laid out in a unique pattern. The first, second and third wings, housing the Sumiyoshi-no-Okami are set in a row facing east-west with the larger first wing at the back. The fourth wing housing Empress Jingu sits to the right of the third wing. These buildings are constructed in a special style known as Sumiyoshi-zukuri characterized by the shape of the buildings, the position of the entrance and the unique colour combination of black, white and red.

The thatched roofs of the buildings are also quite special. The ends of the roof gables are marked with two decorative poles called chigi that look a little like a pair of crossed swords. In between these gable ends are three large blocks of wood designed to help hold the thatched roof in place. These “katsuogi” are said to resemble dried bonito fish. Most shrines have these in place but they are normally cylindrical whereas those at Sumiyoshi Taisha are rectangular.

Several other buildings surround the square including a prayer hall, dance hall, purification hall and library. The walls of the square are also built to include market stalls. During festivals, these stalls will be staffed with shrine maidens from whom you can buy fortunes, omamori good luck charms and ema prayer tablets.

Leaving the square by the back gates takes you along a path passed numerous setsumatsusha, small auxiliary shrines. A few of these additional shrines are built around very old, large trees. These ancient sentinels are said to be the home of tree spirits called kodama.

One slightly more unusual part of the grounds is the Goshogozen. This is a small, raised altar surrounded by a stone wall made of numerous small pillars. Piled between the wall and the altar are thousands of tiny white or grey rounded stones. People reach through the gaps in the wall and rummage through the stones to try and find ones with markings on. Some stones have 'dai' (大), 'go' (五), or 'ryoku' (力) written on them and bring good luck when you find the full set.

As one of the most important shrines in Osaka, Sumiyoshi Taisha is the focal point for some of the oldest and most spectacular festivals in the prefecture. One of its most famous is the Otaue (rice planting) festival on 14 June.

As the sacred rice seedlings are planted, performers in a myriad of traditional costumes; from Heian Period maidens to samurai, carry out various dances and rituals to pray for a bountiful harvest.

The largest festival of the year though is the Sumiyoshi Matsuri which takes place from 30 July to 1 August. It begins with the ceremonial washing of the Mikoshi, or portable shrine, into which the kami of Sumiyoshi Taisha are transferred. Then, a parade of over 1,000 people will carry the Mikoshi to Shukuin Tonguin the city of Sakai.

Throughout the year, Sumiyoshi Taisha is also a perfect place to get a glimpse of traditional Shinto weddings. At peak times, such as cherry blossom season, they might hold as many as eight in one day. In fact, my own wedding took place here.

It starts with a gathering of the families in the Wedding Hall before a taiko drum sounds to announce the beginning of your procession. The priest then leads the procession through the shrine precinct to the temizu-sha (hand washing basin) where shrine maidens purify the couple's hands.

From there, you are led further into the grounds to the Dainichi Hongu in which the wedding ceremony takes place. Here the couple must place scared Sakaki branches on the shrine altar and take part in a sake drinking ritual and the groom must also make an address to the Kami of Sumiyoshi Taisha.

This Grand Shrine is busy all year round but never more so than during new year. Every available patch of ground along the paths and promenades holds some kind of market stall. From these you can buy the usual array of street foods as well as toys and games for the kids. Millions of people descend on the shrine for hatsumode, the first shrine visit of the year to replace their omamori and to make offerings at the four main halls.

Sumiyoshi Taisha is an interesting shrine well worth visiting for those looking to get away from the busier sights of central Osaka. On the opposite side of Sumiyoshi Station is Sumiyoshikoen a small but attractive park popular during cherry blossom season. The Chin Chin Densha tram line is also a convenient way to reach the historic city of Sakai just to the south.

Sumiyoshi taisha is located in Sumiyoshi Ward of Osaka. It is easily reached by taking the Nankai Main Line from Nankai Namba Station to Sumiyoshi Station. You must make sure to be on a local train as only these stop at Sumiyoshi station.

There are also two tramways that you can take which pass by Sumiyoshi taisha. The Hankai LIne which runs from Ebisucho Station to Abikomichi Station and the Uemachi Line which passes by Tennoji Station and runs all the way to Sakai. Both stop at Sumiyoshi Station which is right in front of the shrine. 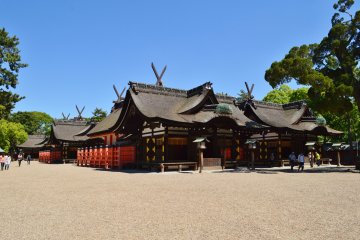 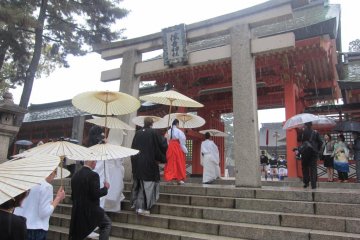 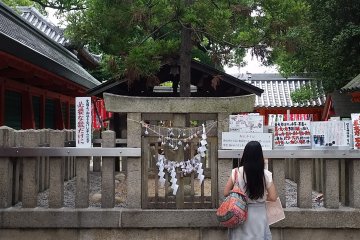 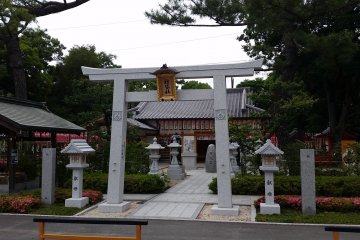 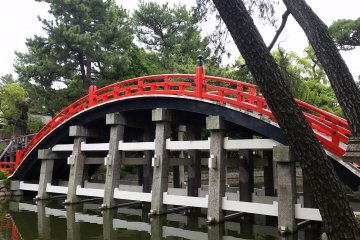 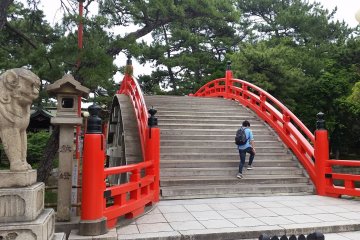 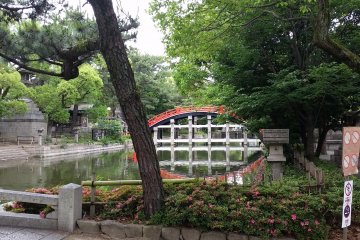 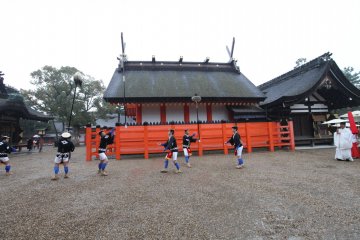 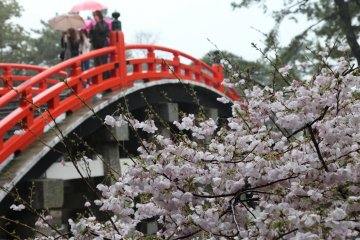 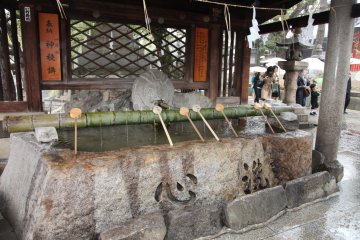 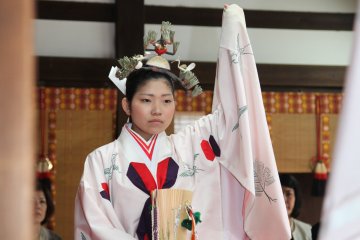 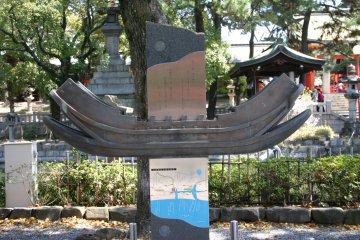 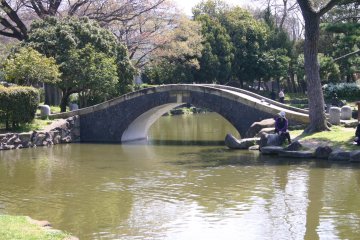 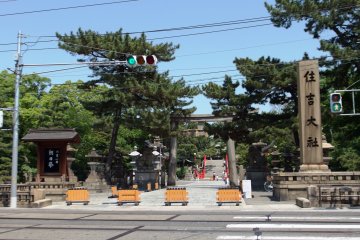