In one of the liveliest areas of Osaka, Dotonburi (道頓堀, pronounced Dotombori), lays the Tombori River Cruise. A 20-minute cruise along Dotonburi River is a great way to experience the neon city lights from a different angle particularly during the Christmas season. Not only are holiday decorations strung across the bridges, the animated cruise guide even dresses up as Santa Claus! Even though the tour is spoken only in Japanese by a Rakugo comedian, if you pay close attention you might just understand and laugh along. At 700 yen per adult ticket, it’s one of the popular touristy things to do when you’re in Osaka. Not just during the Christmas season, but all throughout the year.

You’ll start by lining up at the Tazaemonbashi Bridge Boat Dock, a 5-minute walk from Namba Station. With seating capacity of about 20 passengers, be sure to bundle up for chilly nights. Once comfortable you’ll want to have your camera ready to capture the fun electronic displays and mechanical ones, too. Photo tip: apply a low light exposure and action setting for best coverage at night along the canal (Ugh! I didn’t realize this myself until I reviewed my pictures after the cruise was finished).

The highlight of the course was when the boat paused beneath the Ebisubashi Bridge where the Glico man billboard shines bright above. Glico is one of Japan’s largest food distributors and is popularly known for its Pocky (crunchy petite biscuit sticks covered in frosting such as chocolate or strawberry). A landmark since 1935, locals & tourists alike so often use it as a meeting spot while enjoying a takoyaki (octopus dumplings) appetizer. Across from Glico is the Asahi beer billboard. Watch closely because the colors change from solid white to yellow as the mug is topped off with “Super Dry” formula.

According to the brochure, boats depart every half hour. Infants & children are allowed; 300 yen for Elementary students. Rest your feet, wrap your arm around your sweetheart(s) and enjoy the cruise. With nine bridges, a panoramic view of Osaka Minami and the comedy of the tour guide, you’ll experience some of the best views of Downtown Osaka on the Tombori River Cruise. 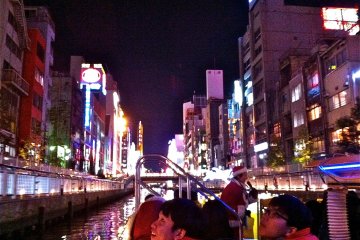 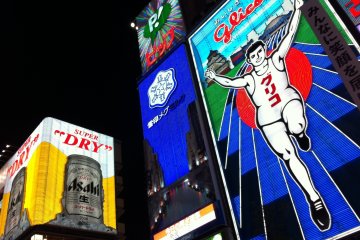 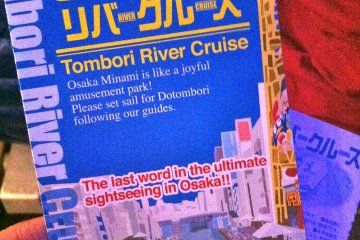 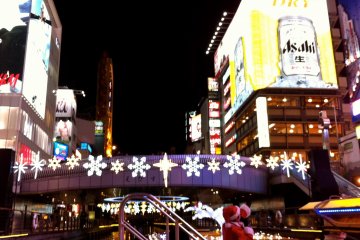 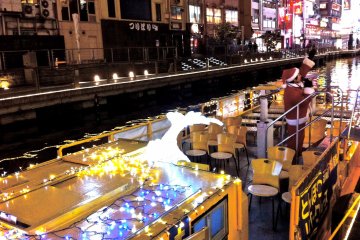 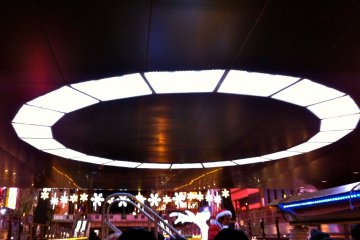 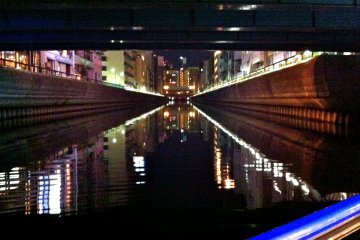 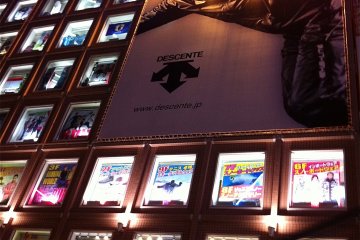 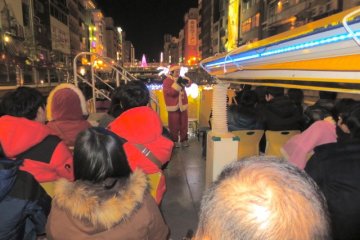 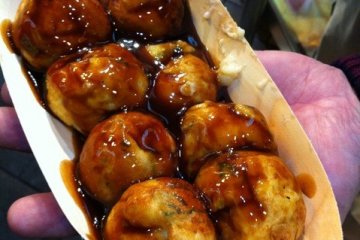 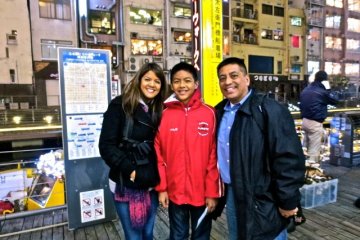