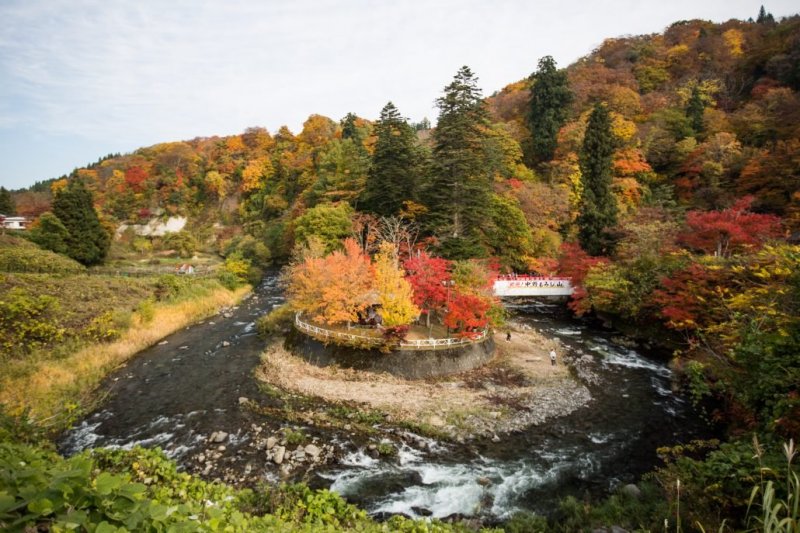 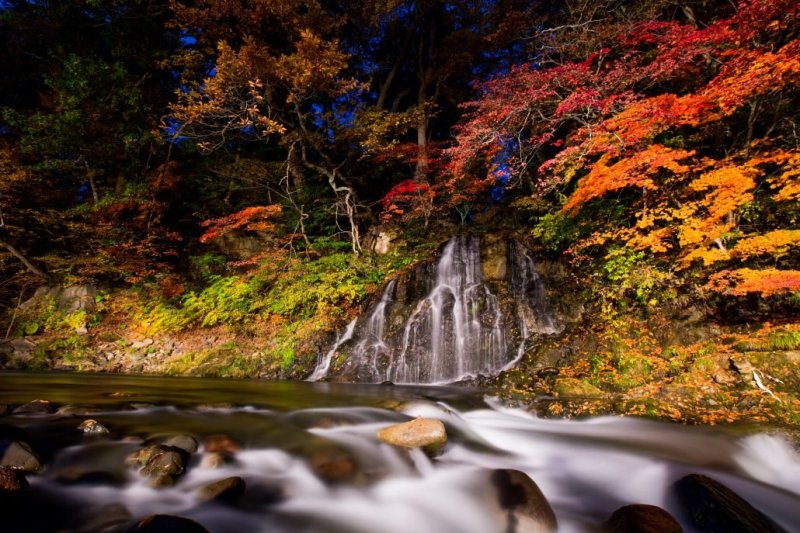 Nakano Momiji-yama in Aomori Prefecture is famous for its stunning autumn foliage. From mid-October to early November every year the hills are painted with the vibrant colored leaves.

The mountain foliage began during the Edo period when more than 100 maple trees were transplanted from Kyoto’s most famous sites. Since then, Nakano—outside of Kuroishi—has become a favorite spot for many momiji or autumn-leaf viewers.

Also, on site is a rushing white waterfall, which makes for a stark contrast against the reds and golds of the leaves. At night, during momiji season, the leaves are illuminated giving them an entirely different appearance and feeling compared to during the daytime.

The leaves, vermilion bridge, and waterfall have led to Nakano Momiji-yama being called Little Arashiyama after Kyoto’s own Arashiyama.

While you’re visiting the mountain, be sure to drop by Nakano Shrine. This shrine is home to several ancient trees, including 200-year old Japanese maples, a 600-year old great cedar, and 200-year old fir trees.

Enjoy the natural monuments of Kuroishi City and hike the 2-km trail around the site. Or, if dining is your pleasure, have lunch at the Koyo-Doko Platform where you can gaze at the leaves and waterfall while eating.

A serene waterfall punctuates the foliage of the Nakano Momiji-yama and provides stunning photos.

Cross this vermilion bridge and get some photogenic vistas of the foliage.

About 25 minutes by Konan bus from Kuroishi Station.

A remote ryokan in Aomori prefecture will bring you back into the past. No electricity and no wifi; and only old oil lamps to light up all the place.