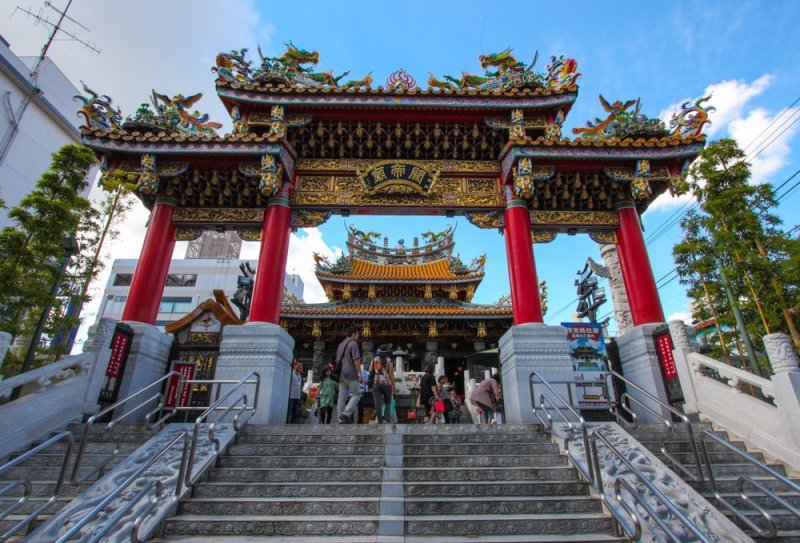 Kanteibyo Temple (関帝廟) is a spiritual landmark in Yokohama’s Chinatown. It shines like a beacon of faith with its vibrant red exterior and intricate detailing. Dragon statues stand above the entrance with poised bodies and open mouths, fiercely guarding the temple. The interior is decorated ornately with gold designs, wordlessly speaking of the temple’s significance. In the center sits a statue of Guan Yu, a famous military general turned deity who is immortalized in the historical Chinese novel, Romance of the Three Kingdoms. Worshippers pray to Guan Yu for business and financial prosperity.

Founded in 1862, Kanteibyo was allegedly created when a Chinese migrant brought a statue of Guan Yu to Japan. The temple started humbly as a small shrine but expanded over the years thanks to donations from devout worshippers.

Kanteibyo’s history was a turbulent one, as it stood witness to numerous calamities. In 1923, the temple was destroyed by an earthquake; years later it was damaged in 1945 during World War II air raids; and in 1986, it burned down due to an unsolved fire incident. After each destructive event, the town united to rebuild the temple, reflecting the residents’ deep sense of community and connection with each other and the temple.

Kanteibyo has become entrenched in Chinatown’s legacy and is a frequented site by residents and tourists alike for prayer and admiration. The temple is dedicated to seven deities, all of which--except the Jade Emperor who is symbolized by the ceiling--are represented by lavishly adorned statues. These deities include the Jade Emperor, Guan Yu, Di Mu Niang Niang, Zhou Cang, Guan Ping, Guan Yin, and Fu De Zheng Shen. Centered in the temple is Guan Yu’s statue, which is red-faced, long bearded, and cloaked in brightly-colored attire.

The most common way of praying involves the use of incense sticks. While fire is prohibited in the main shrine, worshippers can light the incense sticks outside and place them in five burners corresponding to the shrine’s deities. After lighting the incense, practicers enter the main building and pray to the deities in a specific order. Temple assistants can also help people tell their fortunes with the use of divination moon blocks.

The temple holds celebratory events throughout the year with the most popular ones being on New Year, Lunar New Year, and Guan Yu’s birthday. These spectacles are filled with traditional Chinese performances such as lion and dragon dances.

Kantei-Byo Shrine in Yokohama Chinatown is swarming with decorative dragons.

Kantei-byo (関帝廟) is a Chinese shrine dedicated to “Kanwu” who  is a famous general in the well-known Chinese historical novel, “The Romance of Three Kingdoms.”

Details of Kanteibyo in Chinatown 1

Yokohama Chinatown-Calm in the midst of cheerful chaos: Kanteibyo Temple (Mausoleum) is the most important spiritual, cultural, and social site for overseas Chinese in Yokohama.

Details of Kanteibyo in Chinatown 2

The Shin-Yokohama Ramen Museum combines museum with foodcourt with ramen to create an educational and filling event. The museum opened in 1994 and is dedicated to all things ramen. From the processing of noodles to the variations of broth soup. There is much to learn in the museum’s small, yet full, gallery. With broth soup taste samples daily on the first floor, guests can taste for themselves the differences between three types of broth. The interior of the ramen museum is also notable for resembling 1958 Japan, the year that instant noodles were invented in Japan. These basement floors are the real attraction for many visitors and especially foodies. By purchasing a ramen ticket at a machine in the center of the indoor courtyard (separate from the cost of entry), you’ll be able to enjoy a steaming hot bowl of one of the country’s famous ramens. Choose from eight different types of ramen to satisfy your noodle needs. Flavors of ramen also come in half sizes so that you can fill yourself up on as many varieties of ramen as you like.

Aoba is a casual and friendly restaurant situated on a convenient side street in Yokohama Chinatown. The food they serve is really delicious and healthy.

Masobyo Temple (媽祖廟), also called Ma Zhu Miao, is located in Yokohama’s Chinatown. The young Taoist temple, which opened relatively recently in 2006, enshrines Mazu, the Chinese Goddess of the Sea. Despite its young age, the temple exudes ancient spirituality older than its years. The structure has a geometrical base and is decorated with blue, green, red, and gold detailing. A massive gate welcomes visitors and worshippers alike and is connected to the main temple with a line of red lanterns. Inside Masobyo, a statue of Mazu is cloaked in vibrant attire and wearing an imperial headdress, symbolizing her godly status. The interior is equally as impressive as the outside with exquisite designs covering every surface. Worshippers commonly go to the temple to pray for safe travels since, historically, sailors and fishermen would pray to the goddess for calm seas during their journeys. History of Mazu: Goddess of the Sea As a human, Mazu was born in the tenth century and named Lin Mo. According to legend, she was gifted with supernatural abilities, such as predicting the weather, calming storms, and experiencing visions. She dedicated her life to the teachings of Tao and ascended to the heavens at age 28 as a goddess. Mazu has two demon bodyguards, Qianliyan and Shunfenger. Both demons vowed to protect Mazu after failing to defeat her in combat for her hand in marriage. Inside Masobyo, statues of the demon guardians stand to the left and right of Mazu. One, colored red, is positioned in a listening pose with his hand to his ear, while the green colored one is diligently watching, with eyes that seem to scan the temple. Today Worshippers visit Masobyo to pray to Mazu for safe travels, as well as general health and safety. The temple is also a popular spot for tourists due to its traditional architecture and cultural significance in Chinatown. Of course, Mazu’s affinity for keeping travellers safe is appealing to tourists as well. Masobyo’s temple staff are extremely helpful and more than willing to teach visitors the appropriate methods of worship. Individuals who want a closer look at Mazu’s statue are required to buy incense sticks, which they place in five burners. After lighting the incense sticks, they should bow in respect. During New Years, the temple becomes crowded with people participating and watching the festive displays.

Yamashita Park (山下公園) is a public park along YokoThe Yamashita Park is considered the first coastal park in Japan and is located directly in front of the port of Yokohama. It extends almost 700 meters from the east side of Osanbashi to the Yamashita Pier. It was founded in 1930 by filling the area with the debris of the great Kanto earthquake opened. The park includes a meadow of grass, a rose garden, the "Little Girl in Red Shoes" statue, the "Guardian of the Water" statue, which is a gift from San Diego, a sister city of Yokohama, and the memorial to that Song "" Kamome no Suihei-san (Seagull Sailor) "", a water staircase and a stage. The former cargo and passenger ship Hikawamaru is anchored here.hama's waterfront. The park was built using landfill from the remains of buildings destroyed in the Great Kanto Earthquake of 1923.

Yokohama Park is the second oldest park in Yokohama after Yamate Park and was opened to the public in 1897. With the construction of Yokohama Stadium, the dilapidated facilities of the park were renovated and a Japanese garden-style pond and creek, a fountain and a river were renovated Multipurpose space expanded. Around 140,000 tulips of around 70 varieties will be planted in Yokohama Park in November. The flowering time varies depending on the variety, but depending on the weather, the tulips are usually in full bloom from the beginning to the end of April. The park is a particularly popular travel destination at this time.