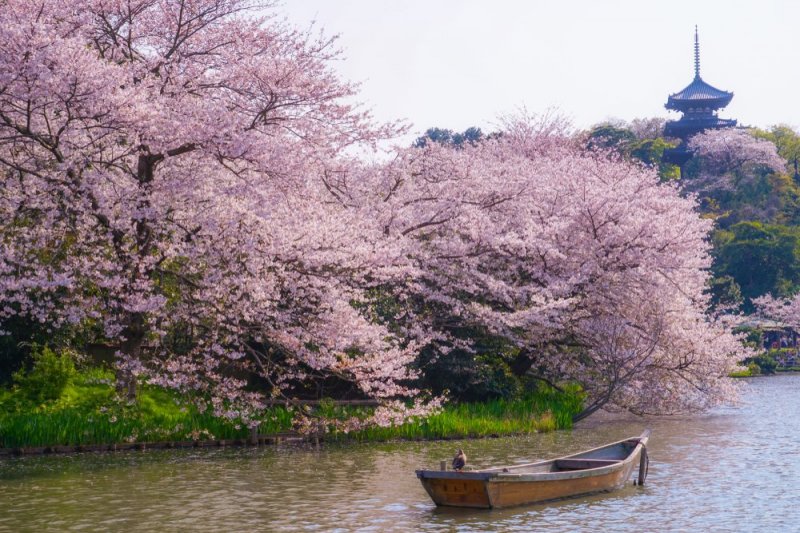 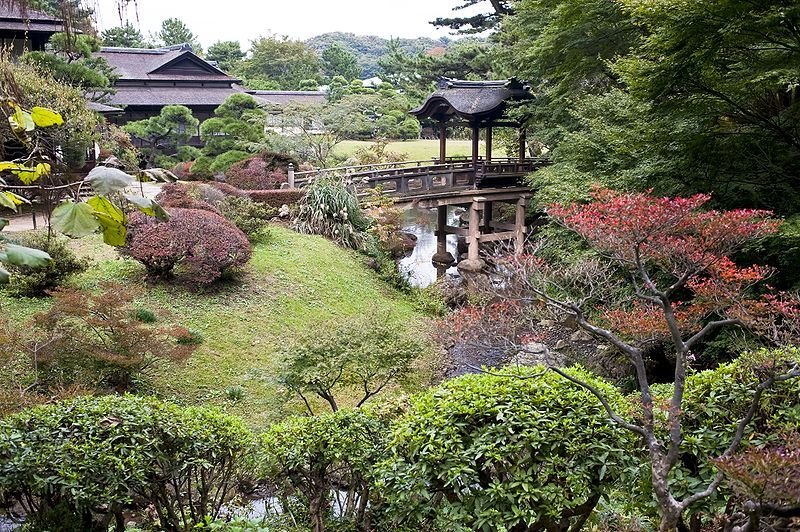 In 1859, when the port of Yokohama opened to foreign trade, silk was the country's largest export. In 1909, Japan was the world's premier silk supplier, serving markets such as the United States and Europe.

Sankeien was built by Hara Sankei, a great entrepreneur who produced and traded silk in Yokohama. In the early 1900s, he used some of his wealth to create a Japanese garden over the course of about 20 years.

The Sankeien covers approximately 175,000 square meters and extends over three valleys along the coast. It consists of an outer garden that has been open to the public since 1906 and an inner garden that was originally kept private for Sankei's personal use. Seventeen historic structures that have been relocated from Kyoto, Kamakura and other locations have been brought into harmony with nature over the four seasons to present great landscapes.

Sankeien Garden is a place of beauty and history in Yokohama.

Sankei-en Garden in summer gives us three fun attractions: a wonderful breeze blowing through fresh green, an elegant lotus pond, and a great chorus of cicadas.

Sankei-en Garden is generally recognized as one of Japan's most beautiful. Covered this day by a soft white blanket of snow, it truly was a winter wonderland!

Lotus flowers at Sankeien Garden in Yokohama dance wildly in a sea breeze from Yokohama Bay.

Sankeien Garden, one of the most beautiful Japanese gardens in Honmoku, Yokohama

A Stroll Through Sankei-En Garden

Sankei-En Garden is a great place to bring special guests, who are always impressed by this very quiet, serene, setting of Japanese beauty.

Visit the beautiful lotus ponds at Yokohama's Sankei-en Garden in mid-summer. Early mornings are best when all is serene and peaceful.

Sankeien Garden: Join me as I discover traditional Japanese culture in modern Yokohama

Sankeien Garden is comprised of an inner and outer garden with scenery that changes every season. In Autumn, the Chrysanthemum Flower Exhibit is on display. Not only is it the Imperial Seal of Japan, it is the flower of November that represents longevity & rejuvenation. Admission to the garden is 500yen for Adults, 200yen for Children. Parking up to 2-hours is available for 500yen.

Rinka-en, situated just outside the famous, lovely Sankei-en Gardens in Yokohama's Honmoku district is lovely in its own right. Housed in a 600-year-old home that was moved

Shabu Shabu is one of those "must try" foods to add to your list when you visit Japan. Dip pieces of thinly sliced beef into boiling water and then dip into sauce-Sublime

Moon Café in Yokohama is an American diner; one of three in the world. Visit Moon Automotive & Mooneyes Area-1 for fun American accessories for your car or wardrobe.

Known in Japanese as ‘Negishi Shinrin Koen’, this is one of the largest parks in Yokohama with a surface area covering over 1800 square meters. Originally built as a racing track in 1867, it was home to the first western style horse racing in Japan. However, after the Second World War it was redeveloped into a golf course by occupation forces. Its fortunes were changed once again in 1977 when it was officially opened by Yokohama city as Negishi Forest Park.

Masobyo Temple (媽祖廟), also called Ma Zhu Miao, is located in Yokohama’s Chinatown. The young Taoist temple, which opened relatively recently in 2006, enshrines Mazu, the Chinese Goddess of the Sea. Despite its young age, the temple exudes ancient spirituality older than its years. The structure has a geometrical base and is decorated with blue, green, red, and gold detailing. A massive gate welcomes visitors and worshippers alike and is connected to the main temple with a line of red lanterns. Inside Masobyo, a statue of Mazu is cloaked in vibrant attire and wearing an imperial headdress, symbolizing her godly status. The interior is equally as impressive as the outside with exquisite designs covering every surface. Worshippers commonly go to the temple to pray for safe travels since, historically, sailors and fishermen would pray to the goddess for calm seas during their journeys. History of Mazu: Goddess of the Sea As a human, Mazu was born in the tenth century and named Lin Mo. According to legend, she was gifted with supernatural abilities, such as predicting the weather, calming storms, and experiencing visions. She dedicated her life to the teachings of Tao and ascended to the heavens at age 28 as a goddess. Mazu has two demon bodyguards, Qianliyan and Shunfenger. Both demons vowed to protect Mazu after failing to defeat her in combat for her hand in marriage. Inside Masobyo, statues of the demon guardians stand to the left and right of Mazu. One, colored red, is positioned in a listening pose with his hand to his ear, while the green colored one is diligently watching, with eyes that seem to scan the temple. Today Worshippers visit Masobyo to pray to Mazu for safe travels, as well as general health and safety. The temple is also a popular spot for tourists due to its traditional architecture and cultural significance in Chinatown. Of course, Mazu’s affinity for keeping travellers safe is appealing to tourists as well. Masobyo’s temple staff are extremely helpful and more than willing to teach visitors the appropriate methods of worship. Individuals who want a closer look at Mazu’s statue are required to buy incense sticks, which they place in five burners. After lighting the incense sticks, they should bow in respect. During New Years, the temple becomes crowded with people participating and watching the festive displays.

Yokohama Chinatown, also known as Yokohama Chukagai, is Japan’s largest Chinatown. An enclave of Chinese shops and restaurants has stood in this section of Yokohama since the port city was opened to international trade in 1859. The entrance to Chinatown is marked by four intricate and colorful gates, which represent the four directions in Chinese tradition. Each gate is associated with a different mythological animal an additional five gates stand within the neighborhood’s boundaries. More impressive architecture can be found at the Kanteibyo temple (also known as the Guan Gong Temple), which is dedicated to the Chinese god of successful business and prosperity. Built in 1873 by the neighborhood’s residents, it remains popular among the faithful and also welcomes visitors with its serene evening lantern displays. Nearby Masobyo Temple is newer and smaller, but this Taoist temple still impresses with its decorative touches. Chinatown is noted for its cuisine, from humble street stalls to gourmet feasts. Pork or mustard green steamed buns, egg tarts and goma-dango (sesame seed dumplings) all make for popular pick-me-up streets to grab on the go. In the many eateries that line the neighborhood streets, it’s possible to dine on any number of authentic Chinese dishes – spicy mapo tofu, duck, and dozens of dim sum options are just a few of the popular menu items on offer. Several stores in the area offer a unique shopping experience not often found in other Japanese cities. Pick out the perfect good luck charm or try your luck at a fortune teller. Browse the selection of one-of-a-kind “qipao”, a type of traditional Chinese dress. Or, stock your cabinet with a range of Chinese teas. Yokohama Chukagai sees its greatest influx of visitors every winter during the fifteen-day-long Chinese New Year festivities. The neighborhood is justifiably famous for its lavish celebrations, with lion dances, parades and numerous other activities. The streets are often decked out in lanterns and paper dragons; night visits are extremely atmospheric during this season.