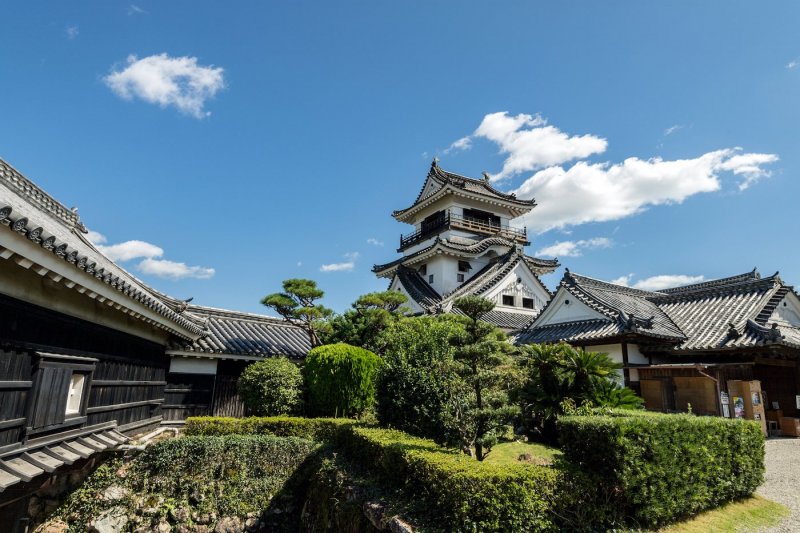 Kochi Castle in Kochi Prefecture, Japan, was built following the Battle of Sekigahara in 1600. Construction of the castle took place from 1601 to 1611 and remained intact until a fire burned down much of the original fortress in 1727. The castle went through two major reconstruction periods; the first from 1729 to 1753 and the second from 1948 to 1959.

While no battles of importance took place at Kochi Castle, it is noteworthy for its original structures. Kochi Castle is the only castle in Japan to retain the original tenshu and palace and have all the original buildings of the honmaru. Today it remains an Important Cultural Asset.

In pop culture, the castle has been featured in the animated film Ocean Waves by Studio Ghibli. It was also portrayed in the film The Harimaya Bridge where several scenes took place in the courtyard.

When visiting the castle today, guests are asked to remove their footwear and don slippers. The old tatami rooms are not accessible due to their age and wear but they are visible. Visitors can also view many Tosa artifacts and even climb stairs to the upper rooms of the tower where there is a wonderful view of the castle surroundings. Handicap access is severely limited due to the number of stairs and the lack of an elevator.

Kochi Castle is in downtown Kochi on Otakasa Hill, and offers a great place for a lookout over the city. You can also enjoy a picnic at the park or looking at cherry blossoms in the spring.

Stay at this upscale hotel in close proximity to Kochi Castle, where you can enjoy a hot spring bath and learn a few things about local history.

Visit Kochi Prefecture’s best-known place to eat. Locals and visitors alike love this shopping area with over 60 different restaurants and eateries. Located just a few minutes from Kochi Castle, Hirome Market is the perfect place to visit after you’ve had your fill of traditional Japanese sights. You’ll love the variety of Japanese and foreign foods in this cuisine market. Be sure to come with an empty stomach so that you can try as many treats as possible. And with the Hirome Market being open until 9:30 pm it means that you can treat yourself to a late dinner or even try drinking with the locals.

Stop by and at least enjoy the funkiest facade in Kochi, but if you're in need of a quiet rest and a decent cup of coffee, Mephistopheles is a good place for that too.

Warung Cafe near Kochi Castle is a small cafe with a big taste and feel of Thailand.

Katsurahama Beach in Kochi Prefecture is a good site for a half-day trip. If you’re looking for a day of waves, sun, and sand—unfortunately, Katsurahama Beach is not going to provide. Swimming here is prohibited due to strong currents. However, in lieu of swimming, there are some great sights and spots around the beach. Visit the statue of Sakamoto Ryoma, the famous revolutionary who helped shape Japan; a nearby aquarium makes for a relaxing walk; visit the small shrine on Katsurahama Point; or try katsuo no tataki (lightly broiled bonito or skipjack tuna)—Kochi’s specialty dish—at one of the local restaurants.