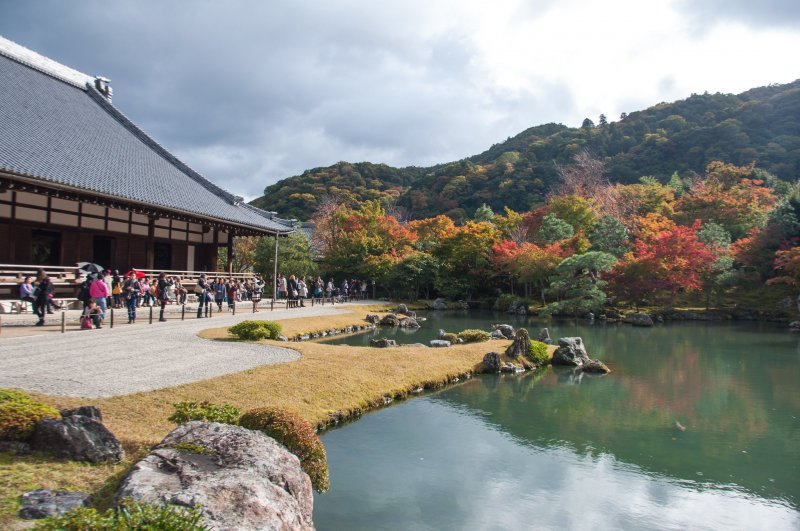 The Tenryuji is the main temple of the Rinzai Zen Buddhism sect of the same name and is located in the Arashiyama district in the northwest of the city of Kyoto. It is the most important Zen temple in the city and is a UNESCO World Heritage Site.

The temple was built in 1339 by Shogun Ashikaga Takauji, who dedicated it to the recently deceased Emperor Go-Daigo. Both men were former allies until Takauji rebelled against the emperor in the struggle for supremacy in Japan. The temple should pacify the spirit of the deceased.

The buildings of Tenryuji have been repeatedly destroyed by fire over the centuries, so that the current complex largely dates from the Meiji period (1868-1912). In contrast, the surrounding garden, which was designed by the well-known master of gardening, Muso Soseki, is still almost entirely original.

Especially in autumn, when the foliage of the trees there and the Arashiyama mountains visible behind them turn red and yellow, the Tenryuji and its garden are a popular destination.

Tenryuji, the Temple Of the Heavenly Dragon, is a UNESCO World Heritage Site in the Arashiyama/Sagano district of Kyoto. It is the main temple of Rinzai Zen Buddhism.

Tenryu-ji Temple: Like most places in Kyoto this time of year, the Japanese Maples were in full bloom and proud as a peacock. Everyone here was cheerful and excited...and happy to be alive.

One of the attractions in Arashiyama is Tenryu-ji Temple and it is listed as a UNESCO World Heritage. In summer, you will see the temple and its garden in green colors. You can also sit by the corridor of the temple to gaze into the pond and the blue skies and let your mind drift with the cicadas singing its melody.

Tenryu-ji Temple and the nearby Sagano Bamboo Grove are justly famous for their year-round beauty.

In Kyoto's Arashiyama, the landscape of cherry blossoms and autumn leaves are very special, although this district attracts people throughout the year. The great Zen master, Priest Muso Soseki, designed Tenryu-ji Temple's Hojo Garden in 1345.

Sagano is a peaceful strolling district in Kyoto

Zen Buddhist Cuisine at Kyoto's Tenryu-ji temple is certainly a culinary adventure and definitely worth being put on the ‘must-do-while-in-Kyoto’ list.

Shojin-ryori Zen Buddhist vegetarian cuisine at Tenryuji temple in Arashiyama, Kyoto is served to you by monks in a stunning picturesque setting

Close to Nijo Castle in Japan's most historic city, this stylish, modern hotel is comfortable, well located and supremely affordable.

The Splendor of Houka East and West

Finding a great place to stay in any city is always a challenge. But nestled on a quiet street a brief walk from Kyoto Station, perfectly-located luxury accommodations await travelers.

At Saga Tofu Ine in Arashiyama, yuba and tofu are served in many different ways. Some dishes are roasted, some are boiled, and some fried. Saga Tofu Ine is located about ten minutes by foot from the JR Saga-Arashiyama Station, and is directly across from the temple, Tenryu-ii. One may sit on the second floor and look into the temple and the greenery with a peaceful mind and a big appetite.

Kohaku-do is a casual French restaurant in Kyoto, Arashiyama. It is situated just a few minutes from Tenryu-ji Temple. And other train stations such as JR Saga-Arashiyama, Arashiyama Station on the Keifuku Dentetsu Line and Hankyu Line are all within a few minutes walk. The price range for the lunch sets is 2000-3000 yen, including hors d’oeuvre, soup, bread, a main dish, desert and a drink-bar. We ordered grilled whitefish and a hamburg steak. Both of the main dishes were quite good!

Hirokawa & Dining Out in Arashiyama

Foods Choices in Arashiyama. Serene eating encounters with eel or energy of the masses

The Arashiyama Bamboo Forest is one of the most popular attractions in Kyoto and is made up of numerous trails for visitors to enjoy. For the best photos, make sure to get here early in the morning as it gets crowded very quickly. It's not just the beauty of the bamboo that attracts people. The Arashiyama bamboo forest is one of the 100 most beautiful soundscapes in Japan, which are designated by the Japanese Ministry of the Environment. The sound of the rustling bamboo swaying in the wind is almost meditative. If you walk along the main street of Arashiyama, you will also pass Tenryuji Temple, one of the most beautiful Zen temples in Kyoto. According to Japanese tradition, bamboo is a symbol of strength. Therefore, it often happens that a Buddhist temple or Shinto shrine has a small bamboo grove on its premises to ward off evil.

Ōkōchi Sansō is the former home and garden of the Japanese jidaigeki actor Denjirō Ōkōchi in Arashiyama, Kyoto. The villa is open to the public for an admission fee and is known for its gardens and views of the Kyoto area. Several of the buildings are recorded as cultural properties by the national government. [Wikipedia]

Nison-in is a Tendai Buddhist temple complex in Ukyō-ku, a western ward in the city of Kyoto, Japan. The temple's official name is Ogura-yama Nison-kyō-in Keidai-ji. The temple is a popular destination during the Japanese maple viewing season. [Wikipedia]