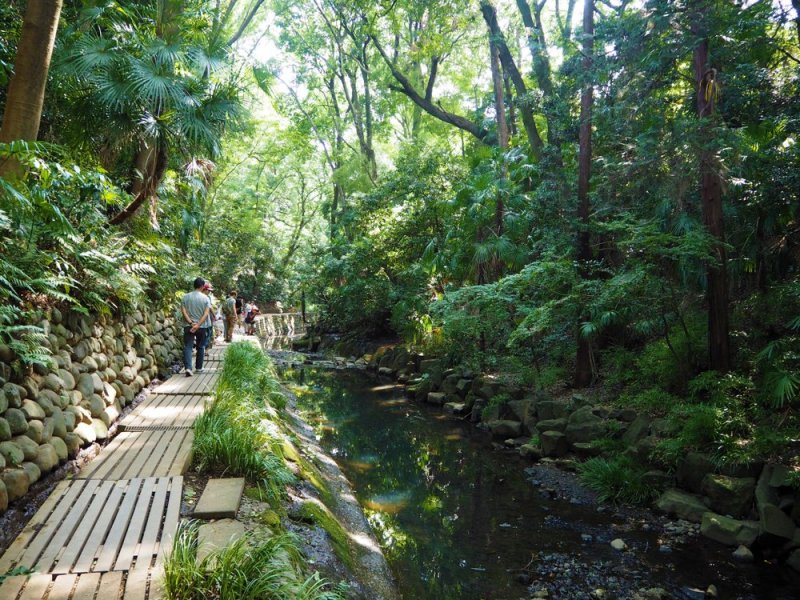 The Todoroki Valley is an attractive hiking trail that runs for about a kilometer through a narrow, forested valley along a small river, right in the heart of the Setagaya District. It is a popular choice for those looking for a quick escape from the daily cityscape.

Just 20 minutes from Shibuya or Shinjuku, Todoroki can be reached by local train and is close to nearby Jiyugaoka, famous for its pastry shops and desserts. There are several points of interest along the way, including some bridges, remains of tunnel tombs and lookout points for geological rock layers.

At the other end of the valley is the Todoroki Fudo, an atmospheric temple.

Enter a parallel universe by exploring the only valley within the city limits of Tokyo.

The Beauty of Todoroki Valley

Enter a parallel universe by exploring the only valley within the city limits of Tokyo.

One of Tokyo’s most unconventional green spaces, Todoroki Valley is located just 20 minutes away from Shibuya Station and in the center of the densely populated Setagaya Ward.

Tokyo is very hot and humid during summer; however, you can escape this heat with a visit to Todoroki-valley.

Social Residence Tama Plaza is a sharehouse located in Shinishikawa, Aoba Ward in Kanagawa Prefecture. It is a 8 minute walk from Tama-Plaza Station, and takes only 20 minutes on the Express train to Shibuya station on the Den-en-toshi line. The sharehouse is conveniently located around various amenities such as a supermarket and a shopping centre.

In the Highball Bar Sunny Side 1923 in Gotanda Shinagawa, guests enjoy freshly tapped beers and, in addition to a dinner menu, of course, highballs are offered. These consist of a basic spirit and, for example, soda water or ginger ale. They can also contain other ingredients and are extremely popular in Japan. The menu is also available in English, so that even foreign-speaking visitors will have no problems enjoying a relaxing evening. The bar offers 26 seats and 30 standing places and children are also welcome. The bar also offers a very special bonus with its own room for small private groups. Users of Japanese mobile phone networks are given the opportunity to use high-speed WiFi from the providers Softbank, NTT Docomo or AU.

Komazawa Olympic Park, located in both Meguro and Setagaya, Tokyo, is a sports facility built for the 1964 Summer Olympics. Approximately 90 percent of the park area is in the Setagaya district, while the remaining 10 percent is in the Meguro district At the beginning of the 20th century, the area served as a golf course, on which even Emperor Hirohito and King George V of England were invited to a game. The extensive grounds offer several sports facilities, including baseball fields, tennis courts, a swimming pool and a sports hall. There is also a stadium for 20,000 people, which is a venue for both soccer and American football games. There is also a very nice route that is ideal for jogging or cycling. [Photo: no_typographic_man / CC BY-NC-ND 2.0]

Sangenjaya is an area within the Setagaya district in Tokyo. The name Sangenjaya means "three tea houses", but the locals often refer to it simply as 'Sancha'. The neighbourhood is littered with chic cafes and bustling izakayas. It is also known for its 27-storey high Carrot Tower building, the Setagaya Line tram, and for being the inspiration for various settings in the game Persona 5.

Gotokuji Temple is a Buddhist temple from the Edo period that is believed to be the birthplace of the Maneki-Neko cat. The temple is located in Setagaya, Tokyo, so it is a very special place for cat lovers. Legend has it that Ii Naotaka escaped an unexpected thunderstorm in the early 17th century because he was invited to the temple by a cat. To show his gratitude to the cat, Naotaka decided to dedicate the temple to the Ii clan. The famous Maneki Neko figures can therefore be found all over the temple grounds. These figures, which are very popular in Japan and can often be seen in shops, are supposed to wave good luck with their waving paws. Although there are many different types of Maneki-Neko figurines that can choose to raise their right or left paw, Gotokuji Temple specializes in the right-paw version of this lucky symbol.