A festive market for this symbol of perseverance 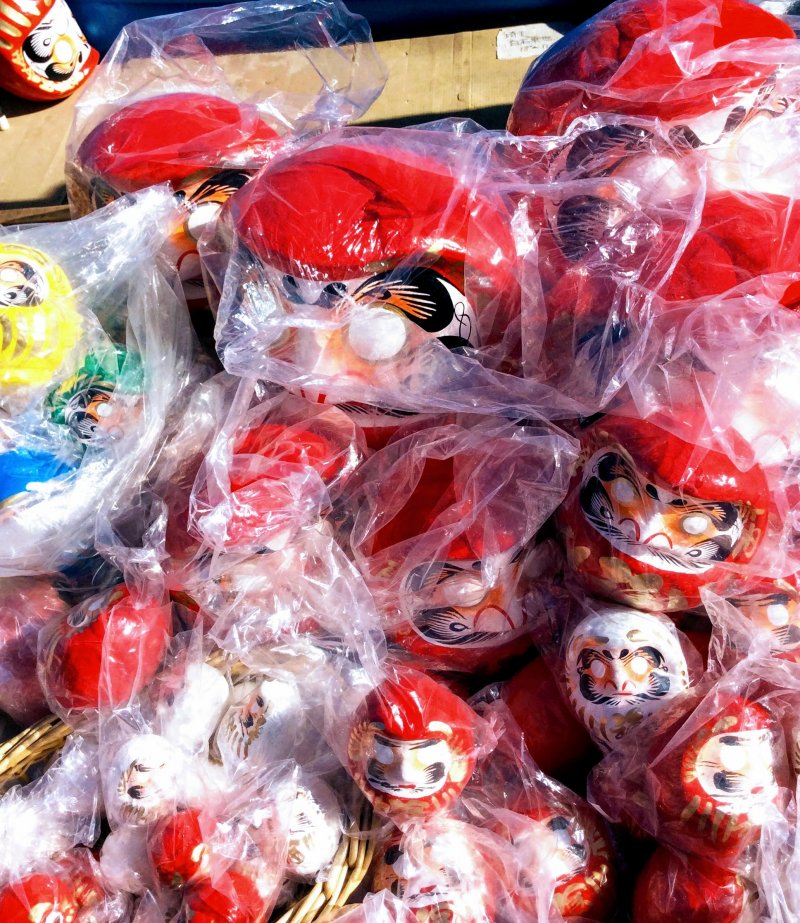 A daruma doll is a hollow wooden round-shaped face with a beard. Most commonly they are red in color. When bought new, they have no eyes painted in. You paint one eye on receiving or buying the doll while making a promise to yourself, a New Year's resolution as such. When you have completed the resolution, you paint the other eye.

Every year on January 3rd, several temples around Japan have a Daruma doll market. People come to buy a new Daruma doll for the New Year. The Daruma doll has become one of several symbols of New Year. It is also a symbol of perseverance. In Saitama Prefecture, one of the better known Daruma Doll Market's is at Kitain Temple in Kawagoe city. Dozens of daruma doll vendors set up booths along the east side of the temple grounds, on the path that leads to Naritasan Temple. When somebody buys one of the larger sized daruma dolls they ring out bells and the crowd explodes in simultaneous cheer. It is one of several New Year festivities held at Kitain Temple annually.

* Unfortunately, this event has been cancelled this year in a bid to curb the spread of the Covid-19.

Kitain Temple is located away from the main tourist area of Kawagoe, but as an important and popular historic and aesthetic attraction in Kawagoe, all the tourist buses stop nearby. You can also walk from any of the three stations in Kawagoe: Kawagoe Station, Kawagoeshi Station and Hon-Kawagoe station. It takes about 25 minutes on foot from each.

There is a car park at Kitain temple. It has a flat charge of ￥500. During the first three days of the New Year it is extremely hard to get parking. And only part of the car park can be used during this period. It is highly recommended that you come on foot or by bus.

Find out more about Kitain Temple.