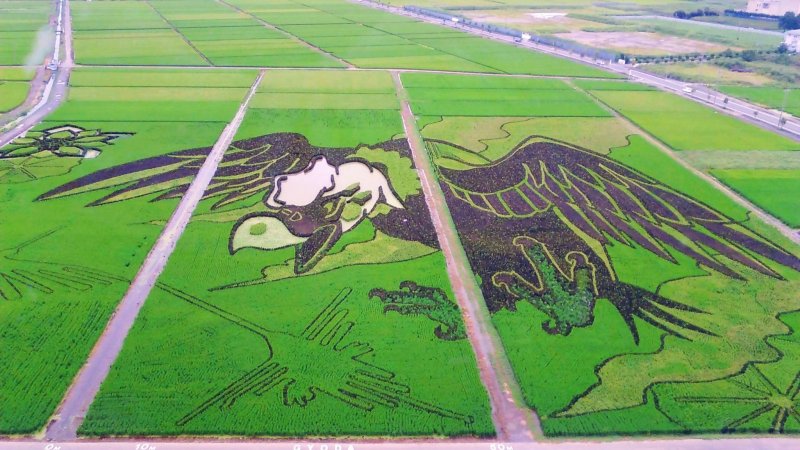 A canvas of grain

Rice Field Art - are you picturing a gallery in a rice field? Because when I first heard the buzz about the rice field art in Gyoda City Saitama, that is what I pictured. In my defense, I am not from a rice-growing country so my mind didn't go to the glorious truth; art made from rice plants in a rice field. It is a sight to behold.

Every year, in June, the rice is strategically and carefully planted so that it grows in the design of the image for that year. The image is decided on by a committee. Planting is a community effort. Dozens of locals and even people from further afield, who have applied to participate, work together under the guidance of the rice field art committee to plant the rice in the correct position. They use nine different types of rice for contrast, over an approximate area of 27,000 square meters. The result: a piece of art in the rice field. Every year the image is different.

The 2015 depiction, pictured above, was the one that won the Guinness Record World as the largest rice field art in the world. The 2019 depiction took on a Rugby World Cup theme.

The image should be visible from around early to the middle of August with the best viewing in early September. The image usually remains visible until early October, although toward the end it is not as clear or as dynamic. It can be seen from the observation tower of Kodai Hasu no Sato, which affords a birds-eye view.

Entrance into the observation tower, which is also home to a small lotus museum, costs 400 yen for an adult and 200 yen for children six years old or over. The tower is fifty meters high and gives a 360 view of the park, Gyoda city, and the surrounding areas.

By public transport: You can get a city loop bus from Gyoda Station on the JR Takasaki line to Kodai Hasu no Sato.