A great sense of accomplishment

If there’s one penultimate activity for the visitor or resident in Japan, it is climbing the honourable Mount Fuji. You may have tackled onsen and natto, navigating in Japanese or navigating Japanese toilets, but when it comes down to it, a lot of foreign tourists are far more content to simply see the venerable mountain rather than ascend it.

I’ll admit that it’s a daunting task, and not one undertaken lightly – unless you happen to be a particular breed of tourist, you probably would rather let your photos taken from the Shinkansen suffice. Climbing Fuji, however, is a fantastic experience for the well-prepared traveler, and will provide you to with a great sense of accomplishment, should you make it to the top.

*Editor's note: If you prefer someone else to worry about these sorts of details, you might want to get in touch with a guide such as Nori.

The mountain (called Fujisan or 富士山 in Japanese, not Fujiyama as it is often mistakenly romanized) has a climbing season that is officially open from the beginning of July to the end of August. Climbing outside of season is considered very dangerous and should not be attempted by any but the most experienced climbers. Amenities are available only during climbing season, and even the roads leading to the 5th stations are closed.

There are ten “stations” to the mountain, starting at the lowest elevation and ending at the peak. As the land between the 1st and 5th stations is a gentle slope filled with towns and trees, the vast majority of climbers start at the 5th station, about halfway up. As this is considered the “base” for most climbers, the 5th station is well-equipped with tourist shops, toilets, bus stops and the like.

The hiking trails of the mountain are serviced by four separate main paths starting from different sides of Fuji. These trails are called the Lake Kawaguchi, Subashiri, Gotemba, and Fujinomiya routes, and each has different advantages and disadvantages – the Fujinomiya Trail is the shortest route, with huts for resting (beware – you need to book these in advance!) and stations that are relatively evenly spaced. It is steep, however, and does not offer a view of the sunrise should you be climbing at night and unable to reach the top before daybreak. The Gotemba Trail is less-used and therefore less crowded, though it also has less huts to rest in. The Subashiri Trail has a gentler slope than other trails, but will of course take longer than a steeper route. These three are all located starting in Shizuoka Prefecture. The final trail, Kawaguchiko is very well-developed but can be very steep at points as well. It has the best access from Tokyo, as it is the only trail starting from Yamanashi Prefecture. Kawaguchiko merges with Subashiri and Fujiyoshida (a trail that begins at the 1st Station) at the 8th and 6th stations, respectively. Do not rush your climb – altitude sickness from moving up the mountain is more than enough to ruin the experience.

An absolutely integral part of climbing Fuji is to come prepared, and I speak from experience on this point! You will need a good pair of boots or shoes that will protect your ankles from rolling on the soft ground. You will also need warm clothing, including gloves, and wearing layers is recommended. The bottom of the mountain will feel like August but the top will feel like January. And I cannot stress enough how important rain gear is. Once you reach the cloud cover, it will start to rain, and if you are soaked, you’ll find it nigh-impossible to continue once you reach the colder air at the top. For night climbing, a flashlight is essential, and sunscreen for the daytime. The sun can be merciless even if you feel like it’s too cold to get burned. You will need water, of course, and while some food is available along the way, it’s better to come prepared with your own. Finally, a walking stick is a very useful item to have, and can serve as a great memory of your trip. These can be purchased from the shops at the 5th station, and even some of the convenience stores further down. You can have special stamp imprints burned into the stick at each station. For overseas visitors who wish to take their hiking stick home, you can bring it to a post office; they’ll put a label on it and send it back for you. SAL shipping is about 1,500 yen. Should you forget something essential (water, rain gear, etc) there are small shops on the mountain that will offer select items at a premium.

What you make of the Fuji experience is, of course, up to you. At the top, you can eat in the cafeteria area, send a postcard (with a special stamp!) from the Mount Fuji summit post office, or take a walk around the enormous crater. The sunrise is breathtaking, which is why many people prefer to climb through the night and watch the sunrise from the top of the mountain. Still more take advantage of the mountain huts, and climb through dusk to a station close to the summit, then rest in the huts until shortly before sunrise. (Beware – everyone will be trying to leave the huts at the same time, and a huge bottleneck usually occurs!) Others will try the daytime climb to fully enjoy the scenery; particularly impressive on the Subashiri Trail.

Myself, I think there’s no better way to recoup from the arduous climb than to head directly for a ryokan, a Japanese-style inn, as soon as you hit the bottom again. A long dip in the famous hotsprings of the area will be sure to soothe all those aching muscles so that you’re ready to start exploring Japan again the very next day. 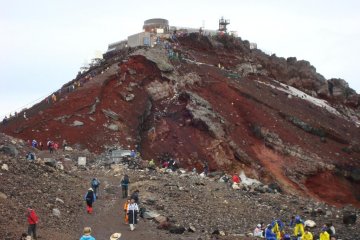 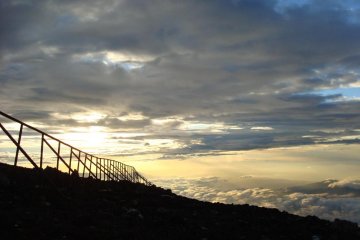 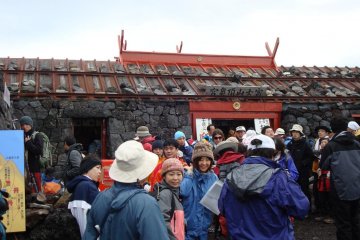 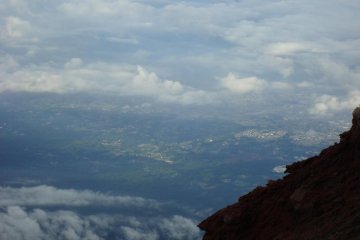 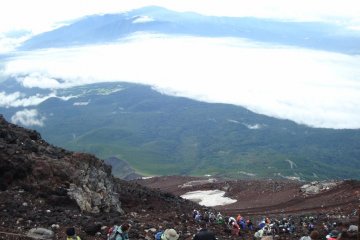 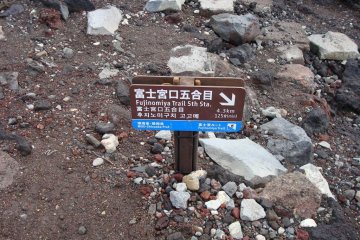 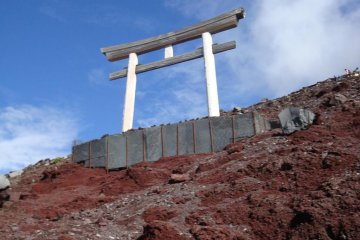