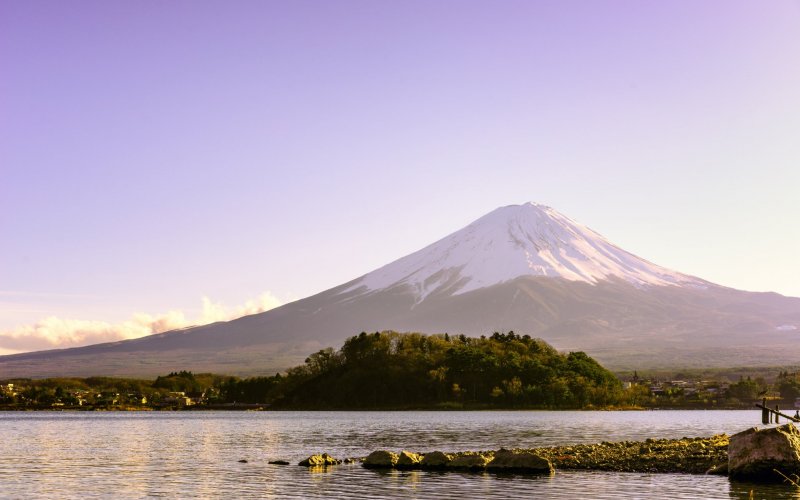 At 3,776 meters above sea level, Mount Fuji or Fujisan is the highest and most famous mountain in Japan. It is located on the main island of Honshu on the borders of the Shizuoka and Yamanashi prefectures and, when the weather is clear, is even visible from Tokyo. It has been since 2013 part of the UNESCO World Heritage.

It is a stratovolcano on the Pacific Ring of Fire, which is classified as active, but with a low risk of eruption. Its last known eruption was in 1707 and lasted about two weeks. At the northern foot of the mountain are the five Fuji lakes.

In Shinto, Mount Fuji has been sacred for centuries and around it are more than 1,300 so-called Sengen shrines. The mountain also plays an important role in Buddhism, because in the so-called Shugendo, climbing a mountain is viewed as an expression of faith. Due to the strikingly symmetrical volcanic cone, Fuji is widely regarded as the most beautiful mountain in the world and is often viewed as a symbol of Japan. At the same time, it is a popular subject in Japanese art and can be found, among other things, in the famous woodblock prints by the artist Hokusai. Fuji is also the subject of many poems in literature.

Four hiking routes lead from different starting points to the summit of Mount Fuji: Yoshida Route, Subashiri Route, Gotemba Route and Fujinomiya Route. Climbing Mount Fuji is only permitted during the summer months from mid-July to mid-September; the routes and mountain huts are closed out of season.

The Yoshida Trail is the most popular route, and is the only trail that originates in Yamanashi Prefecture at an elevation of around 2300 meters. The trail’s starting point is known as the Fuji Subaru Line 5th station. Higher up the mountain, the Yoshida Trail offers the largest concentration of huts between the 7th and 8th stations.

The Subashiri Trail begins on the eastern side of Mt Fuji in Shizuoka Prefecture, and its 5th station sits at a slightly lower elevation of 2000 meters. The Subashiri trail actually joins up with the Yoshida trail around the 8th station.

The Gotemba Trail begins on the southeastern side of the mountain, in Shizuoka Prefecture. With the 5th station here sitting only at 1400 meters above sea level, a hike to the summit from this starting point takes the longest of all the routes.

The Fujinomiya Trail is the southernmost of the four trails and the most accessible starting point for travelers coming from western Japan. With a starting elevation of 2400 meters above sea level, this is the shortest of the trails to the summit but the only one that offers zero visibility of a morning sunrise, until the final arrival at the mountain’s peak. About a half dozen huts are located along the route.

Essential info on climbing Japan's largest mountain, Mt Fuji. Know what to expect, things you need and when to go.

Climbing Mt Fuji did not always go smoothly. Here are the mistakes I made so that you can learn from them.

I get a glimpse of Mount Fuji in the bright sunshine, rising above the other mountains, with its distinct concentric form and snowy top.

Climbing Mount Fuji was one of my most inspiring experiences.

Climbing Mount Fuji is a fantastic experience for the well-prepared traveler, and will provide you to with a great sense of accomplishment.

Reminiscing the Climb up Mount Fuji

From fifth station to the peak, up and down Mount Fuji in 13 hours.

Climbing Mount Fuji via the Yoshida Trail from Kawaguchiko 5th Station, watching the sunrise from the summit and descending the Gotemba Trail.

Halfway up Mount Fuji Fall arrives early, and views from the Subaru Line Fifth Station, where many climbers start their ascent, are truly magnificent.

Climbing Mount Fuji to the Seventh Station on the Fujinomiya Trail, where strong winds made us decide to turn back.

Sunrise on the Top of Mount Fuji

Watching the sunrise from the top of Mount Fuji, Japan's highest mountain, is an unforgettable experience—incomparable to any other sunrise I have ever seen.

My Journey to Mt. Fuji

The experience of traveling to see the iconic Mt. Fuji in Japan

Keen to tackle Mt. Fuji in the safest, most enjoyable way possible? One local man could be your ticket to the top: Freelance hiking guide Noritoshi Ikezawa, aka Nori.

Mt. Fuji World Heritage Centre in Shizuoka offers the chance to learn about Mt. Fuji. The centre is a beautiful building whose reflection in the water recalls images of Mt. Fuji itself. Inside, there are video images of the mountain's ascent and a viewing terrace.

The Radar Dome Museum in Fujiyoshida is a piece of Mount Fuji's recent history.

My Adventure on Mount Fuji

In July 2015 I climbed Mount Fuji with a couple of friends. What follows is my experience.

A Day Tour of Mount Fuji

Take a day tour to Japan's Mount Fuji, also visiting shrines, a waterfall, and sacred ponds, and including lunch and the chance to try local delicacies.

The Kawaguchiko/Yoshidaguchi route is the most popular route among Japanese climbers of Mt.Fuji.

A New Plan for Fuji-san

After a not too successful first Mt. Fuji climb, I created a new plan to ascend the mountain based on the much easier Gotemba Trail.

Another Good Plan for Fuji-san

Climbing Fuji-san can be easily combined with a good and informative vacation in the Fuji Five Lakes area with its great variety of shrines, unique museums and great views of the famous mountain.

Mt. Fuji is the highest mountain in Japan and the is 3776 M above sea level. Mt.Fuji is also now known as a world heritage site. More than 200,000 people climb to the top of Mt.Fuji every year, over 30% being foreigners.

Mt Fuji, the majestic, sacred, and highest mountain in Japan, should not be underestimated when planning to hike it with the goal of reaching the summit.

NTT Docomo has made free Wi-Fi available to foreign hikers at Mt. Fuji during its open-mountain season from July 10th to September 10th.

Shiraito Falls is a waterfall in Fujinomiya, Shizuoka Prefecture, near Mount Fuji, Japan. It is part of Fuji-Hakone-Izu National Park and has been protected since 1936 as a Japanese Natural Monument. The falls were regarded as sacred under the Fuji cult. [Wikipedia]

A Day at Makaino Farm in Fujinomiya

Experience the life of a farmer in a day as you pet and feed the rabbits and hamsters, milk the cow and ride on the horses at Makaino Farm on Asagiri Plateau located at the foot of Mount Fuji. If you don't enjoy being with smelly animals, there are other activities to enjoy in the place, like having a picnic and relaxing on the hammocks.

Lake Tanuki is an artificial lake created in 1935 to form a reservoir for irrigation purposes. In good weather, Mount Fuji can be seen reflecting on the still waters of the lake.