Home of singing floorboards and a famous zen garden

Something foreigners may find strange in Japan is the way many Shinto shrines and Buddhist temples are situated practically on top of each other, but operate harmoniously. This goes back to the introduction of Buddhism to Japan and is a lengthy story I’ll not get into, but it makes it very convenient for touristing!

Ryotanji was founded in 733 by the priest Gyoki and has grown since then, thanks to the patron lords of the area (the Ii family). Intentionally burned by the opposing lord Imagawa in 1572, the Ii family was behind the re-building in the Edo period. The new main hall dates back to 1670, with the special floor boards installed in 1676. Ryotanji is one of the 5 famous temples of the northern Lake Hamana area.

We entered the Ryotanji temple grounds from the back left corner of the Iinoyagu Shrine area. To the right was a graveyard which visitors are not barred from, but remember to be respectful. It may look different that cemeteries westerners are used to, but it’s a final resting place of many people, just the same. It was nice to see how tidy the old graveyard was in most places. This is thanks to the Japanese tradition of keeping the graves clean and nice in honor of their family members.

Moving into the proper grounds of the temple, we explored the pathways and enjoyed the cherry blossoms and other flowering trees and plants I can’t name. It’s a very green and peaceful place and just being there is a relaxing experience.

The main buildings of the temple are open to visitors and for 400 yen, you can get a little pamphlet in Japanese (which really doesn’t say much at all) and admission to the building. As with many old buildings open to visitors, there is an entryway with shelves where you are to take off and leave your shoes. It was a very quiet day and our shoes were the only ones on the shelves.

We padded in sock-feet down the first hallway, cameras in hand, behind a friendly man who adopted us as our guide (he was speaking only in Japanese and I did my best to translate for my friends. Don't expect an English guide or a guide at all!). In case you’re wondering, the first room you pass on the left is a kitchen (it’s not in the pamphlet). You may notice the floor creaking beneath your feet. Don’t worry – it’s not a signal to go on a diet or even aged floorboards groaning. Ryotanji has “nightingale” floors which are specially engineered to creak a bit when anyone walks on them. This is a security measure employed in various special locations around Japan including Nijo Castle in Kyoto. If one or two people make a racket (and the temple is so quiet you may feel a bit like an elephant), imagine the cacophony an intruding force would cause! The nightingale floors are so-called because they allegedly sound like the song of a nightingale. The floors at Ryotanji were designed by Jingoro Hidari.

There are several rooms on the right which feature a variety of Buddha statues which represent the different versions of Buddha. The first is a Zen Buddha statue over 330 years old. The second room was a beautiful sight covered in flowers when we visited. It was spring and the temple was celebrating Buddha’s birthday (April 8th) and the accompanying Flower Festival. We got to wish Buddha a happy birthday by pouring a small ladle of sweet water over a tiny statue of Buddha.

Across from the main Buddha statue in the middle hall (and Birthday Buddha), is the most beautiful view of the front garden. It was much prettier from the walkway than it was from the path outside. You can appreciate the full view from inside.

The next room has a Buddha statue which is interesting because if you look at it head-on, he looks serious, but if you look at him from an angle, he looks like he’s smiling slightly. I’m pretty sure our guide told us that the statue was over 700 years old.

Back out in the hallway, we were shown the carved dragon in the hallway. This piece was made by the same person who made the floors. Even though the name of the temple is read 'RYO-TAN-JI,' the first character in it is dragon ('RYU'). The small but impressive carving is Ryotanji’s dragon.

There are several other small, connected buildings which feature a few historical treasures belonging to the Ii family, long-time patrons of the temple dating back to long before the Sengoku period. Guests can pass through these at their leisure. From the back-most walkway, have a look toward the back garden. From here, you can see the prettiest view of the famous garden. You can see the beautiful curve of the building and the greenery of the garden.

The back Zen garden, designed by Enshu Kobori, is apparently famous. If you see a picture of Ryotanji, it will most likely be of the back garden. It's very carefully laid out with special shapes and significance. The pond is shaped like a dragon (according to our guide, but like the character for 'heart' according to the pamphlet). The largest mound in the middle symbolizes Buddha and aligns with the Buddha statue inside. There are large stones on either side which symbolize the temple guards (the slightly scary statues you see at the gates of any given temple). Some of the large stones in the front right are shaped like a turtle. There is a flat stone on the edge of the pond where one can sit and pray or meditate. The layout of the garden is also detailed in the pamphlet so you have a chart to visualize it better. There is an audio recording, but it's only in Japanese and with my limited language skills, I found it a bit difficult.

After that, we’d made the loop and seen what there was to see and headed out the back way. It’s a driveway-like lane that leads to the road, which took us back to our bus stop. 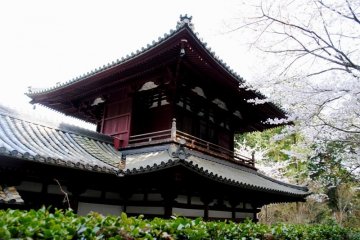 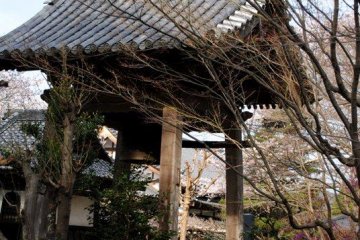 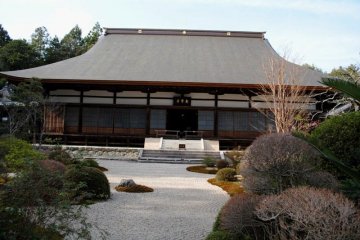 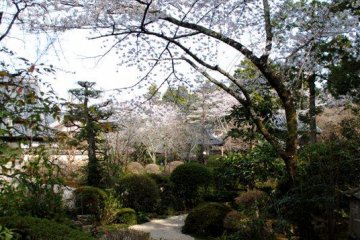 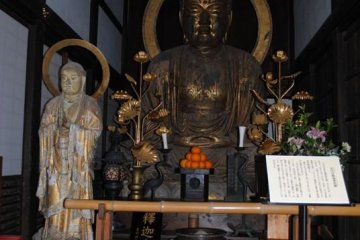 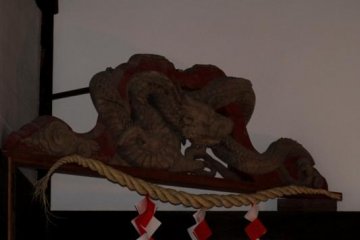 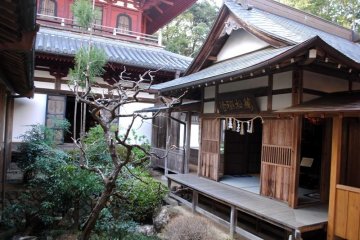 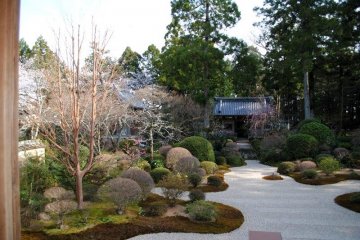 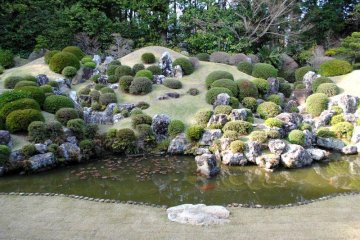