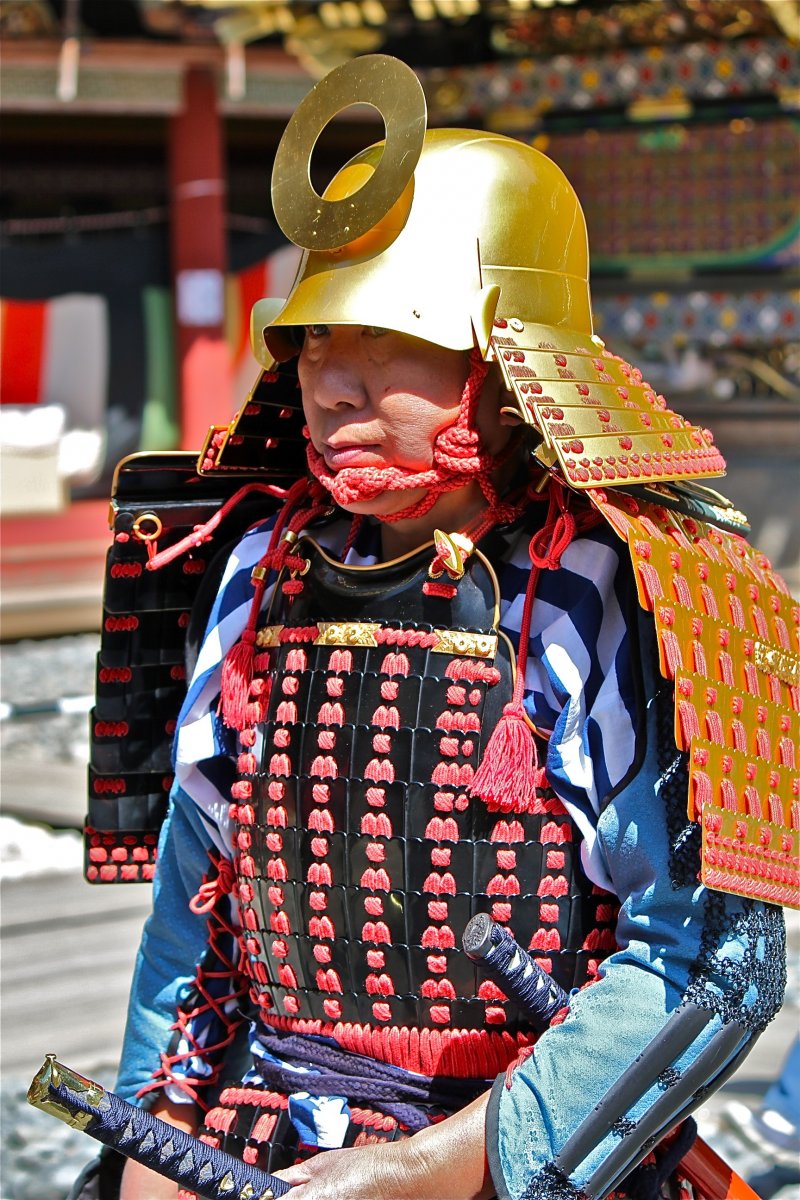 Mid May
One of the thousands of the locals dressed in traditional warrior attire for the 1,000-person Samurai Procession in Nikko (Photo: Jessica A Paje)
Venue : Nikko Toshogu Shrine When : Mid May 2022

The 1,000 Samurai Procession, known locally as Hyakumonozoroe Sennin Gyoretsu, is held annually at Toshogu Shrine in Nikko. Designated as a World Heritage site since 1999, thousands of locals gather at Toshogu to parade in Nikko’s traditional warrior attire.

The wider here is the Nikko Toshogu Shrine Spring Grand Festival (Nikko Toshogu Shunki Reitaisai, 日光東照宮春季例大祭), held annually May 17th to 18th. This Togyosai festival procession takes on the second day (May 18th), where portable shrines are moved to the Otabisho along the 1-km road at 634-m high (the same elevation as Tokyo Skytree). The event is preceded by Yabusame, or horseback archery, on the first day of the Spring Grand Festival (May 17th).

The samurai procession is divided into three groups such as "Three sacred horses," "Shinken-mihata," and "Three portable shrines." Each group goes forward as if they guard each other.

Be advised this is a procession and not a festival with music, food, or entertainment that you might be accustomed to seeing. It is a reenactment of Divine Spirit of Ieyasu Tokugawa when it moved from Mt. Kuno to Nikko and each ceremony has a religious meaning.

There are many things to discover while you’re at Toshogu Shrine. Constructed as the mausoleum of Ieyasu Tokugawa in 1617, this shrine was later rebuilt into the present impressive shrine under the reign of the Third Shogun Iemitsu. All the buildings here have been designated as National Treasures and Important Cultural Assets. One of its gates Yomeimon is also called Higurashimon (twilight gate), because viewers never get tired of admiring its beauty all day till twilight. Visitors are also overwhelmed by as many as 5,000 ornate woodcarvings, including Nemuri Neko (Sleeping Cat) and San Zaru (Three Monkeys), which are the culmination of the supreme craftsmanship in the Edo Period.

If you have time to wander, visit the striking red Shinkyo Bridge that stands at the entrance to Nikko's shrines and temples, and technically belongs to Futarasan Shrine. It is located along the way between the railway stations and Toshogu Shrine. But easily accessed by foot as you ascend from the hills of the national treasures.

Due to the location of the procession, I highly recommend bringing water, a shade umbrella, and a face mask if you are sensitive to flying dust along the dirt trail. Entrance fees vary from 200 yen to 1,300 yen for Adults.