Mysterious wisteria with no roots

Daichu-ji Temple, located in the southern part of Tochigi Prefecture, is famous for its seven grotesque 'Tales of Horror' one of which was made famous in the book, Ugetsu. Those seven stories have been handed down from the ancient days to the present, and we can still see actual, physical remnants from them even today: They are: 1) Wisteria with no roots, 2) Slippery stone steps, 3) Cooking stove with a fire that has never gone out, 4) A well with a horse's head, 5 )A rest room door that has never been opened, 6) Wooden clappers in Higashi-yama Hills, and 7) A room where you are in the opposite direction. From these, I would like to introduce the “Wisteria with no roots” to you. The story itself is called The Story of the Blue Hood. It is said to be a true story that actually happened here at this very temple. You can find the full story and many others in “Ugetsu Monogatari” (Tales of Moonlight and Rain, Columbia University Press) by Akinari Ueda (雨月物語 上田秋成著), translated by Anthony Chambers.

The Story of the Blue Hood (Aozukin)

Long, long ago, there was an exceptionally virtuous priest, Kaian, who traveled all over the country. One day, he passed by a village. The sun was setting and dusk had gathered. In the dim light of the dusk, some villagers coming back to to their homes saw him and ran away. Other villagers suddenly screamed. Kaian wondered what was wrong.

It was already dark, and Kaian stopped at a big house and asked for lodging for the night. The owner of this house came out with a cudgel and almost attacked him. But the man was wiser than the other villagers. He looked at the priest carefully. The priest was standing, wearing a blue hood and a dirty black robe. Kaian explained to the man that he was just a weak, helpless priest. Eventually, the man smiled at Kaian and welcomed him into his house. After feeding the priest, the man told him a strange story that had happened in the village...

"We have a temple on the hill behind the village. The priest living in the temple was quite earnest and we all trusted him. But last spring, the priest went to Niigata and came back with a young disciple. The disciple was a beautiful 13-year-old boy. The priest fell in love with him and neglected his duties as a priest. This past April, the young boy was sick and the priest nursed him. But finally the boy died. The shocked priest passed every day lost in his grief. And even though the boy had died, the priest kept the decaying body so that he could caress it every day. And at last, the priest ate its muscles and licked its bones. As a result, the priest has turned into an ogre that eats other humans. The villagers mistook you for that priest in the dark."

Listening to this story, Kaian was sorry for the villagers and also for the priest. He proposed to the man that he would confront the priest/ogre and try to admonish them not to continue doing such horrible deeds.

The next evening, Kaian visited the temple on the hill. It was utterly neglected. The temple grounds were overgrown with weeds and the sutra house was covered with moss. Kaian knocked on the door and asked the emaciated priest who answered the door if he could stay for the night. The priest said that he couldn’t take good care of any guests here. But Kaian said he didn’t mind at all. Kaian sat down in the middle of the floor. Soon the night grew dark. At midnight, Kaian heard a strange noise from the next room. Then the priest came into the room and looked for Kaian and shouted. “Where is the priest, Kaian? What happened to him? He must be here, but he isn’t. Where is he?” Kaian stayed in the same place and the priest passed him by several times. He couldn’t see Kaian, even though he was sitting right in front of him. The priest continued to search for Kaian all night. But he couldn’t find him. At the end, he fainted away and fell down to the floor.

The sun rose and the priest suddenly woke up. And he realized that Kaian was sitting in exactly the same place he had been before. He gazed at Kaian for a while. Kaian approached the priest and said, “you can eat me if you want.” The priest shook his head and said. “You must be a true Buddhist monk, and so I couldn’t see you last night. I’m ashamed that I have a desire to eat human flesh, especially of a holy monk like you.” Kaian said that he knew that the priest sometimes became an ogre, and that his purpose for coming here was to help him. Kaian sincerely asked him if he would like to take back his human soul. The priest said, “Yes.” Kaian put his blue hood on the priest's head and taught him two precious Buddhist phrases. Kaian told him to chant these two phrases again and again, until "you finally get the meaning of them by yourself. Then you will turn back into a human.”

After that, the villagers didn’t see the ogre anymore, and they could spend their days peacefully. The next winter, Kaian came back to the village to see how things were going. No villagers had seen the ogre since his last visit, but still no one had the courage to go to the temple. So Kaian went to the temple again. The temple was under thick weeds and there was no sign that anyone was there. Kaian pushed his way through the thicket, and found a mass of something that had a blue hood on the top it. Kaian heard a faint voice repeating the two Buddhist phrases he had taught the priest last year. Kaian spoke to the mass and hit it with his crosier, “What is the meaning of these phrases?” Instantly, the mass fell into pieces on the floor and just the blue hat and bones remained. Kaian recognized that the priest had finally taken back his human soul. Kaian set his crosier on the ground near the mass that had fallen down.

After that, villagers came to clean the temple, and asked Kaian to house there to teach Buddhism to them. He devoted himself to reviving the temple and it has become prosperous.

Later, a wisteria grew up at the location where Kaian had set his crosier. But somehow, the wisteria doesn’t have any roots in the ground. You can see this wisteria in the inner part of this temple behind the main hall. And there, you can also find the gravestones of both Kaian and the priest who became an ogre. 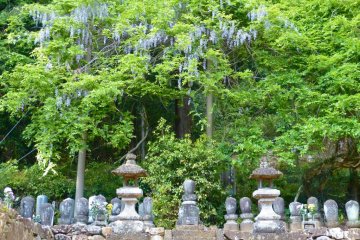 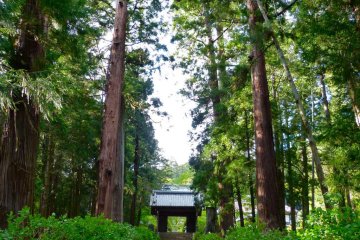 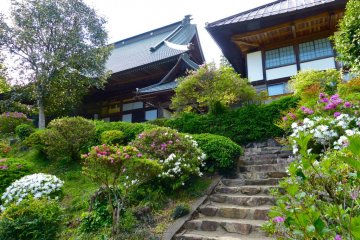 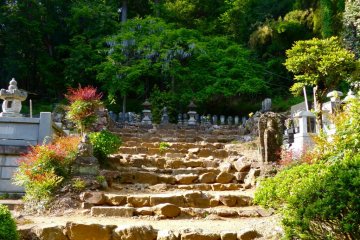 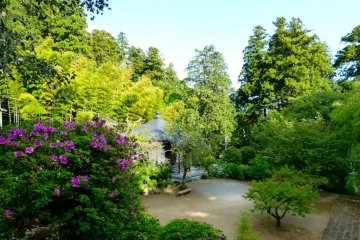 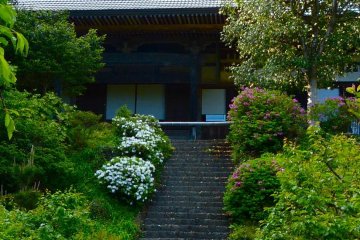 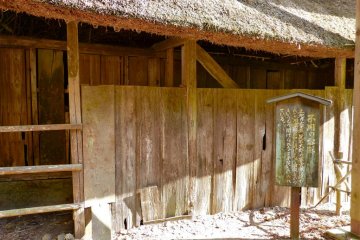 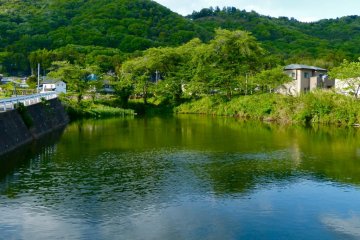