Tomb of 11 German POWs who passed away in the camp, which was built by co-POWs. A local woman found the ivy-covered, abandoned tomb in 1948; since then she and her family members have been taking care of it. In the 1960s, some of the former POWs learned of their kindness and effort, which revived communication between former POWs and the people of Bando (Photo: Takako Sakamoto)

Tomb of 11 German POWs who passed away in the camp, which was built by co-POWs. A local woman found the ivy-covered, abandoned tomb in 1948; since then she and her family members have been taking care of it. In the 1960s, some of the former POWs learned of their kindness and effort, which revived communication between former POWs and the people of Bando (Photo: Takako Sakamoto)
Takako Sakamoto   May 15, 2014 - 7 min read

Can you imagine any POW camp being paradise? I couldn't, until I learned about the story of the Bando POW Camp that existed during WWI, from 1917 to 1920 in Bando, Naruto city, Tokushima. This is the place where aproximately 1,000 German POWs lived in relative freedom, pursued their individual interests, utilized their skills to teach local people, communicated with them, drank beer, ate sausages and hams they made, baked bread, printed their own newspapers, and played classical music; in one word, they enjoyed themselves living in the POW camp very much!

I first learned about the camp from a Japanese/German movie called, 'Bart-no-Gakuen' (literary, Music Paradise of Bearded Men), which was released back in 2006. The promotion video said Bando was the first place where Beethoven's Ninth Symphony was ever played in Japan. To those who live in Japan, it's common to see the tune played throughout the country at the end of every year, and I often wondered why. Intrigued, I further checked out the movie, and learned that the place is located in the same city where my grandfather was born (my grandfather's name is also Bando, which indicates his origin). Well, I had no choice but to see the movie, did I? So I watched it, and learned that this paradise was created by one person, the director of the Bando POW Camp, Toyohisa Matsue. He treated POWs with compassion that could be called, 'Compassion of Samurai' (respecting and honoring opponents), as he was an ex-samurai of the Aizu Clan.

Who is Toyohisa Matsue, the director of the Bando POW Camp? Matsue was born in 1872, 4 years after the Meiji Restoration, as the son of an Aizu Samurai. Aizu Clan sided with Tokugawa Shogunate, which was overthrown by the revolutionary clans that formed Meiji government later. Since his family was one of many Aizu samurai families who were exiled to the rural part of Aomori to eat mud to live on after the civil war, he grew up in poverty and humiliation. Yet with a pride of a Aizu Samurai, he worked very hard and entered the Imperial Japanese Army Academy when he was 20. Later, he was appointed as a Lieutenant colonel of the Imperial Army in 1914 when he was 42, and was assigned to be the director of Bando POW Camp in 1917. Due to his own background as an Aizu samurai, he knew how mortifying and humiliating it was for them to surrender (his family and himself tasted defeat badly), and he so was compassionate toward the POWs. He said in his speech to them, "All of you are brave soldiers who fought till the end, far away from your homeland in the isolated Tsingtao with no help. However, luck wasn't on your side and you had to surrender to the Japanese Army. And I can't help feeling compassion toward you. What I would like you to do is act with honor, as the brave soldiers you are".

Lives of German POWs in Bando Camp The camp was more of a German town than a camp. There were about 80 shops run by the POWs themselves that sold furniture, shoes, ice-cream, etc., while other POWs ran businesses such as a tailor, barber, metalworker, plumber, carpenter, so on and so forth. The director, Matsue, even borrowed 23,000 ㎡ of land in front of the camp, and built a large sports field with the help of the POWs. They made 4 tennis courts, a soccer court, volleyball court, hockey/cricket court, gymnastics gym, wrestling/boxing gym, even bowling lanes and billiard room. And they were operated by the POW 'Sports Association'. Other than that, there was a library, community hall, clinic, and even a theater to perform music or comedy and drama. They issued their own liberal newspaper called, 'Die Baracke'. They wrote about social issues, military issues (the war situation...both countries were still fighting), news of Japan, happenings in the camp, play, music, sports, aphorisms and poems, and so on.

Music Bands There were two music bands in the camp. One was MAK Orchestra and the other was MA Brass Band. They held 34 music performances in 2.5 years, and on June 1st in 1918 played the Ninth Sympony of Beethoven for the first time in Japan. Since then, Beethoven's 'the Ninth' has been played on the first Sunday in June annually in Naruto city, Tokushima.

German POWs in Japan Most of the German POWs from WWI were not professional soldiers, but were volunteer civilians who were living in Tsingtao, China, at the time. Therefore, some of them were professionals with skills, thus, running businesses in their own fields or teaching local people was possible. They taught locals how to play musical instruments, how to raise cattle, brew whisky and beer, bake bread, etc. After the war, most of them returned to Germany, but 170 POWs stayed in Japan, utilized the skills they honed in the camps and started their own business such as a butcher shop, restaurants, cake shop, dairy ranch, etc. One of the most famous companies founded by an ex-POW is Juchheim Co.,Ltd., in Kobe, which was established by Mr. Karl Juchheim, who spent his POW days in Osaka and Hiroshima. The other famous companies include LOHMEYER Corporation in Tochigi which specializes in meat processing. The original LOHMEYER company was founded by another ex-POW, Mr. August Lohmeyer who invented the loin ham.

Lastly, Director Matsue's considerate and generous treatment of German POWs was well appreciated by them, and it started the long-term good relationship between ex-POWs and the local people of Bando, Naruto city, which in 1972 built the Naruto German House to commemorate the historical friendship with German people.

Afterword... To tell the truth, I entertained myself with a 'What if?' theory for a while. As I mentioned, my grandfather was from Bando, Naruto. I didn't really know when he was born, but he looked a little bit foreign, with big eyes and a craggy face. Some of his sons (my uncles) also have a little bit of a western face and they are tall and sturdy for Japanese men. I just wondered whether there wasn't a 'secret love' between his mother and one of the German POWs...and enjoyed fantasizing about the possible secret love affair until I asked my mother who answered, 'He was born in 1915.'....two years before they came to Bando.....Thus, my short-lived romantic fantasy evaporated into thin air! 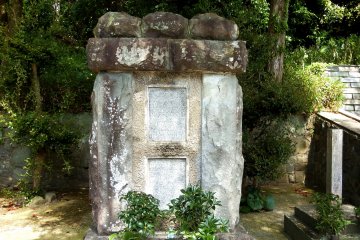 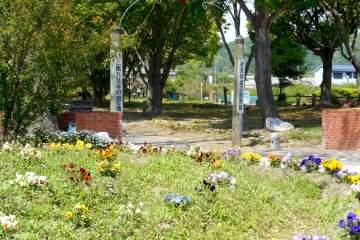 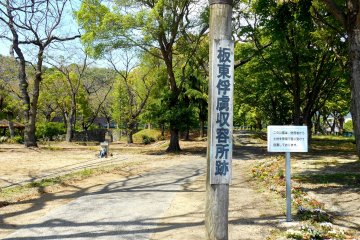 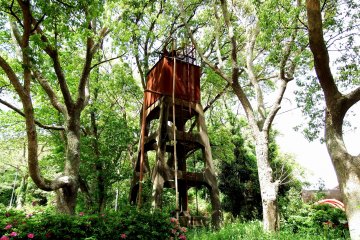 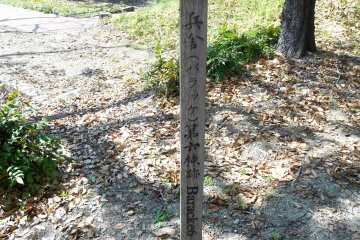 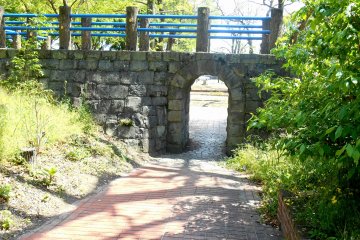 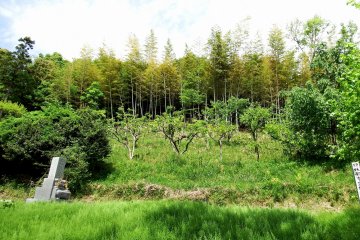 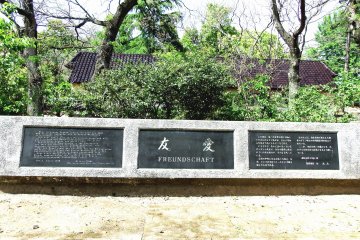 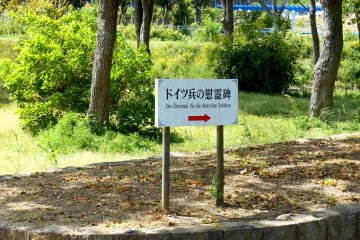 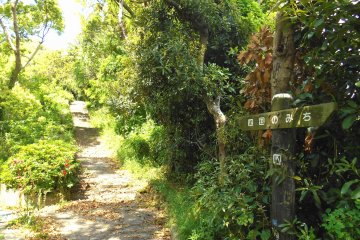 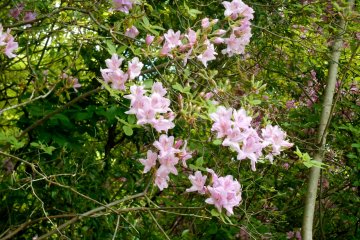 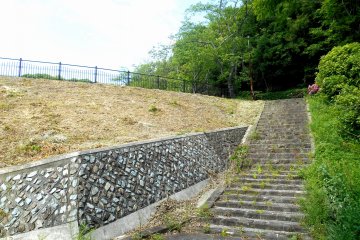 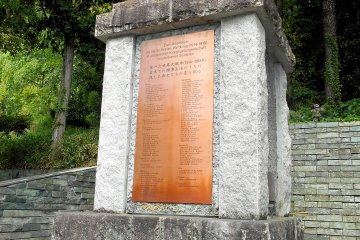 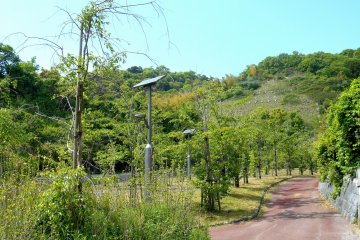