Temple No. 8 on the Shikoku 88 temple pilgrimage

You may not be interested in going to all 88 temples on the Shikoku pilgrimage but it is definitely worth visiting a few--and I would put Kumadani-ji on that list. It is the eighth temple on the pilgrimage that covers the whole island of Shikoku in a twelve hundred kilometer round trip. It is still done by many Henro (pilgrims) on foot but these days, many people without the six weeks or so to spare do it by car, train or bus tour.

At Kumadani-ji you pull into the car park directly beneath a four story tall wooden pagoda. The eaves of the top roof are intricately put together and painted bright colors. Walking up to it with its background of wooded mountains and its well-groomed gardens makes you think you have stepped into a postcard of Japan.

After stopping to take in this massive structure, you continue up a stone pathway lined with hundreds of carved stones that are overhung by impressive Japanese Maple Trees. These large trees have obviously been here a while as they are well established. We visited the temple in summer and, while they were gorgeously green, the trees must be amazing in autumn when they light up red and yellow. There were also quite a few cherry blossom trees around the temple that would really make a trip here worthwhile if you can catch them in bloom sometime around April.

Along this path are some interesting stone statues of the Four Heavenly Kings standing atop of their vanquished. These figures each face one of the cardinal points of the compass and are said to protect from evil.

You then head up a small set of steps to the main gate where you’ll find two figures in bright gilded colors holding swords. You would expect this to be the main gate and contain the Kongo rikishi, the protectors of Buddha, but in fact the main gate where they stand is back out of the car park along a beautiful path of cherry blossoms. It is worth taking the extra time to walk out to them as they are great examples and, unlike many temples, are not hidden behind cages.

Through the gates you ascend yet more steps to the statue of Kobo Daishi and the washbasin where Henro purify themselves before worshipping. Here is also the bell tower before more stairs to the main hall. Walk up there to get a great view of the gargoyles on top of the bell tower roof topped with a giant koi and flanked by two dragons. You may have seen gargoyles atop roofs before in Japan, but never have I seen a more lavish design then these guys surrounded as they are by dragons, lotus flowers and topped with a giant Koi.

There is much to take in at Kumadani-ji but you should also sit for a while and take in the serenity of the place. You never know, you might just walk away a little enlightened. 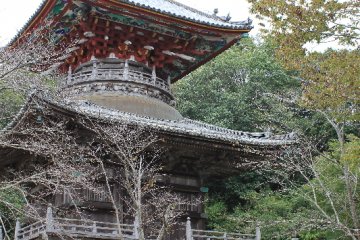 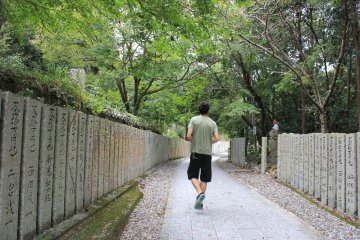 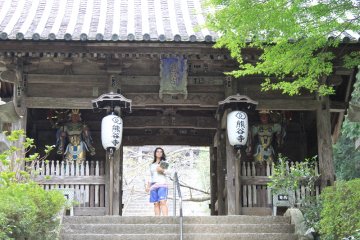 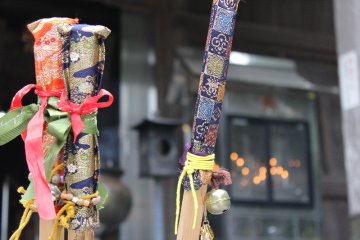 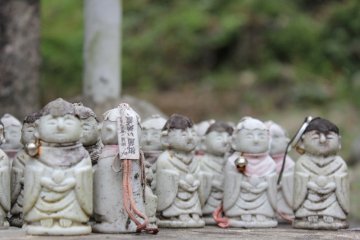 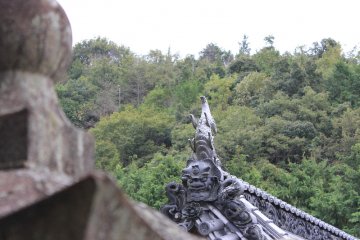 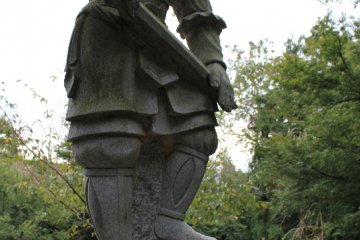