A Day Tour of Yanesen in Tokyo

A practical guide to an easy walking tour of Yanaka

The Yanaka area of Tokyo (in Taito Ward) is a wonderful place for a day's outing. Start at the south exit of Nippori Station (take the JR Yamanote line to get to Nippori). Exit the station, turn left, at the end of the walk take the steps to your left up to Tennoji Temple. It was founded over 500 years ago, but was destroyed in 1868 in the battle between Tokugawa loyalists and the Imperial forces. It's been rebuilt and the current temple grounds are peaceful and nice to see. Upon entering you'll see the temple's main treasure, the bronze Buddha, which dates from 1690.

Leave the temple and walk straight ahead to Yanaka cemetery where many famous people are interred. Just before the koban (police box) look to your left and you'll see the site of the foundation of a former five story pagoda. It was burned down by two lovers in 1957 just before they committed suicide.

At the koban take a right turn and walk to the end of the street. There you'll see a plaque (in English and Japanese) dedicated to Kano Hogai (1828-1888) who was a painter during the early Meiji period. The entrance to Choanji Temple is behind this plaque. Kano's tomb is in this the temple's cemetery. The temple is noted for three stone stupas dating from the 13th century. These were erected for the repose of departed souls. You'll see the stupas, each in a different shape, next to the small Buddhist statures.

Leaving Choanji turn left. There's a shop in an old house across the street selling Estonian goods if you're looking for some unusual souvenirs. Take a left at the first street (just a few meters from Chonaji's gate) and walk along a few meters to see the Edo era temple wall. Turn around, come back to the main road, and turn left.

This will lead you to Kannonji Temple. The head priest of this temple was the brother of two of the 47 ronin, the master less samurai who avenged their master's death and then committed seppuku (ritual suicide) in 1702. Their story became a popular kabuki play.

Walking on along this street there are a couple of places to eat - take your pick of Italian, curry, or otherwise if you're hungry - or wait a bit for a wider choice of menus. You'll also see the small crafts shop, Sandara, on the right side of the street. Another shopping opportunity!

Just past Sandara you'll find Asakura Choso Museum, although as of early November 2012 it's closed for renovations. It was built in 1936 as the home and studio for Asakura Fumio, a Western style sculptor known for creating realistic statues. Continue on along the street then take the next left (right takes you back to Nippori Station). At the "Y" take the right street and go down the steps to Yanaka Ginza, which is an old fashioned shopping street filled with dozens of small shops, places to eat, and snack stands selling "kurokke" (meat and potato deep fried croquets), which you can buy to nibble on as you walk along.

Just before entering Yanaka Ginza, to the right of the overhead steel beam arch, stop in Midori-Ya to see the finely made bamboo baskets (and other goods) that are crafted by Suigetsu Buseki. Not for the faint-of-wallet these baskets fetch a handsome price, but they are truly works of art.

At the end of the street take a left. As you walk along look for the sign for the 10 yen manju (bean paste cakes) shop. It's on the left side of the street. You'll see a white sign with 10 yen and more Japanese on it and there'll be a couple of red cloth covered benches in front of the shop. Buy a pack of 10 manju for 105 yen (must pay that 5 yen tax), have a free cup of green tea (hot or cold), and sit on one of the benches to rest, drink your tea, and enjoy the sweet manju.

Leaving this shop continue along the street to the traffic light. A bit before this light look to your left where you'll see the billboard for the puppet shop. Turn left and walk to the end of the short street and go on in to see these fabulous handmade puppets. If there are at least three people who are willing to pay 500 yen each the shop staff will put on a 30 minute puppet show for you. You can also order a custom made hand puppet that looks like you. They cost 30,000 yen and the current waiting time (as of November 2012) is about two months.

Exit the puppet shop and come back out to the street and turn left, where you'll see the restaurant Oshimaya at the corner by the traffic light. It's on the 2nd floor (up the steps) above an open garage. Here you can have a delicious lunch of soba (buckwheat noodles), udon (flour noodles), oyako-don (chicken and egg rice bowl), or tempura. A cold beer goes down nicely too after all that walking.

If you take a right at the stoplight you'll see the sembei (Japanese rice crackers) shop call Kikumi Sembei. Even if you don't want any sembei it's worth having a look to see and photograph the 135 year old wooden building. If you're tired keep going past the sembei shop where you'll find Sendagi Station.

Otherwise, turn around and head up the slight hill. On your right you'll see the washi (Japanese handmade paper) shop, Isetatsu. They have some beautiful paper, nice papier-mâché articles, furoshiki (large wrapping cloths) that can be tied into handbags, and framed artwork. All would make a nice gift or reminder of Japan.

Continue on up the incline and across from the elementary school is another temple, Daienji. It's rare in that it houses both a Buddhist temple and a Shinto shrine under one roof. It also hosts a chrysanthemum fair during that flower's blooming season.

Leaving Daienji, cross at the crosswalk in front of the school, turn left and take your first right (just beside the school). At the end of this street turn left and a couple of minutes later you'll come to the Daimyo Clock Museum (entry 300 yen). If you like old clocks, and want to see some that show how time was monitored in ancient Japan, have a look in this one-room museum.

Leaving the museum's overgrown garden, turn right, then left on the street you just walked along. Look for the oddly shaped pine tree on the corner and turn left to go down the hill. Before you get to the traffic light look for Imojin Owariya on a corner (left side). Stop by and enjoy a treat of their homemade ice cream (140 yen for a cone at the take-away window). You should be able to see them making bean paste cakes in the window. Carry on through the traffic light to Nezu Shrine on your right. Here you'll find brightly colored orange torii, ancient cedar trees. It also has thousands of azalea bushes and when they bloom in April the crowds are tremendous. Leave the shrine by the gate to your left where you'll see the orange colored torii. Climb the steps and turn right to walk under the torii (mind your head). At the end of this short stroll turn right, down the hill, to the T-junction. Turn left and walk 450 meters to Nezu station to catch the Chiyoda subway line to end your Yanaka tour and take you to your next destination. 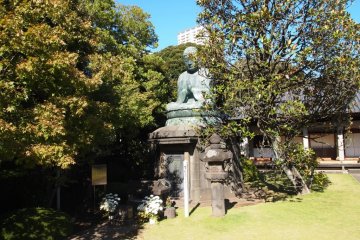 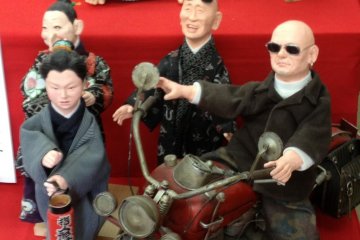 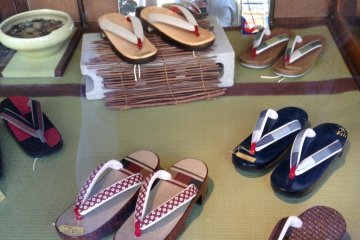