For most people, condoms stopped being amusing around their early teens, when they learnt that they could be used for more than just blowing into balloons.

Some people, however, will find condoms amusing no matter what, and it is from these great minds that we get things like Condomania in Omotesando, just a short walk from Harajuku Station, and Meijijingu-Mae Metro Station.

This store, as its name might suggest, is a store dedicated entirely to selling condoms and condom paraphernalia. From a range of specialty condoms, to condom shaped hats, to novelty phone covers, it really does have everything you could possibly want, as far as condom related items go. My favorite was probably the condoms packaged like lollipops, complete with smiley faces and candy coloring (and the warning on the back “intended for novelty use only”).

Located on a backstreet near Omotesando and Meiji Dori, after relocating from the main intersection – it's just as easy to find as before, with the friendly character outside the store and neon signage.

It’s mostly a novelty store, which means it’s a great place to find inappropriate and ridiculous gifts and souvenirs, like for those odd friends back home and bachelorette parties (penis straws anyone?), but it also means you can pretend to be doing that while actually stocking up on their wide range of flavored, ribbed, studded, special sized or glow in the dark prophylactics and lubricants.

However, the real idea behind the store is to encourage people to be comfortable buying and using condoms to prevent sexually transmitted diseases and unwanted pregnancies by taking a lighthearted approach to the issue.

There is even a series of pictures of condom characters on the walls who remind customers of the importance of condom use, which I think is a great way to share a message which is normally hard to talk about.

As well as the Harajuku store, there is a store in Kobe, and they also have an online store, in case the thought of actually going in to buy your Rilakkuma decorated condoms is too embarrassing.

So for all your condom needs, head to Harajuku and check out Condomania.

A new branch also opened at Shibuya Parco in Nov 2019, as well as another branch in Kobe. 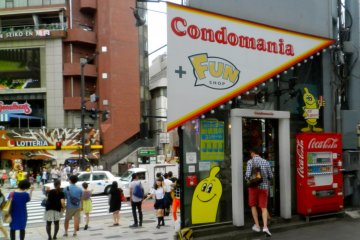 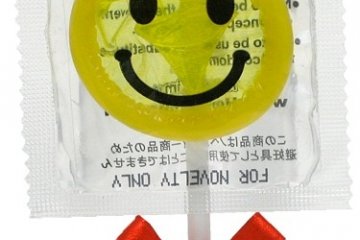 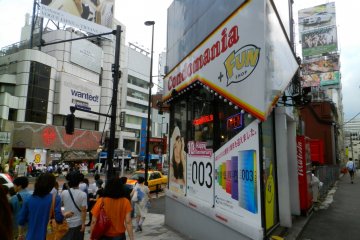