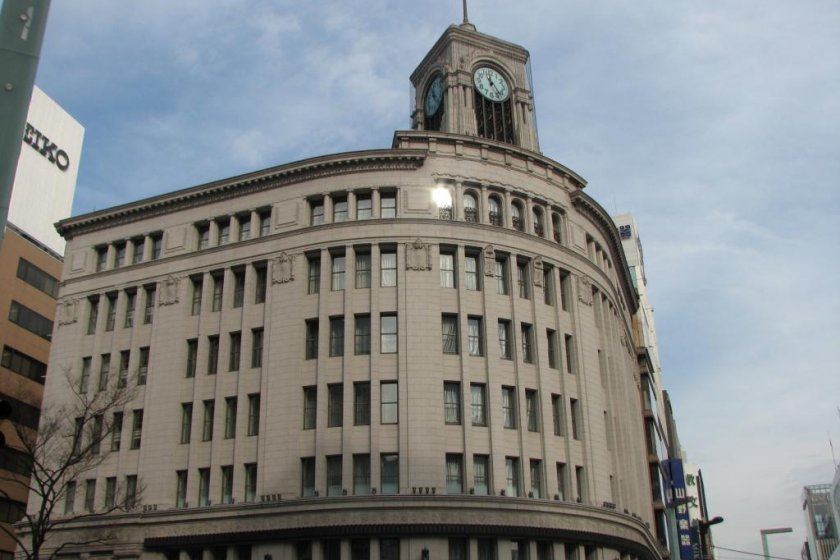 The Ginza and Hibiya neighborhoods of Tokyo are so close to each other that a visitor can walk from one to the other without so much as breaking a sweat, even in the notoriously humid summer.

Ginza is Tokyo's upscale shopping district. It first appeared in Godzilla (1954) as a detailed miniature. The craftsmen at Toho Studios faithfully recreated Ginza well enough to give viewers an idea of how the district looked in 1954.

Across the street from the Wako Building is the Mitsukoshi department store. Mitsukoshi was one of the first Western-style department stores in Japan. It sustained heavy bomb damage in World War II, but has been rebuilt and is still thriving.

Besides Wako, Matsuzakaya and Mitsukoshi, Ginza is also home to the Takashimaya, Seibu, Daimaru, Tobu, Odakyu, Tokyu and Printemps department stores. Apple Computers also has a flagship location on the main thoroughfare.

Besides being an upscale shopping district, Ginza's real estate value is among the highest, if not the highest, in Japan. According to the Old Tokyo website, "Ginza Crossing is still considered to be Tokyo's prime real estate, with prices fetching into the tens of thousands of dollars per square meter!"

From Ginza, Godzilla heads into Hibiya. He approaches the train over-crossing that separates Ginza and Hibiya. He steps on the electrified tracks, and the electrical current coursing though his body causes his tail to whip about, smashing the Toho Nichigeki Theater. Today, the Nichigeki is gone and has been replaced by the Yurakucho Marion Building, which appeared in Return of Godzilla (1984) (released in the U.S. as Godzilla 1985) and in 1991's Godzilla vs King Ghidorah during the opening sequence. The Piccadilly Theaters are housed in the Yurakucho Marion building. Gamera: The Brave (2006) premiered there in April 2006. Toho has a multiplex Nichigeki Theater in the Yurakucho Marion building.

Much of Hibiya consists of commercial office and government buildings. Many of the office buildings are owned and occupied by various departments and subsidiaries of Toho Co., Ltd., the parent company of Godzilla. Toho has a many real estate holdings in Hibiya.

Proceeding west along Harumi-dori Ave. from Ginza Crossing, and passing the Yurakucho Marion Building, a visitor will walk under the train tracks (Yurakucho Station is just around the corner from the Yurakucho Marion) to enter Hibiya. (There is a hamburger restaurant called The Beat Cafe under these tracks. They serve great hamburgers, in case one should get hungry. The Beat Cafe has a rock 'n roll theme.) About a block or two from the tracks is a small side street (the Toho Twin Tower is at one corner) to the left that leads to the Hibiya Chante square where the Godzilla statue stands on a pedestal surrounded by raised-relief hand casts (in metal) of Japanese celebrities. The Godzilla statue is a must-see for fans when visiting Tokyo.

Near the Godzilla statue is the Imperial Hotel. It is a luxurious hotel today, but in the 1956 Americanized version of Godzilla it may not have been if Steve Martin (Raymond Burr) had been able to stay there on a reporter's salary or the United World News expense account.

Hibiya is a movie buff's paradise as there are several theaters clustered in the district.

The Imperial Palace is within easy walking distance, as is Hibiya Park.

Armand Vaquer is the author of "The Monster Movie Fan's Guide To Japan." He has visited Japan eight times researching locations and landmarks used in Japanese science-fiction and fantasy movies and kaiju-related attractions. He has spoken on the subject at Monsterpalooza, G-Fest, Mad Monster Party and Stan Lee's Comikaze Expo conventions and at Distant Lands Travel Bookstore and Outfitters in Pasadena, California. He has his own blog, "Armand's Rancho Del Cielo" and contributes to "Monster Island News." He is an insurance claims examiner and resides in Tarzana, California. 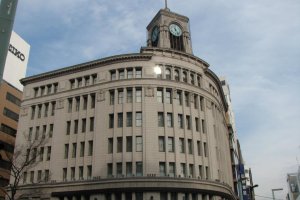 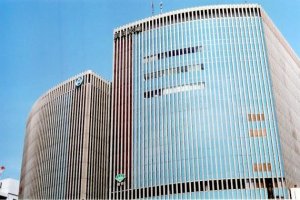 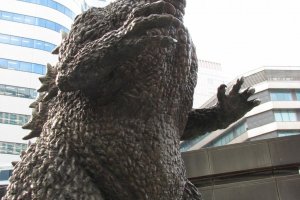 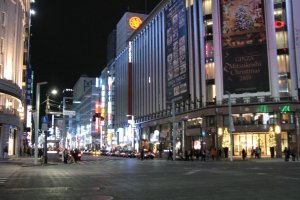 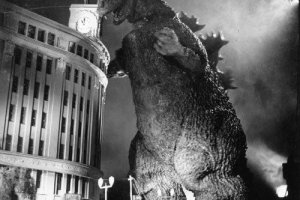 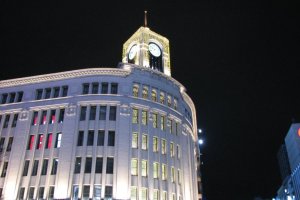