Keith Richards picked up his first guitar when he was about 15 years old. Elvis Presley wanted a bicycle but his parents couldn’t afford one and bought him a guitar instead. John Lennon’s Aunt Mimi famously told him, “The guitar’s all right John, but you’ll never make a living at it.”

Guitars and guitarists, they’re pretty cool, aren’t they? If you think so, then a trip to Ochanomizu is a must-do when you’re in Tokyo. The name Ochanomizu translates as ‘tea water’, and derives from the practice of extracting water from the nearby Kanda River to make the shogun’s tea in the Edo period.

Exiting the JR train station at the Ochanomizu-bashi ticket gate brings you onto Meidai Dori, known colloquially as Guitar Street, which is lined on both sides with guitar shops. The neighborhood is a nice mix of office workers and students. Meiji University is located on the main road, and offices congregate on the backstreets. The famous Mizuno sports company is located nearby.

There are plenty of bargains to be had. If you don’t want to buy new, or if you’re looking for something that’s hard to find outside Japan, then I recommend the Shimokura second-hand guitar shop. You’ll find Morris and Yamaha acoustics alongside Bacchus and Greco electrics. When I visited, they had a very nice Yamaha SG800S on the bench. Japanese guitar companies often kept the best models for themselves. The SG800S, for example, should not be confused with the model released to the United States back in the ‘80s. This model has neck dots and coil taps. How would you like a 30-year old vintage Yamaha for just a few thousand yen? Or perhaps you fancy something more mainstream. Needless to say, there are rows and rows of Martins, Fenders and Gibsons. And don’t be shy about asking for a discount.

One of the most recognizable guitar shops for overseas visitors is Ishibashi Music, thanks mostly to their shop on eBay and English language website. There is more than one branch here, so make sure you walk the entire length of the street, all the way down to the main intersection with Yasukuni Dori.

Don’t be afraid to ask to play the instruments. The old cliché that insists music is a global language actually turns out to be true. I’ve had some passable conversations with staff in English, and I’ve even negotiated good discounts on Martin guitars at Kurosawa music stores. Kurosawa is the main dealer and distributor for Martin guitars in Japan. America’s C.F. Martin & Co is the oldest guitar company in the world, established in 1833. Think of a typical dreadnought acoustic guitar shape. C.F. Martin invented it.

I visited the Big Boss store, where the growling vocals of Yusuke Chiba and his band The Birthday were belting out “Stupid” from one of their earlier albums. Flying V copies were being tried out by star-struck shredders, male and female. If you want to bring back an electric guitar with a bolt-on neck (think Fender), one trick I learned from the Web is to take off the strings, unbolt the neck, and carry it all back in a suitcase. How cool is that?

Tokyo’s self-styled guitar town is full of all the main brands: Fender, Gibson, Gretsch, Rickenbacker, PRS. Naturally, it’s full of starving musicians too, and there is no shortage of cheap places to eat. On the main strip choose from McDonald’s, soba, curry udon and Indian curry. And don’t forget to wander the backstreets too. If you want to treat yourself, try the sushi restaurant closer to the station.

If you need a break and want to listen rather than play, drop in to Disk Union along the side of the station. It’s a chain specializing in used CDs and DVDs. And if all those guitars have made you feel like a rock star there’s a karaoke shop at the Yasukuni Dori end of the strip offering private rooms called karaoke boxes. In fact, why not buy a guitar and bring it along as a prop?

It’s not such a silly idea. After all, the history of popular music has been forged on such childish dreams. Just ask Keef. 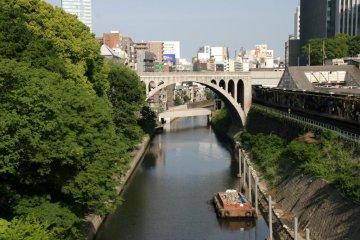 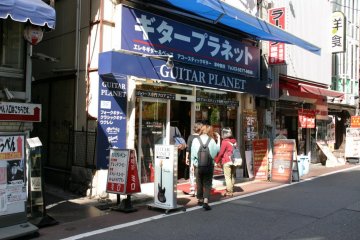 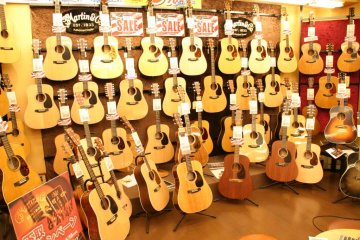 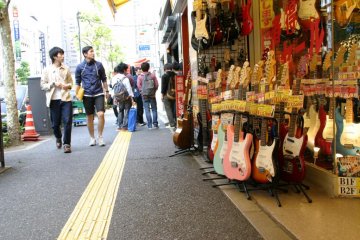 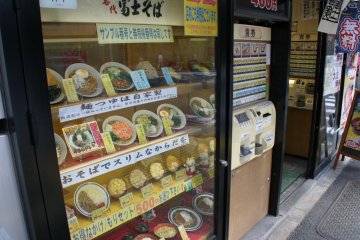 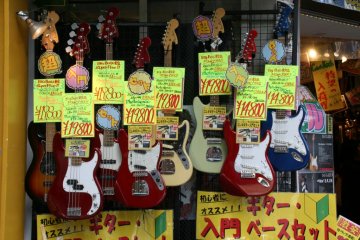 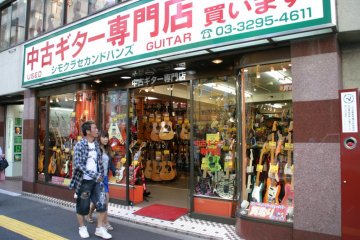 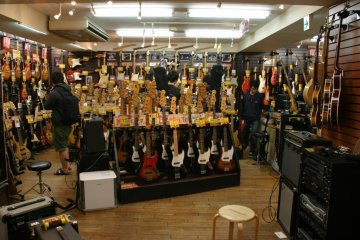 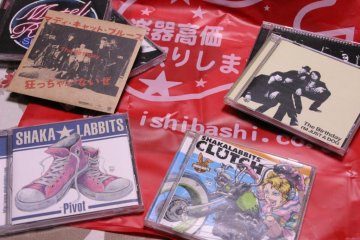 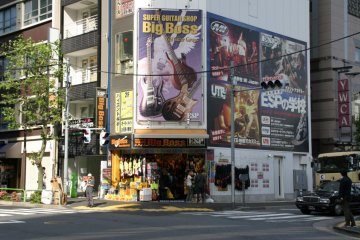 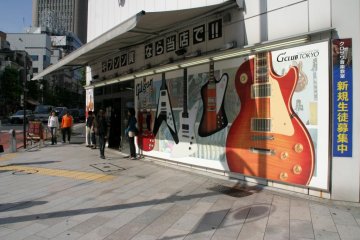