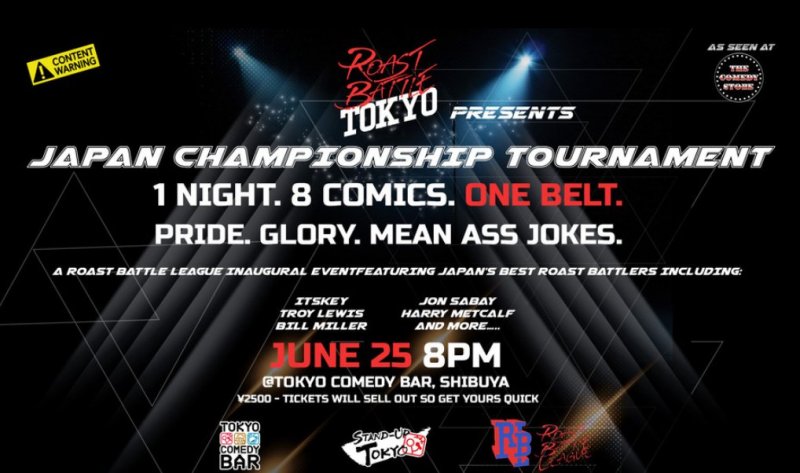 Tokyo's finest comedians face off in a battle of wits

To be held at the new Tokyo Comedy Bar in Shibuya, Roast Battle is the ultimate comedy insult tournament.

Eight of Tokyo's best comedians will go head-to-head on stage in an elimination contest, and at the end of the night, a champion will be crowned!

This show is not for the faint of heart! No holds are barred, nothing is sacred, and the humour is as brutal as it's hilarious.

It may be a safe space for the audience, who get to sit back and enjoy the unfolding carnage, but not for the comedians - even the winners will emerge bloodied and bruised.

For the last five years, every Roast Battle in Tokyo has sold out, and this one will be no exception, so advance tickets are a must.

Tokyo Comedy Bar is on Wave-Dori in Shibuya, next to Mark City, just a minute's walk from Shibuya Crossing or the Keio Inokashira line station.

Doors open at 6:00pm, and the show starts at 8:00pm prompt. Advance tickets cost ¥2,500, and are available through the Tokyo Comedy Bar website.