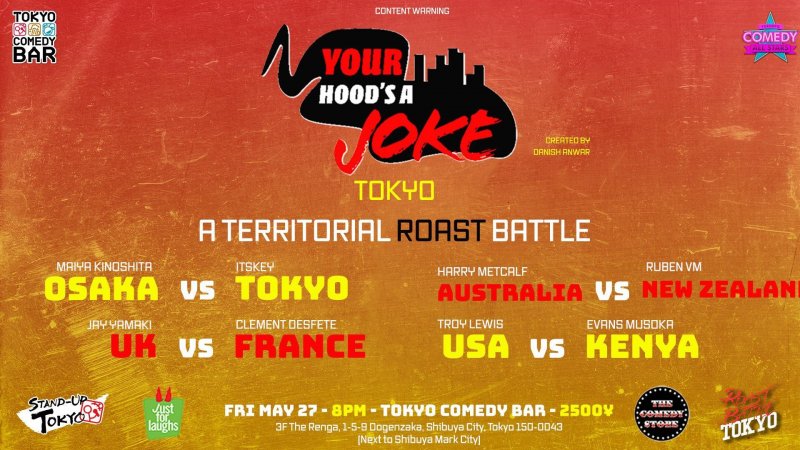 Clash of the Comedians at Tokyo Comedy Bar!

[Update - this show is now sold out]

On Friday 27th May, Roast Battle Tokyo and Stand-Up Tokyo are bringing back Your Hood's a Joke, to be held at the new Tokyo Comedy Bar in Shibuya.

An offshoot of Roast Battle, Your Hood's a Joke is an audience favourite at the Just For Laughs festival in Montreal and at the World Famous Comedy Store (LA), and the previous Tokyo shows have been every bit as epic.

Four pairs of comedians will go head-to-head on stage, representing their country or city in a ferocious battle of wits, but the main winners will be the audience, who get to enjoy the hilarious carnage.

The battles this time are going to be:

Here's an example of the brutal wit you'll get to enjoy:

Tokyo Comedy Bar is on Wave-Dori in Shibuya, next to Mark City, just a minute from Shibuya Crossing or the Inokashira line station. It's a friendly, cosy venue, with shows almost every night, and craft beer on tap, so you can pop in for a drink even if you're not watching a show.