Home away from home

Shinagawa is the Salary man’s Tokyo, being home to Canon, Microsoft and a number of multi-national offices. Swarming with immaculately dressed office workers in their unofficial black and white uniforms, it is like watching worker bees, flowing in and out of the Station on their way their hive of quiet activity. You could almost hear their brains whirling in the background.

Shinagawa is just a 20 minute train ride away from the Sushi Bars at Tsukiji and the upmarket Marunouchi Financial District in Tokyo on the East side, and 10 minutes away from European and American style cafes and boutiques at Harajuku on the West side. Close enough to be convenient, but also far enough not to pay premium tariffs for hotel rooms on prime real estate. The Toyoko Inn Hotel chain probably had that in mind, as they do not have a branch in front of Tokyo and Harajuku stations.

In the Edo period four centuries ago, it took a whole day to travel from Nihonbashi in Tokyo by foot. It was the first town on the long journey from Edo (the old name for Tokyo) and Western Japan for the daimyo (feudal lords), as well as pilgrims and merchants. Known as a post town on the Tokaido Road, it became well known for its inns, tea houses, sake shops, restaurants and pleasure quarters. So it was only natural that the British Consulate was housed in nearby Tosenji in 1859. Further north is Sengakuji, the burial place for the famed 47 ronin (master less samurai) who gave their lives to honor their master. If you head the other direction, you may be delighted by the houseboats along the harbor, called Called Yakatabune, they were popular with the Shogun in the Edo period, and are a great way to see the fireworks during a warm summer evening from Odaiba and other places on the harbor.

Many travelers today will also make Shinagawa the starting point of their journey in Japan, being the closest rail hub to Haneda International Airport, and also being the last Shinkansen (bullet train) station in Tokyo before it winds its way through Yokohama, Nagoya, and Kyoto. Likewise, many salarymen from Osaka and Fukuoka are likely to stay here during a business trip to Tokyo.

Toyoko Inn Shinagawa is just five minutes’ walk from the Western exit of the railway station, perfect if you are lugging your lifetime possessions in your suitcase. Just make sure you don’t get confused with Toyoko Inn Shinagawa Tennozu Isle, which is on the Eastern exit of the station, and a good backup if Shinagawa is fully booked. There is a taxi cab that can take you there from the station, but I doubt if they would want to take you for such a short trip, despite it being an easy 600 yen fare for them. Otherwise you can have your luggage delivered from the airport or your last hotel for a bit more. Toyoko Inn is a no nonsense business hotel chain specializing in providing all the amenities you need with none of the frills. If you are more likely to be out than inside your room during the day, the Toyoko Inn ticks all the boxes. Super clean rooms, pleasant homely beige and striped wallpaper, comfortable but firm beds, a combined bath/shower, complementary Japanese yukata pajamas, in room Wi-Fi, a bar fridge, a writing desk, individually controlled reverse cycle air conditioning, complementary Japanese tea, and some nice touches, like a hot water kettle with a humidifier function, and a TV showing Japanese channels with some English language movies on demand. Being more like a home base, they also have luggage storage and coin operated washing machines and clothes dryers, as well as a trouser press that I still couldn’t work out how to use after so many visits. While the shower head is prone to move when you first turn it on, and you may have a "Bill Murray Lost in Translation shower moment" if you are over 6 feet tall and have to bend over to shower, the water pressure is great and it is always hot.

In the reception area there are a few complementary Internet laptops/PCs, Wi Fi, English and Japanese Newspapers, and a simple but hearty breakfast buffet included in all tariffs each morning, consisting of miso soup, onegiri Japanese rice balls with seaweed or umeboshi plums, croissants, bread rolls, mini sausages, scrambled egg and Japanese style salads, like pasta or potato salad with Japanese mayonnaise. The drinks include Orange Juice, Japanese or English tea and American Coffee. Of course if you prefer to drink something else, or sleep in past nine thirty and miss the breakfast, there are always the vending machines. On the way to the station and under the elevated train tracks, there are numerous hole in the wall izakayas, ramen shops and other down to earth ma and pa eateries, perfect for a quick bite. It is no wonder Shinagawa is known for its bento boxed lunches.

As you sink into that pillow on your first night in Tokyo, probably jet lagged and homesick, think of your fellow traveler five hundred years ago on the long dusty track from Edo to Kyoto, taking in the same miso soup that reinvigorated the tempo of so many travelers. So close your eyes, take a sip and find your tense nerves released by the warm, soothing flavor of this homely soup. It is like the ancients are watching you, the modern day pilgrim being tossed here and there by the tempest of life. 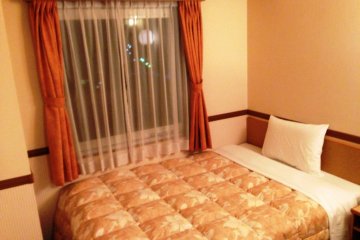 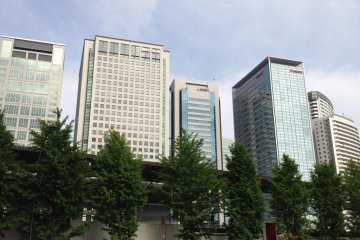 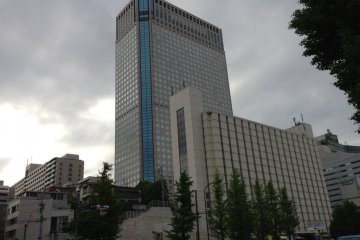 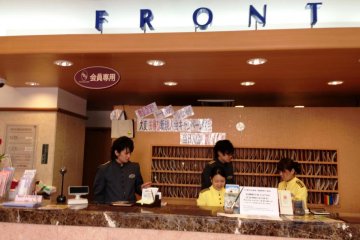 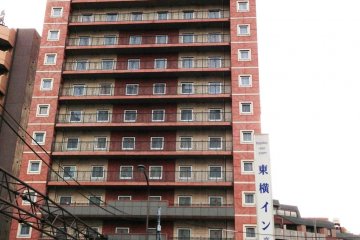