Yanaka Ginza is a famous traditional shopping street located in the Yanesen area of Tokyo. The names of three connected areas, Yanaka, Nezu and Sendagi are collectively called Yanesen.

If you wish to get a taste and experience of the Edo period Yanaka Ginza is sure to delight you. On the street and in the immediate area you can get some of the most reasonably prices Japanese delicacies in Tokyo.

Aside from the great food and drink the street is a favorite place for locals to buy their groceries from the variety of shops selling fresh vegetables, meat and fish. It is a favorite place for travelers to pick up gifts at the uniquely Japanese souvenir shops or Omiyageya. On weekdays the same offerings are available but the street is not quite as busy and less crowded.

Historically in the Edo period in 1657 a giant fire known as the Meireki no taika or Furisode Fire destroyed much of Tokyo. Many temples in the neighboring Kanda area were also destroyed. As a result, during the renewal of the city the temples were moved to the area.

The craftsmen and artisans who assisted in the relocation and construction populated the area. Their influence remains in the area today in small galleries, wood carvings and the street painters. There is a greater concentration of shrines and temples in this area than any other part of Tokyo.

Tokyo again experienced great damage from the Great Kanto Earthquake in 1923 and in World War II but miraculously there was very little damage to the area of Yanaka. This adds to the legend of it being a charmed area that is popular and well respected by the people of Tokyo.

Comparable to many of the super fast paced areas of Tokyo the sights, tastes and smells will delight your senses. The people in the area are relaxed and friendly creating a casual, welcoming, laid back, atmosphere.

Yanaka Ginza can be reached in about a five minute walk from JR Nippori station or the Sendagi Tokyo Metro station. The street is painted a bright orange so it is easy to find. 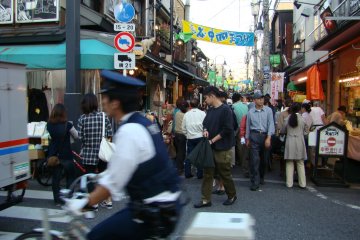 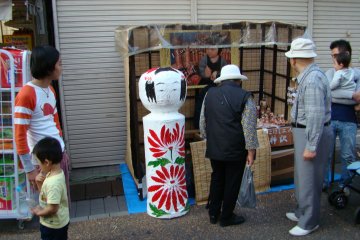 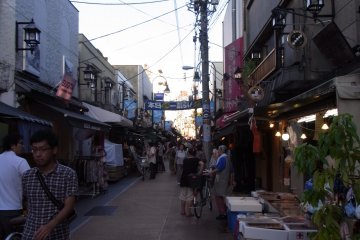