The best swimming holes in Japan

Looking for a little piece of paradise? With a population of less than 600,000 people, Tottori is the least populated prefecture in all of Japan and also one of the most remote. The combination of a small population and a remote location means that Tottori and its coastline are largely unsullied by man and our pollution. Nowhere is this more apparent than the Uradome Kaigan, the rocky, mountainous stretch of coastline just a few kilometers east of the well known Tottori Sand Dunes. The many rock varieties in Uradome Coastline’s cliffs earned it a National Geo Park distinction for its scientific significance. The incredible geography both above and below the sea, and the stunningly clear blue water (up to 25m of clarity on a good day) earned the 9.8 hectares of sea floor between Tajiri and Iwamoto/Otani fishing villages the status of a National Marine Park. I had seen pictures of the rock formations and the water in a travel brochure, but I was still unprepared for the grandeur of the real thing. Friends and colleagues still gawp and say, “That can’t be Japan,” when I show them my pictures.

It was the height of summer beach season when I made my visit, but despite plenty of buses  from Tottori Station and a train station just a kilometer away, I only had to share Uradome Beach, the start of the Uradome Kaigan Walking/Hiking Trail, with about 20 other people. Uradome Beach was also one of the two cleanest beaches I’ve seen in Japan (the other being Higashi Hama a bit father to the east). I didn’t see a single piece of trash anywhere on Uradome’s white sand. After a quick dip to wash away the morning heat, I headed west through the port of Tajiri and onto the cliffs paralleling the Sea of Japan. The black rock spire of Kuroshima Island was the only thing interrupting my view of the Sea of Japan, which stretched away toward the horizon where it blended, almost seamlessly into the sky. After walking a bit further west along the road and the hiking trail I spotted Natane Island, a rock formation I’d seen in the travel brochures. I also spotted the beach next to it and the people playing on it (that wasn’t in the brochure). A wooden boardwalk of a trail led me down through the forest, past a couple of places where people had pitched tents, to the pebble beach and the clearest water I’ve ever seen. After another swim that took me around Natane Island and the 2 coves nearest it, I continued my hike.

I spent the rest of the day hiking and swimming in the many coves and beaches along the coast, I had some of these swimming holes all to myself, I met a few other people during my hike but for the most part, I was kept company by the cicadas and the dragon flies. After finishing off my hike I took the bus and the train over to Higashi Hama Beach, the easternmost point in Tottori Prefecture. I’d seen some people riding longboards in the waves a few days past and wanted to see if I could have a go at that too. White sand, blue water and a complete lack of trash greeted me here too. A group of about 10 people were doing their own thing at one end of the beach, but everything else was mine. That I didn’t have a girlfriend to share the beach with, and indeed the whole coastline, was my one regret. A more romantic getaway would be hard to come across.

The Uradome Coastline is accessible via the San’in Line, get off at Iwami Station and then walk 1km to Uradome Beach or take the bus to “Uradome Kaikan Guchi” to access the western end of the trail. The western terminus of the trail is nearest the “Ajiro Josei Kaikan Mae” bus stop in the village of Ajiro near Ajiro-Ko, get a bus heading in that direction from Tottori Station or from any of the bus stops near the sand dunes. Higashi Hama Beach is a very short walk from Higashi Hama Station on the San’in Line. I’ve not found a better place for swimming in Japan, if you find one though, I wanna know about it. Happy travels! 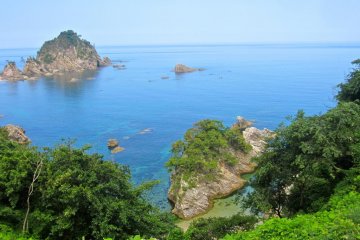 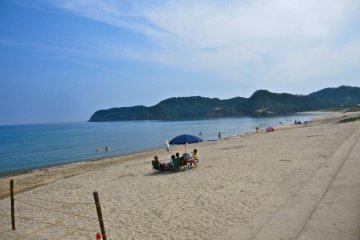 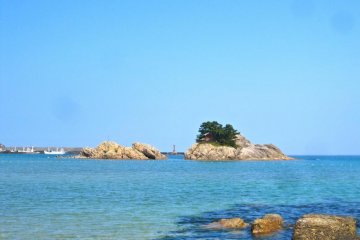 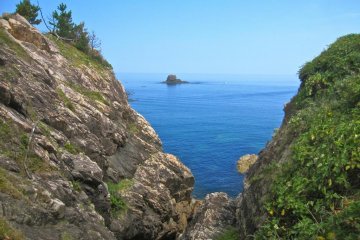 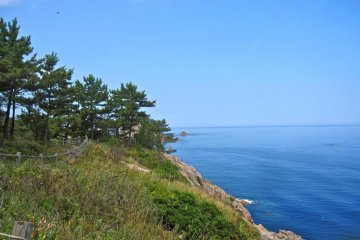 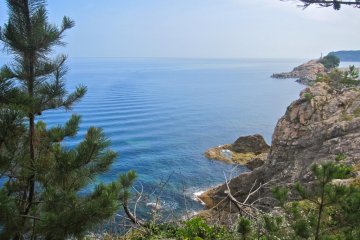 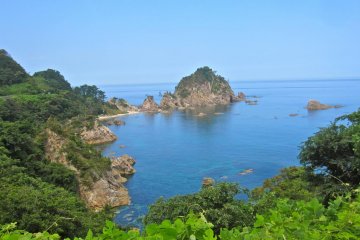 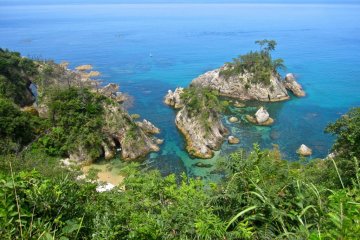 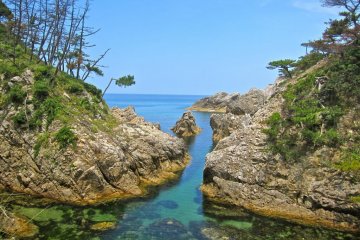 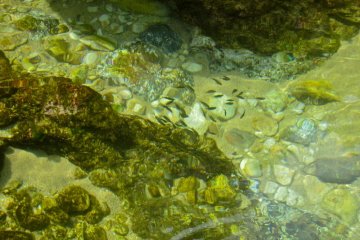 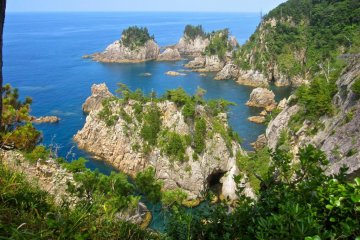 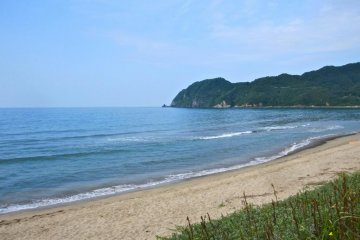