A Visit to the Kushigaki Village of Katsuragi

Dried sweet persimmons on a skewer for New Year’s celebration

In Search of the Kushigaki Village

The “Katsuragi-cho Shiki-no-kai (四喜の会)” is a volunteer guide group in the Katsuragi area whose members are so-called kataribe, “story tellers”. They called their group “The Four Happiness Association” from Yorokobu in Japanese.

These guides take visitors to some villages in the Katsuragi area of Wakayama Prefecture where famers have specialized in growing kaki (persimmon). Actually, they not only grow them but they also pick the fruits, peel them and dry them to make Kushigaki, the specialty of this area.

We are in the “Kushigaki Village” that are actually made up of four settlements in the Katsuragi Mountains, an area that straddles the borders of Wakayama, Nara and Osaka Prefectures in the Kansai region of Japan.

These four settlements are Taira, Higashitani, Hirokuchi and Taki. They are sparsely populated but you find many fruit orchards where kaki is grown. The farmers here have specialized in growing kaki over generation.

We went to the Kushigaki Village with Mr. Tsuchimoto, a guide from the Katsuragi-cho Shiki-no-kai who showed us around in one of the villages and explained about Kaki. Not many visitors come here, he tells us, but those who come are repeat visitors.

We were able to meet some of the farmers there and watch how they peel the persimmons, put them on skewers and hang them up in rows to dry outside for one month in the sun and wind.

This is down to the micro climate here that lends itself to drying Kaki well. Neighboring Nara Prefecture, where persimmon is also grown, for example, does not have the mild temperature, the sunshine and the unkai, a mist that hangs over the valley in the morning, that all contributes to letting the kaki get dry and sweet.

Kaki is picked from the trees that are kept low so that the farmers can easily reach the fruits. They use ladders or climb up on the tree branches and cut the fruits with a scissor. Over the next two days the picked kaki will be sorted, the leaves removed by hand, then the fruits get peeled. Next the peeled fruits are put on a skewer and these skewers are hung up outside.

Like everywhere in the Japanese countryside, there are not enough young people here to help on the kaki orchards. We are told that in the 1960s, there were still 450 families here that grew kaki and produced Kushigaki. Now there are only 100 left!

A box-like mechanical devise or a machine are used to peel the persimmon now but before it was all done by hand. The “peeling box” was just introduced 50 years ago and the peeling machine even more recently.

The peeling of kaki, or kawa-muki in Japanese, is now offered as a taiken, an experience that visitors can engage in.

We first watched an 80 years old woman who demonstrated to us how to do it properly. She also told us that she has been peeling persimmon since she was three years old! Can you believe that she peels 1,000 fruits with this peeling box per day? She is working from 6am to 10pm do get to 1,000 fruits…

Origin of Kushigaki for New Year

Kushigaki is a Japanese New Year’s decoration now but the dried fruits were also eaten in former days. The famers bring the Kaki skewers to the market on the same day each year, namely on December 15, just in time for the “Kushigaki Market”, a kind of whole-sale market, to open on December 20.

The Mayor of Katsuragi Town is always present on this day when the price for this season’s Kushigaki is fixed and the sale of Kushigaki begins in time for the preparations for New Year. One skewer with ten fruits typically costs 500 Yen.

Kushigaki for New Year was introduced by warlord Toyotomi Hideyoshi in the 16th century. He was known to be a heavy drinker of sake who would have a double-load of sake for New Year. To get sober quickly, he had a few tricks. One was to eat kaki because persimmon is known to be a hangover remedy. Kushigaki from Katsuragi were offered to him at his stronghold in Osaka and since then it was decided that Kushigaki are part of the New Year’s Celebrations in Kansai.

You probably know the “Kagami Mochi” (Mirror Rice Cake), which is a typical decoration for New Year in Japan. It nowadays consists of two mochi, one at the bottom and one in the middle, and a mikan, a satsuma mandarin, on top.

The farmers in Katsuragi told me that traditionally they have two mochi at the bottom, which stands for a mirror, a Kushigaki in the middle, which stands for a sword, and a Daidai (an old type of mikan fruit) on top, which stands for a jewel. Do you know that the mirror, the sword and the jewel are the Imperial Regalia of the Emperor of Japan? These three items also have a deep meaning: valor, wisdom and benevolence.

Now the Kushigaki are also used as a New Year’s decoration in their own right. 10 fruits are put on a skewer in a pattern that follows the 2-6-2 principle. Two kakis together in Japanese means ni-ko (literally two fruits) but in another reading “nikoniko” means to smile happily. A white powdery dust develops on the Kaki when they are dried. It means growing old together.

In the Taisho Era (1920 and 30s) of Japanese history Kushigaki were offered to the deities of the Kumano Sanzan, the Three Grand Shrines of Kumano. Since then Kumano and Katsuragi have friendly relations.

So, the meaning of the Kushigaki as a whole is “fuku” (福): to smile together, be well and happy, have good relations and grow old together. Get one of these Kaki skewers from Katsuragi coming December and your good luck and happiness for years to come is ensured!

Access is easiest by car, either rent-a-car, or your own. Drive on the Keinawa Expressway (E24), exit Katsuragi Nishi, then Road 480. E24 connects with E26 to Osaka and E42 to Wakayama City. For a slower drive, follow National Road 24 from Wakayama City in direction of Hashimoto City. The nearest train stations are JR Kaseda, JR Otani and JR Myoji on the Wakayama Line. 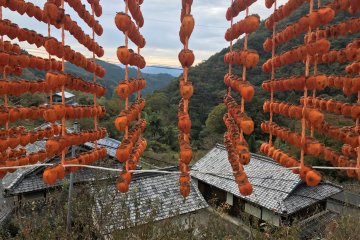 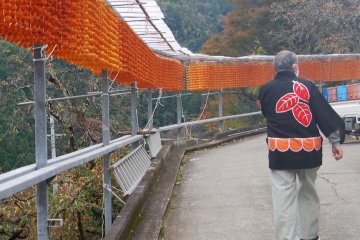 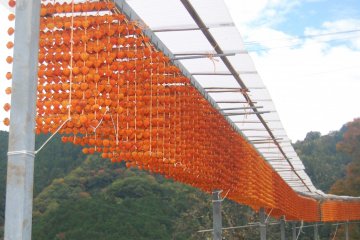 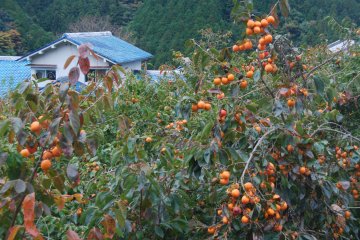 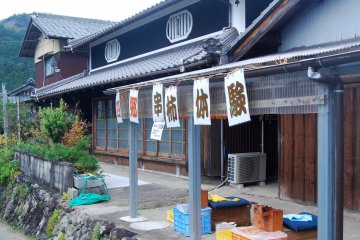 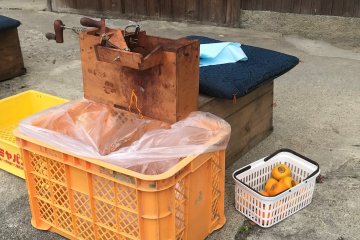 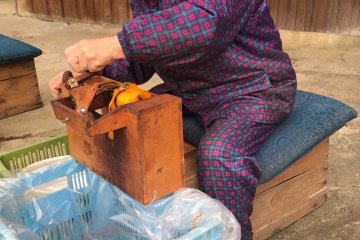 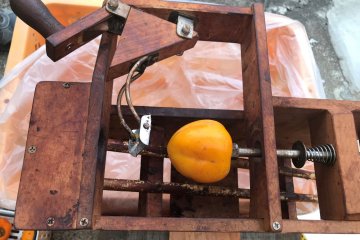 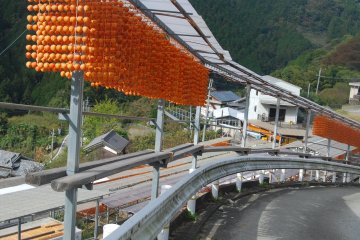 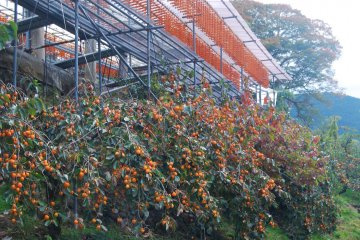 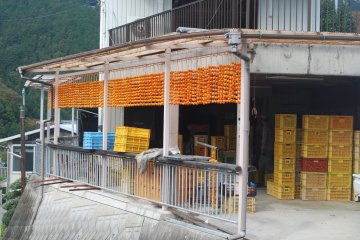 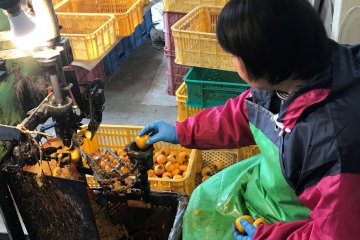 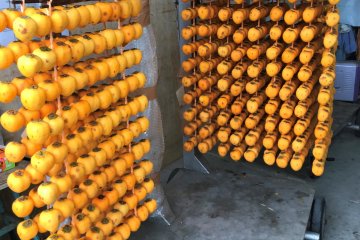 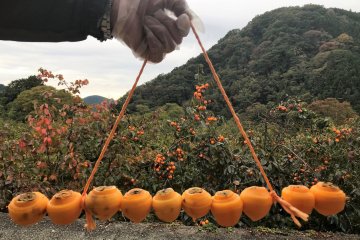 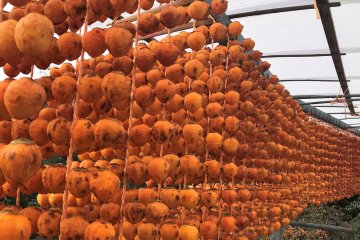