Discover tales of pilgrims along the ancient route

Follow into the footsteps and discover the tales of pilgrims along the ancient Nakahechi pilgrimage trail in Kumano.

Takijiri-oji shrine marks the beginning of the Nakahechi trail, one of several old pilgrimage trails that crisscross the Kii Peninsula. Takijiri-oji is considered to be the point where “the passage into the precincts of the sacred mountains begins.”

It is the starting point for a 40km hike, or pilgrimage whichever you prefer, along the Nakahechi trail.

The beautiful mountain landscape of Kumano, its rich cultural heritage and spiritual atmosphere make for a unique mix that gives you a taste of the “real Japan”.

Some souvenir shops clustered near the Takijiri-oji shrine’s gate provide all that is needed for wannabe pilgrims and hikers in Japan: trail maps, food and drink supplies and the necessary pilgrim’s outfit - a straw hat and a staff.

The trailhead of the Nakahechi course is right next to Takijiri-oji shrine where some stone steps lead up and into the mountains.

Pilgrims are faced with a steep ascent for the first few kilometers, which is enough to put any weary soul off at this early stage. This gives a taste of what is to come but nowadays we only experience a fraction of the hardships that pilgrims in the old days must have endured.

A conical straw hat and a wooden walking staff are part of the traditional outfit of pilgrims in Japan.

I was reluctant at first to get decked in with what I thought was tourist drapery. The shopkeeper, an elderly Japanese man, asked me whether I had come to the area on a sightseeing trip and I explain that what I was after was looking inside as well as gazing at the scenery around me. He looked at me curiously and then got me a hat and a staff. I was sceptical at first but then a funny thought crossed my mind: maybe it is easier for the kami-sama and hotoke-sama, the Japanese Shinto and Buddhist deities, to keep a watchful eye on foreigners wandering around in the Japanese forests if they wear a recognizable hat?

I purchased the hat and staff, both of which are inexpensive and also make nice souvenirs. I have to admit that they also turned out very handy.

The hat sheltered me from gushing rain. Pilgrims’ purification these days is most likely to come from above: Wakayama is known for its high rainfall probability.

The staff helped me up and down the mountains, sensing out the trail ahead of me and fighting off spider webs. Stepping over rocks and roots, its cling-clang alarmed the forest’s inhabitants of my coming so that I only saw the rear of a deer, a badger and a snake while birds and bees did not seem to be bothered by my presence at all.

While this is considered to be the “easiest” of all Kumano Kodo trails, proper planning and equipment are absolutely necessary.

Traditionally, some milestones, called Ichirizuka, showed the way and a number of them can still be seen along the Nakahechi trail. 1 ri, an old Japanese measure for distances, is roughly 2.44 miles. However, orientation is now easier, especially for foreigners.

Some wooden signposts in Japanese and in English clearly mark the trail. From post No. 1 at Takijiri-oji to post No. 75 at Hongu Taisha, the Hongu Grand Shrine, it is roughly a 40km walk up and down the hilly trail.

On the first day, I walked from Takijiri-oji to Chikatsuyu-oji (13km, roughly a 5hr walk) and on the second day I continued from Chikatsuyu-oji all the way to the Hongu Grand Shrine (Hongu Taisha) located next to the Kumano River (25km, roughly a 7.30hr walk).

You can take a local bus from Kii-Tanabe Station to get to Takijiri-oji but many Japanese tourists arrive by car or by tour bus.

While you might want to walk the whole trail, many visitors to this area typically only walk parts of it before they hop into their vehicles again and zoom off to the next attraction in the Kumano land. This is good for you as it means that there are not many people on the trail ensuring an undisturbed and peaceful walk. 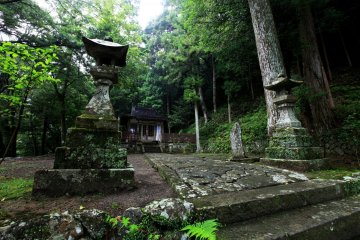 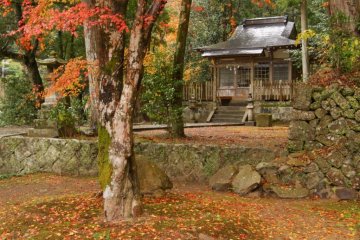