Practitioners of aikido will have heard of Tanabe, the second biggest city in Wakayama Prefecture.

Morihei Ueshiba (1883-1969) founder of the Japanese martial art of aikido, respectfully referred as O-Sensei (“Grand Teacher”), was born there.

Tanabe people are proud of their aikido heritage but this is not the only reason to stop by at this seaside town surrounded by lush green mountains.

Tanabe is a convenient access point to the Kumano Kodo (“Kumano Old Road”), a network of pilgrimage trails that cross-cross the southern part of the Kii-Peninsula.

Aikido is considered to be the youngest of Japan’s modern martial arts as it was only developed in the early 20th century by Morihei Ueshiba (1883-1969) from techniques of ju-jitsu, an ancient Japanese martial arts style. Until his death in 1969 Ueshiba trained four generations of students, many of whom later set up their own aikido schools, for example, Shioda Gozo Shioda (1915–1994) founder of Yoshinkan Aikido.

Many aikido techniques are actually based on sword-fighting techniques and akidoka, practitioners of aikido, learn to move like an “empty-handed swordsman”. In order to better study the correct moves, they often use a bokken (a wooden practice sword).

While the kihon (basic) techniques do not use weapons, advanced practitioners might train with the jo (a short staff) and other weapons. Generally aikido is not a competitive sport like kendo or judo and there are no competitions. Instead, practitioners show their skills at Embu, annual demonstrations.

Visitors to Tanabe are encouraged to explore the city on bicycle. The Nanki Tanabe Tourist Information Center next to Kii-Tanabe Station provides an audio guide in English that help visitors to navigate Tanabe City’s interesting spots.

This “Machi-Navi Audio Guide” (City Navigation Guide) explains about the history and culture of Tanabe as well as about Japanese culture, history and religion.

The explanations are very entertaining and you will learn a great deal about many aspects of Japanese culture. Two of Tanabe’s most famous citizen, Morihei Ueshiba and Benkei, also feature in the audio guide’s detailed explanations.

Morihei Ueshiba was born here and the place where his parents’ house once stood is still there, although it is an empty lot know. To jog your imagination of how this man small in size became a world-famous aikido master, visit the Morihei Ueshiba’s Bronze Statue in a small park near Tanabe’s Ogigahama (“Ogigahama Beach”). This statue was built on the occasion of the 5thWorld Congress of the Aikido Federation in 1988.

You will find Ueshiba’s grave on a small mountain just outside the city center, which is also the location of Kozan-ji Temple. This is a temple of the Shingon branch of Japanese Buddhism, whose center is on Koyasan, a mountain monastery in the north of Wakayama Prefecture.

While Ueshiba developed aikido to be a defensive form of martial arts, Benkei-another famous Tanabe citizen-used his skills in feudal clan warfare of the 12thcentury. He was a warrior monk said to have been born in Tanabe and there are many legends around him. His impressive statue can be found near Kii-Tanabe Station.

In fact, there is another Benkei Statue on the grounds of Tokei-jinja Shrine that shows Benkei standing next to his father Tanzo. Benkei has its own matsuri (“festival”) named after him-the Benkei Matsuri- which takes place in Tanabe each year in October. Come to Tanabe to enjoy the fun and frolics of this yosakoi, a Japanese dance festival.

The “ Machi-Navi Audio Guide” can be rented for yen 200 for a whole day but it will take you only a couple of hours to complete the whole course and on bicycle you are even faster.

Rental hours of the audio guide are from 10:00 to 15:00 and the audio guide must be returned by 17:00 at the latest. If you arrived by train, and you are the holder of a valid JR train ticket, then you may rent your bicycle at Kii-Tanabe Station.

Those of you who prefer spending their money on ice cream or beer may download the 23 MP3 files, either all or selected files, from the Tanabe City Kumano Tourism Bureau website for free and walk the courses of 3.7km or 7.1km respectively.

If you are not into martial artist’s and warrior monk’s stories, then make Tanabe your base for a hike along the Nakahechi, one of the Kumano Kodo routes. A bus will take you from Kii-Tanabe Station to Takajiri-oji, which is the entrance point to the Nakahechi old pilgrimage trail.

Alternatively, hang out at Tanabe’s very own city beach- Ogigahama. 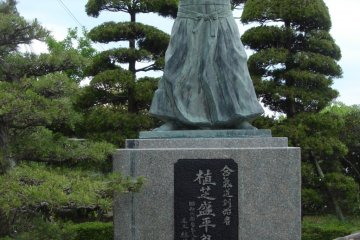 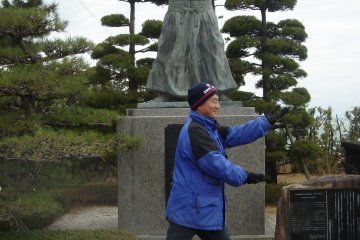 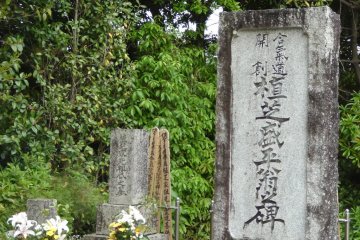 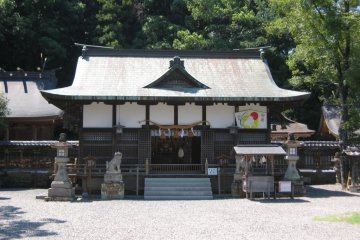