Kaminoyama Onsen south of Yamagata City is not far from Zao Onsen and its legendary snow monsters. The ski slopes here are not nearly as famous as those of the Zao Ski Resort, but Kaminoyama has a stop on the Yamagata Shinkansen line, and Zao hasn't.

It is said that the origin of Kaminoyama goes back to the 15th century when the hot springs were discovered by a monk. It is a legend that is quite common in Japan: an injured bird, in Kaminoyama it was a crane, soaked its wounds in the hot springs. Somebody, here the monk, noticed and thereby found the healing waters.

I stayed here several years ago when all accommodations at Zao Onsen, such as the Zao Shiko Hotel, were booked out. It was around the time of the Zao Snow Monster Festival, a very popular event held on the slopes of Zao Ski Resort. Kaminoyama is located at the base of the Zao mountain range and two roads run from Kaminoyama to Zao.

The majority of inns are located in the center of town around Shimo Oyu, one of two onsen areas in Kaminoyama. The other onsen area is Hayama Onsen 3.5km to the southwest of Kaminoyama.

Kaminoyama has no major sights. Well, that is if you don't count a ryokan as a sight to visit because Koyo Ryokan has a long history and it has a museum. Both are related to rakuyaki, a type of Japanese pottery. The inn was built on the site of a former kiln and Koyo means old kiln.

The remains of the kiln are still preserved, and they now serve as a shrine. Koyo holds several thousand rakuyaki plates that were decorated by famous people. In the hotel museum a collection of several hundred plates is on display. Actually you can decorate a plate too, if you like. A fee is charged for this activity.

In fact, Koyo Ryokan, located in the Hayama Onsen area, is famous! The inn ranks top amongst onsen ryokan in Japan. Being famous comes at a price!

The good news for those on a smaller budget is that you can also buy a "day time plan" which allows you to use the onsen at Koyo and have a meal there. You even get assigned a room where you can leave your luggage and rest for a bit. You have max. 4.5 hours to enjoy it all.

This is the only way to get into the onsen of this famous ryokan as a day guest. It still costs you yen 7,000 (with the meal) while at other inns in Kaminoyama you are allowed to have a bath during the day as a non-staying guest for just yen 1,000.

With all that samurai heritage it doesn't come as a surprise then, that the locals claim to know a bit about "samurai cuisine". Owano-san at Orizuru Cafe is a specialist in samurai cuisine, although I just had a plate for common folks when I went there.

But back to Koyo where the meals are divine, whether you stay there overnight or just during the day. Meals can be served at a regular table with chairs, or at a low table sitting on low chairs. Some meals include the famous Yonezawa wagyu, a Japanese high grade beef. You can order Yonezawa wagyu steak or Yonezawa wagyu sukiyaki. Koyo caters to all tastes and offers Japanese-style and Western-style meals. It is famous for its Teppan-yaki dishes.

Koyo is a large inn and rooms have 2 or 4 beds or are family rooms. The hot spring facilities are large too with a range of bath tubes, both inside and outside. Some are located on the first floor and some others on the 8th floor from where you have a panoramic view of the Zao mountain range. Of course, they have a sauna and massage services too.

Your best option, if you have spare cash, is to rent a room with a semi-open-air or an open-air hot spring bath. All guest rooms with a hot spring bath by the room were renewed in 2019.

With all the superb service at Koyo, you don't need to go out to visit some sights but you can spend the whole day at the ryokan!

Kaminoyama Onsen is a station along the JR Yamagata Shinkansen. There are hourly train connections to/from Tokyo. Depending on your reservation status, the inn's shuttle bus can pick you up. 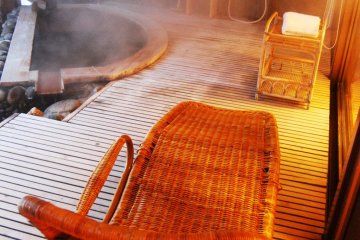 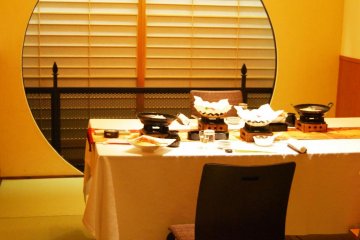 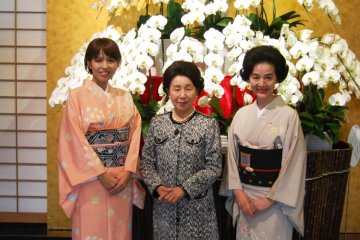