Zao Onsen - Realm of the Juhyo

Roam among the looming snow monsters of the Japan Alps

Mount Zao Onsen and ski resort is reportedly one of the best places for skiing in Japan and from looking at it, I believe it. There are a huge number of lifts and cable cars which look awesome, and operate on a hands free smart card thing, and the snow looked very good and powdery. There were a huge number of cafes dotted about, and at the end of the day you can soak in an onsen until you can feel your toes again, so I think it must be a very good place to ski/snowboard.

My hotel is an alpine chalet that is half way up the mountain. When I arrived I had to get a cable car and then drag my bag up a steep ski slope, collecting a huge wake of snow rucked up behind it, dodging skiers and Snowboarders all the while. I thought that for once my “I will walk anywhere and everywhere!” plan was beginning looking a little foolish and I wasn't even sure I was heading in the right direction – I swear I have never been so glad to hear blaring yodeling music in my life!

It’s a weird place; the people are very nice and helpful, but it feels a little like being at summer camp or something – you are told when to get up, bathe, get back, eat etc. and even when to go to bed. Most of the other guests are teenagers/students in big groups on ski breaks so I guess this has to be the way or chaos would reign.

The main reason I am here however, is for the Juhyo; which are where the pine trees become covered in snow such that you cannot see any of the green any more and they become “snow monsters”. These are at the very top of the mountain, where the moisture in the air becomes flash frozen to every surface, and you have to ride two cable cars up to reach them. They morph into huge towering shapes, some that resemble animals or structures and you can wander among them in knee deep snow. You only need to go a few meters back from the ski slope path way to lose sight of it completely and even sounds become extremely muted, so often you only have your deep footprints to help you get back. The Juhyo themselves are spectacular and ethereal, stunningly white and in such a variety of strange and sinuous shapes that they seem to be a horde of individual mystical creatures, standing silently on the mountain top. It is very hard not to be moved by their imposing presence.

From the top cable car station you can look down on all the slopes, Zao Onsen town and the valley beyond – opposite there are the other mountain ranges that make up the spine of Japan stretching off in to the distance. I think that the view from the top is one of the best natural panoramas I have seen and is definitely what the word ‘vista’ was invented for. I have taken a huge amount of photos but I feel that they don’t really do it justice, as the layer upon layer of snow capped mountains that stretch off into the horizon are very hard the for camera to make out, especially on such a bright day as it was today. In fact, I have sun burn in -4° degree weather due to the glare off the snow, and a few times I nearly fell over when I came into a cable car station as the sudden darkness leaves you quite disoriented.

Quite a few places in Japan I have traveled to thinking “Hmmm, I wonder if this is going to be worth it, I am only here to see one thing; what if it isn’t very good? Then I will have wasted 2 days…” and every single time I been totally unfounded in my doubts, every single one of the places has been enjoyable and rewarding, and has proved its self worth it admirably, either for scenery or natural phenomena unique to the area or even just the hotel I stayed in.

I think that Zao however wins the award for going from the most “Oh you gotta be kidding me, that miles away!” to “Oh my god! That’s amazing!” in the most stunning fashion. I went from spending 30 mins dragging my bag through the snow with frozen feet to arrive at a hotel and be ordered into the bath with 3 other girls, to the next morning standing on the top of a mountain with frozen feet thinking I could happily stay there all day. 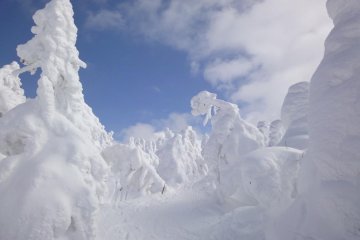 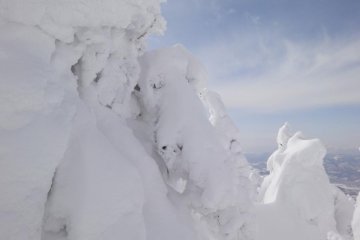 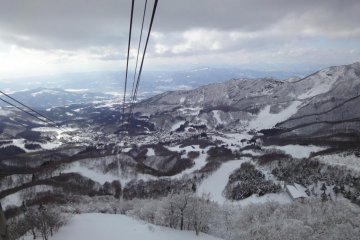