Staying at a temple overnight?

This is an option at Mount Haguro, one of the Dewa Sanzan, the Three Mountains of Dewa in Yamagata Prefecture.

Mingle with Japanese pilgrims, sleep in a traditional tatami room, try shojin ryori, a vegetarian cuisine eaten by Buddhist monks, and attend the monks’ prayer ceremony in the morning.

Temples where you can stay overnight are called shukubo, or temple lodgings in Japanese. They are first and foremost for Japanese pilgrims who make their way to some holy sites to venerate Buddhist deities or kami-sama, the many gods of the Shinto pantheon. However, non-pilgrims and foreigners are also welcome in many shukubo nowadays.

Toge Village, the starting point for a strenuous hike up the stone steps of Mount Haguro, is traditionally a base for pilgrims who come to venerate the deities of Dewa Sanzan. In Toge you will find many temple lodgings.

They serve shojin ryori (a vegetarian cuisine eaten by monks) for dinner and breakfast.

Shojin ryori does not contain any meat or fish due to the Buddhist concept not to kill any animals. Once you get your head round to not having a toast and a coffee for breakfast, you will enjoy the delights of this very simple yet utterly healthy food. It typically consists of vegetables in vinegar, wild vegetables, tempura and tofu.

Guests typically arrive around 4pm or 5pm at the shukubo. You are greeted with a cup of green tea and some Japanese sweets and you are invited to relax and take a bath before dinner is served at around 6pm.

The rooms feature tatami mats and you will sleep on the ground on a futon which will be laid out for you while you eat your dinner. A sliding door leads you into your room and rooms are separated by thin wooden walls like in traditional Japanese houses. This is not a place for a late night drinking party but you are reminded to respect the temple etiquette.

After dinner there is not much to do except for having an evening stroll through Toge Village but don’t expect many people around. Different from big cities like Tokyo and Osaka, sleeping time comes early in the Japanese countryside.

The morning starts with a Buddhist prayer ceremony that all pilgrims will attend and guests are invited to join as well. This will take place around 6am and you might think that you don’t want to get up that early.

However, this is a rare chance to observe the monks’ morning ceremony. Breakfast will be served around 7am and people typically check out soon after.

Toge is the perfect place to stay overnight in the Mount Haguro area: you are close to the entrance gate to Mount Haguro and you can look forward to sumptuous vegetarian meals for dinner and breakfast before tackling the Ishi-dan, a stone path of 2,466 steps leading up to the summit through a forest of very old cedar trees.

Mount Haguro even got two stars in the “Green Michelin”, a Japan guidebook published by the Michelin team! 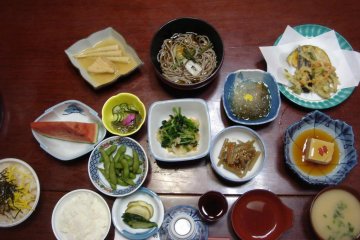 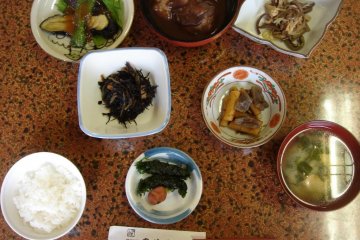 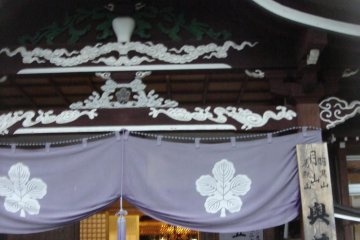