Beautiful weather and sights make for a good cycle day

Having had every intention to head to the Fuji Shibazakura Festival in the Fuji Five Lake region to see a medley of pink flowers (I had to see some of Japan's floral prowess after having missed the cherry blossom season entirely), I woke up at a godforsaken time of 5.30am just to trek nearly 2.5 hours to Kawaguchiko Station. One can only imagine my disappointment when the event staff told me that the flowers had only partially bloomed. "10 to 20 percent, only!" she quipped sympathetically. Well, I definitely wasn't going to pay 1900 yen for a round trip ticket and admission fee just to see pink bulbs of nothing, so I decided on what I hoped might be the next best thing: having a cycle around Lake Kawaguchiko.

Renting a bicycle from Ebisuya, a restaurant/car rental place near the station, I paid my 1500 yen for the day's rental and set out, the cotton-wool cloud filled skies an indicator of the brilliant day ahead. Within 10 minutes of starting out, I found myself nestled among the various restaurants, resorts and even lava rock formations scattered along the side of the lake, in which the latter makes a perfect spot for fishing enthusiasts trying out their luck. Clearly the entire area of Lake Kawaguchiko made the ideal destination for those looking to get away from city life. Cycling down further on for another half an hour, I chanced upon the Kawaguchiko Museum of Art. Opened from 9:30am to 5:30pm daily except on Tuesday, it is an 800 yen admission for adults, and showcases temporary and permanent exhibitions inspired by Mount Fuji. Being short on money, I skipped entering it and continued on cycling.

The entire cycling voyage alternated between cycling, having a rest at various cafes sprawled around the lake and working up my camera for a shooting rampage - only because the picturesque sights were too beautiful not to be caught on camera. This proved true while having a beer at a cafe right in front of the majesty of Mount Fuji - I photographed the moment on my trusty camera and on Instagram, inciting a few sparks of jealousy from friends. The cycle around half of Lake Kawaguchiko took roughly 4.5 hours. From halfway I decided to take a detour to Lake Saiko. I did not prepare for the arduous journey that was about to take place from one lake to another, and ended having to push my bike a few times up steep hills, and even having to carry my bicycle up stairs once. Backbreaking as it had been, it was worth it when I managed to catch sights of Lake Saiko. Along the lake were more quaint cafes and little houses, and even a dedicated camping spot where people parked their caravans and set up tents, perhaps spending their Golden Week holidays among a serene backdrop. At around 4:30pm, I decided to turn back and cycle back to where I initially detoured from, and cycled the remainder of Lake Kawaguchiko. By this time, sunset had already began and it was a beautiful sight seeing the remaining rays of sunshine cast their final, moody glow on the area. Heading back to Kawaguchiko Station, I returned the bike, and tried to get tickets for the direct bus that was heading to Shinjuku, only to realise that they've been sold out. Apparently reservations had to be made prior, and I had no choice but to journey through several train changes to get back home. Tired as my body and blistered as my feet may be, I was absolutely thankful for the amazing experience, for the beautiful weather, for this creation of nature that is Lake Kawaguchiko. 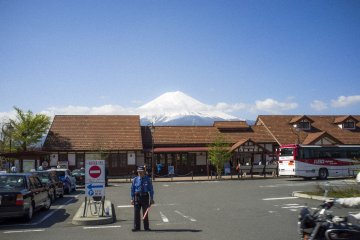 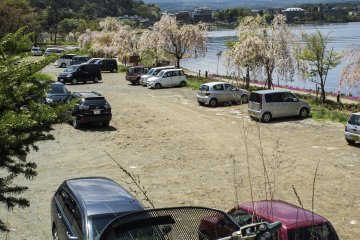 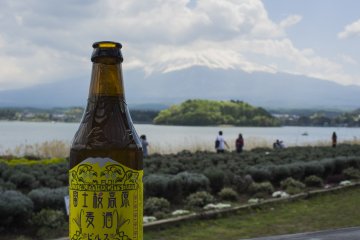 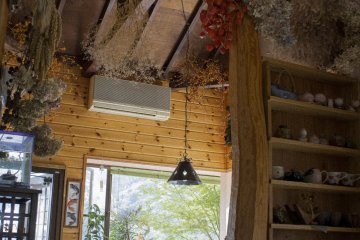 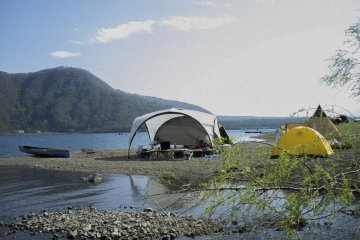 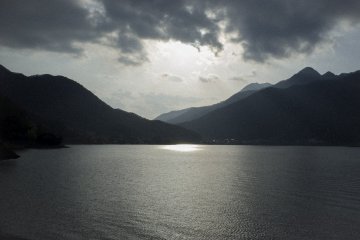