Sea of spectators mesmerized by the fine balancing act of the performer (Photo: Yo3up / CC BY-NC-SA 2.0)

This is going to be daunting. The heady mix of fire and summer courage, fused with the tribal sounds of folk songs and the thumping of drum beats send a rush of blood to my brain. The crowds are now clearly excited, their voices rising to a crescendo, shouting “dokkoisho, dokkoisho!” A solitary man begins to lift the bamboo pole, lined with candle lit lanterns ten meters high into the night skies, balanced precariously on his shoulders. The now upright lanterns are swinging from side to side, like an animated spirit on a drunken dance, just inches away from the power lines. Clearly this ancient tradition of Kanto dancing treads dangerously with the electrical superhighway.

Dokkoisho is a word you will hear a lot of at the festival. Its meaning however, depends on who you ask.

According to Rudolf Dittrich, whose music was performed in Madam Butterfly, Dokkoisho is a "vigorous song with chorus; sung by laborers, students and soldiers". Kind of like “Heave ho, heave ho, comrades, do it for the fatherland.” With words reminiscent of a communist anthem, it sounds like the Citizens Market down the road. It is quite apt, actually, when I think about the effort required by the teams to create and train with the Kanto lanterns. The skill and strength required to lift and balance a 50 kilogram pole would take plenty of heaving.

On the other hand, a Japanese guy tells me that “Dokkoisho” is an old person’s expression. When you are lifting something bulky and heavy, you utter “Dokkoisho” between breaths to push yourself, or you could mean “oops” when you are off balance. So it can mean ‘you can do it?’, or ‘watch out!’. In typical Japanese fashion, its multiple meanings articulates the swirl of emotions going through the performer’s mind as he teeters on a razor thin line between play acting and disaster.

Held from the third to sixth day of August, Akita’s Kanto festival is hot in every sense of the word. Oven hot and humid is probably a better word. At noon, I retreat to the air conditioned Neburinagashi-kan museum to study up before the festivities. They even let you try to balance these kanto poles yourself. I can imagine every boy in Akita growing up, dreaming of being selected one day of being selected to represent his town in this festival. It takes great skill and dexterity to be given the responsibility of lifting and balancing the kanto, as well as a steady heart that can bear the heat from the crowds as well as the ancients above. These days a champion Kanto bearer may even find himself on tour in France or the United States.

As the humidity settles on a warm evening, the atmosphere in Chuo Dori Street lights up as the sun sets. The stars are out and the many teams, proudly dressed with their town insignias on their short "hanten" jackets and hachimaki headbands are out preparing their kanto, long five to twelve meter bamboo poles that hold up to four dozen paper lanterns. The lanterns supposedly resemble ears of rice, though in these days of the agriculturally illiterate, they resemble sails filled with swinging lanterns, waiting for the captain to make the call to set sail.

Some people also say that this festival had its origins in Tanabata, the festival of the seventh day. Originally an ancient Chinese tale of two star crossed lovers, Tanabata celebrates the only day of the year that these lovers are allowed to meet. Looking upward at the starry skies, framed by the warm glow of the lanterns, it is like their flames are a prayer to the heavens.

As the largest event on the Akita calendar, the tourism bureau rolls out the red carpet to accommodate visitors. It is a long cry from a thousand years ago, when you were lucky to find a bush track deep in the forested mountains. Tohoku was known as Michinoku a thousand years ago, being the end of an arduous hike north from Kyoto. Many didn't survive the trip. These days you can get here in just ninety minutes, so better book ahead for a room at the inn or a box seat at the festival.

Being an undiscovered part of Japan (read "not much English is spoken here"), they have started a translation phone service in English, Chinese and Korean for the duration of the festival.

Outside the festival times, the English commentary and insights from japantravel.com came in handy, with its coverage of everything from cuisine to history.

The tourism information bureau at JR Akita Station also speaks English, so drop by and say hi to Yuko and her friendly team. Like many Akita folk, they are hardworking and patient. The tourism bureau is open everyday until 7 in the evening. 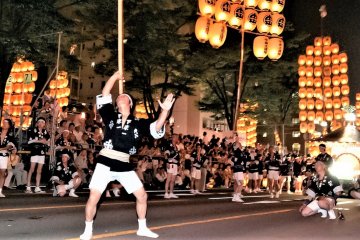 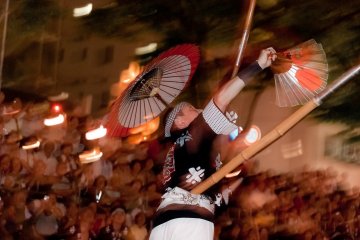 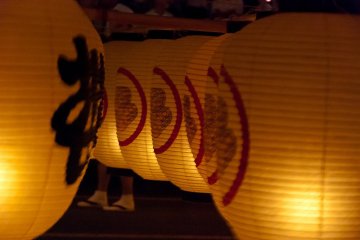 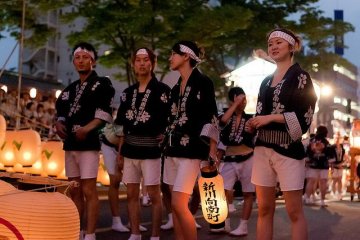