A ship's tale of service and sacrifice

There are many great locations to see near Aomori station, including the Wa Rasse Nebuta House and the ASPAM Building, but in the water there is a giant yellow and white ship slumbering next to the dock. This, of course, caught my eye, my adventurous eye. Just a few minutes’ walk from JR Aomori station is the Hakkoda Memorial Ship. Hobble up the gangplank and step aboard to see the conqueror of the Tsugaru Strait.

The water lane between Honshu, the main island of Japan, and its northern island cousin Hokkaido has posed logistical issues until relatively recently. Hokkaido is a huge island with many resources as well as people. The only way to get to or from the island has traditionally been ships. Shipbuilding advanced rapidly in the last few centuries; old wooden ships were quickly set aside while monstrous steel incarnations took their places. The Hakkoda Maru, as it is called in Japanese (“maru” means ship), is one of the lasting legacies of the great ferrying history that took place over the decades. Then in 1988, the Seikan Tunnel opened up to allow passengers and trains to access Hokkaido more conveniently and for less money. Until that time, the Hakkoda Memorial Ship was king of them all.

Walking through the ship’s interior is a great pleasure. Exhibits detail the history of the ship itself and the time period the ship was in service. From 1964 to 1988, the ship was responsible for not only moving people and supplies, but entire trains! In the basement is a hull with railroad tracks that could easily fit dozens of train cars. A mechanical drawbridge used to allow access to the ship’s basement from the outside. There are even some train cars on display. Upper floors show period cameras and daily goods, what rooms on the ship looked like, and several very detailed and beautiful ship models. A long passageway on a far side of a ship is lined with classic and comfy chairs facing toward a television monitor. The program can be misleading if you don’t know Japanese. One part shows ships that made the same route as the Memorial Ship being shot down by Allied aircraft. However, Hakkoda Maru was made after WWII so don’t become confused. There is a restaurant and gift shop on the ship if you feel like spending more money. The ship takes a long time to explore if you want to view the exhibits and peek into the nooks and crannies. I was there well over an hour, but I am quite the adventurer, mind you.

Keep walking and following the conveniently placed tape on the ground for your self guided tour. The website (Japanese only) mentions that there are occasionally tours held on the ship, but there was none when I went. Consider calling ahead if you are interested. In either case you’ll eventually reach the ship’s bridge. Here you can view the control room of the ship. Behind you on the wall is a charming display of different types of navy knots. The ship is also host to a marine boy scouts group from time to time, so they may have something to with this. The windows are a little hard to see out of, so make a u-turn and go towards the light.

You have reached the top deck of the ship. You’ll be rewarded with the beautiful scenery Aomori Bay has to offer and fresh air courtesy of the salty sea. Your legs might hurt by this point, but you can still go a bit higher if you climb up the ship’s smokestack (there are stairs, so don’t be a Spiderman). Use this chance to take some pictures and capture the memories.

The Hakkoda Memorial Ship united Aomori with Hokkaido before a modern tunnel took its place. The ship is a history museum and floating legend. There is so much to learn here and every turn in the ships narrow corridors offers a new surprise. 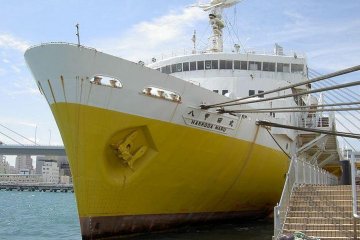 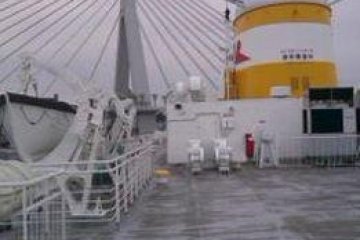 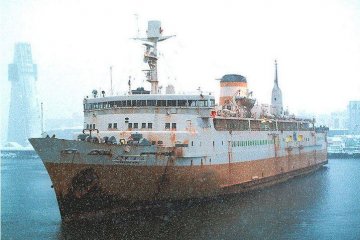 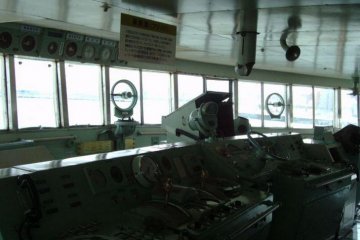