Drive into the heart of the mountains, find the wooden staircase descending the hill, it will lead you to where a secret cove opens up to a spectacular sight. Stretching across 2 km of coastline is Hotokegaura, the "Buddha Inlet". Jetting up from the beach are dozens of rocks, boulders, and cliff sides shaped into irregular patterns by eons of wind, wave and rain. The first people to name the place thought the formations looked like the various statues of Buddha and other figures from Buddhist teachings. Thus, you can find one rock named "the head of Nyorai (Buddha)" or the jagged cliff "Gohyaku-rakan" in reference to the 500 disciples of Buddha, or the hidden spring of longevity off shore in a rock pool. Some come here to reflect on Buddhist thought, while others come to take in the breath taking sight of it all.

From the parking lot you access the inlet via a path which becomes a staircase built into the hillside. Once you get to the beach wooden footbridges crisscross the sand so you can reach all of the coves. There's a shrine on the beach for offering up prayers. A vending machine at the trail's beginning for drinks. And a great aerial view of the inlet if you drive out of the parking lot and head East (turn left), drive for a few kilometers and the first parking lot on the left offers a scenic view of the bay.

Hotokegaura (Hotoke＝Buddha, Gaura＝Inlet) is located on the far western shore of the Shimokita Peninsula in Northern Aomori, right next to the village of Sai. It exists in an isolated place, adding to the challenge of accessing it, yet also to the enjoyment of a beautiful place off the beaten path. The nearest populated area is the village of Sai, with a population of slightly higher than 2,000, and about a 30 minute drive away.The largest town in the peninsula, Mutsu with a population of 59,000, is about an hour and a half drive away. This distance from populated areas makes for an unforgettable drive out to the inlet. The whole west coast of Shimokita is full of mountains and forests, which in and of themselves are quite the sight. At the highest points of the drive, you can see the ocean to the one side, right below you, and and expanse of mountainous terrain to the other side.

Also, monkeys! You heard right my friend. The Japanese Macaque is, aside from humans, the most northerly dwelling primate in the world. On most days you can see troops of monkeys crossing the road or just chilling on the side. Note: this is not a promise that you will see them. From the author's experience, on about 5 drives out of 10 to Hotokegaura, monkeys were witnessed in all their frolicking. One word of caution: the monkeys are not used to people, meaning they can be dangerous if you mess with them. Also, there is a high bear population near Hotokegaura, which is not a problem if you take proper precautions. In addition it's possible if you're lucky to view other wildlife such as tanuki (Japanese raccoon dog) and kamoshika (a deer that looks like it was blended with a wolf in some crazed scientist's lab).

The site is best accessed by car. There are no train stations nearby but busses can be boarded in Mutsu. Here's the website, in Japanese only, for the bus schedule: http://www.0175.co.jp/s/s-bus/sai-dn.html

The map pinned to this article will take you directly to Hotokeguara's parking lot. From there it's a 10 minute walk downhill from a well kept and posted trail next to the parking lot. The hike back up the trail will take about 20 minutes at a moderate pace. There is a vending machine with water, tea and soda at the trail's head. The closest gas station is in the town of Oma to the north (45 minute drive) or Kawauchi to the south (1 hour drive). There might be one in Sai (30 minute drive north) but I have never seen one there.

If you are looking for adventure, to see some of Japan's wild and untouched marvels, make time for Hotokeguara. 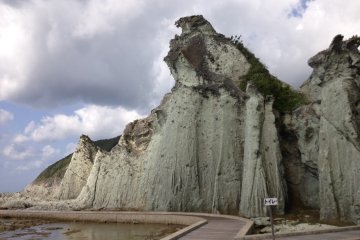 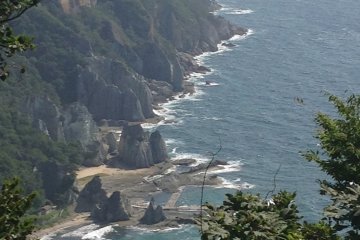 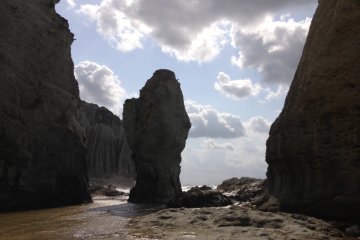 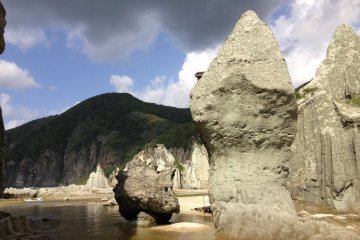 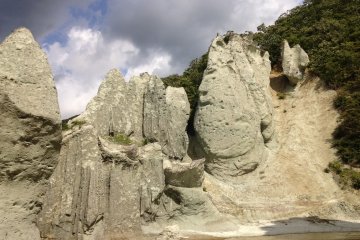 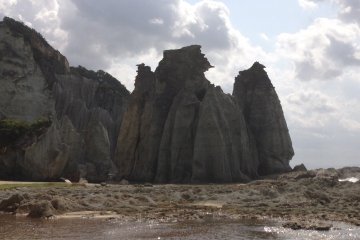