On November 5th around 4:20am, there was a fire at Kabushima Shrine in Hachinohe, Aomori Prefecture. The blaze razed the main shrine and shrine office. Kabushima Shrine is a major local tourist attraction because of its status as a national natural monument: a black-tailed gull breeding ground. Approximately 40,000 brids call the hilltop shrine next to the sea home each March to winter. At 4:25am a fire detector alerted a security company to fire. The flames were fully extinguished at 9:15am, around 5 hours later. There were no reported injuries. The fire was determined to start not from inside, but from the west side of the shrine. Three days earlier and 250 meters to the south, there was a suspious trash fire inside a building that had not been used in 20 years. Police are investigating if there is a connection between the two events.

According to the City Board of Education, the shrine was built in 1296. The building burned down in 1780, then was rebuilt the next year. A large-scale renovation in 1977 gave the shrine its most memorable appearance until being burned down. 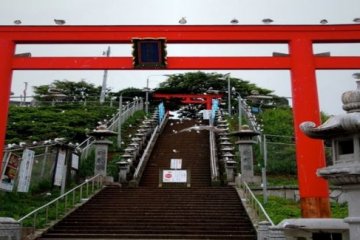